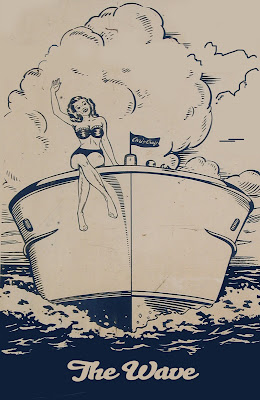 I am not sure when the “wave” started. I suppose Christopher Columbus waved at Queen Isabella as he arrived back in town. The tradition goes way back in time. From what I can tell though there are different sorts of waves. The “I am sailing by slow wave” The “look at me in my boat wave” The “work boat wave” That wave is always short and with out meaning. The poor guy is working and not impressed with himself being on the water. but tradition says he has to wave or you will think ill of him. There is the “I am sick of waving wave” usually done by a boat owner with guests on board. There is the “Sea Captain wave”it’s more of a tradition there. This story though is on “the classic boat wave”. I have dug through countless books and photos looking for the archetypal Woody Boat wave. Is there one?

Things did not start out well in the early 1920’s for the wave, most shots were taken with men driving the boat and everyone sitting there. Was the wave dead? No just bad photographers were most likely to blame and boat builders wanting you to focus on the craft. The drivers were only there because it the boat needed to be driven . The wave became more popular in ads and post cards because the wave said come on, join us! It also balances out the shot. It adds focus to the humanity in the shot. Great landscape always has a person in it. And that is why the wave. Garwood used racing shots and photos of himself. Dodge boats used the wave every now and then, same with Century and countless other brands. The mother of all wave users was clearly Chris Craft. They also strongly believed in the power of branding as well understood the power of emotional selling. It’s one of the reasons that we love the brand today. So I suppose if there is an iconic Classic boat wave it belongs to Chris Craft. It’s a unique sort of wave. Much different than the “work boat mans wave”. It’s a more confident wave.,a happy wave, fingers more straight, not a cup wave, a medium speed wave, not to slow or flag you down wave like a 10 year old on there first boat trip. The cool thing is that in our subconscious we have kept that wave alive. We use that same wave. Hand held up high, waving. Saying come on join the fun in a classic boat. Wave on fellow classic boaters, wave on.

4 Responses to “The Classic Boat Wave Is Alive And Well.”