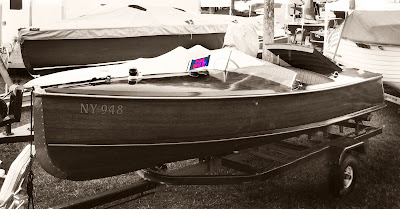 With the possibility of a recession looming has the un-easiness effected the classic boat community? Will it? To be honest I don’t know, in no way do I consider myself an expert on this subject. And for that matter I scratched my head to think of someone that might be. So, I got on the phone and email machine with some of the big boys in the brokerage and restoration business. The good news is that the feedback was consistent. I spoke mostly to Lou Rauh at the Antique Boat Center. and Mitch LaPointe at ClassicBoats.com And for the record, both also said they they were not experts in economic matters of the country. Warren Buffit was not available to talk to Woody Boater…Warren, just hit comment below this story if you want to chime in. So Lou and Mitch became my forum.
Lou said it best. An “Antique & Classic boat is a great place to park your money”. The market is still solid. Prices are still on the rise. Although soft December sales are the same as last year if not better. “We had a record year last year and in fact have had 3 record years in a row” that from Mitch LaPointe. There are several key factors to the strength of the classic boat market. Most of these boats are paid for in full. No loans. Last year LaPointe had one sale using a loan. These buyers have a good amount of disposable income. Lou agreed with that statement. Also restorations are becoming much more sophisticated, and expensive. And folks want to get there money back so the numbers at sale time reflect that. Another huge factor is that some of the big boys in the classic car world are discovering boats seeing that they are still a bargain by car standards. Watch Barret Jackson, a million Dollar car is not that uncommon. A million dollar boat is un heard of. Lou knew of one.
I brought up the idea that most folks buying boats no doubt had the money for homes on the water. And therefore were less effected by the recession. Lou thought for a minute and added that the largest growth area was in fact from folks that trailer there boats. The creation of No Soak bottoms has opened up the market in a huge way. You can now own a great antique boat, store it in your garage and take it to shows and fun destinations. No home on the water needed anymore.
According to Mitch LaPointe it’s more of a type of boat that is effected by supply and demand. During the 50th anniversary of the Chris Craft Cobra sale prices sky rocketed, and have since somewhat settled down a little, 1950’s Chris Craft racers, they were hot and then not so much. One boat though has stayed the course. The Chris Craft Barrel Back. Mostly because of it’s iconic status. Barrel Back is a term wrongly used as a description of all woody speed boats. Right or wrong. It’s the Kleenex, Clorox of the category. Prices on barrel backs are very solid. Ranging between $17,000 for a 17 foot needing restoration, and $150,000 for a fully restored triple. It all still comes down to a supply and demand issue. The only real glitch in the market came years ago when a wealthy widow unloaded 100 or so boats onto the market. Huge supply, and thus drove prices down.
With these boats becoming harder and harder to find, and the fact that unlike cars that can sit and left alone, there is always going to be very little supply, and with the explosion on line of Classic Boat information. The demand is bound to increase.
One area of concern is the boomer factor. Many boomers grew up in the 50’s. And that was the end of such woody boats. So the memories and emotion are from that period. Look at model A’s. And then look at a 1969 Z/28 Camaro. A nice Z/28 can now fetch close to $100,000. Model A’s sit at around 20,000. The big challenge facing the Antique & Classic boat market is to somehow make these boats relevant to a younger audience. To re introduce Woody speed boats to folks under 50. To engage them and continue the passion. Hopefully my kids will fight over my boats when I am gone. Not Beenie Baby’s.