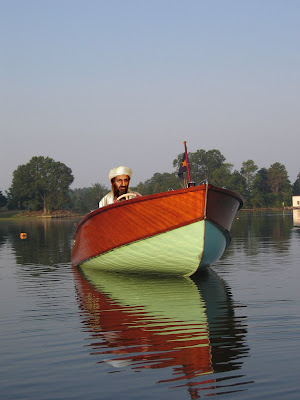 OK my home is now worth half of what it was, I can’t afford to fill up my Suburban, and now this. According to CNN.

WASHINGTON – As boating season approaches, the Bush administration wants to enlist the country’s 80 million recreational boaters to help reduce the chances a small boat could deliver a nuclear or radiological bomb along the country’s 95,000 miles of coastline and inland waterways.

According to a Wednesday intelligence assessment obtained by the Associated Press: “The use of a small boat as a weapon is likely to remain al-Qaeda’s weapon of choice in the maritime environment, given its ease in arming and deploying, low cost, and record of success.”

While the United States has so far been spared this type of strike in its own waters, terrorists have used small boats to attack in other countries.

The millions of humble dinghies, fishing boats, and smaller cargo ships that ply America’s waterways are not nationally regulated as they buzz around ports, oil tankers, power plants, and other potential terrorist targets. This could allow terrorists in small boats to carry out an attack similar to the USS Cole bombing, said Adm. Thad Allen, the Coast Guard commandant. That 2000 attack killed 17 U.S. sailors in Yemen when terrorists rammed a dinghy packed with explosives into the destroyer. “There is no intelligence right now that there’s a credible risk” of this type of attack, Allen said. “But the vulnerability is there.”

To reduce the potential for such an attack in the United States, the Department of Homeland Security has developed a strategy intended to increase security by enhancing safety standards. The Coast Guard is part of the department.

Today, officials are to announce the plan, which asks states to develop and enforce safety standards for recreational boaters and asks them to look for and report suspicious behavior on the water – much like a neighborhood watch program. The government will also look to develop technology to help detect dangerous materials and other potential warning signs.

The United States has spent billions of dollars constructing elaborate defenses against the giant cargo ships that could be used by terrorists, including strict regulations for containers and shipping. “When that oil tanker is coming from the Middle East, we know everything about it before it gets here,” said John Fetterman, deputy chief of Maine’s marine patrol. But when it comes to small boats, he said, “nobody knows a lot about them.”

The only way to police the waterfront, said maritime security expert Stephen Flynn, “is to get as many of the participants who are part of that community to be essentially on your side.” Flynn, a fellow with the Council on Foreign Relations, said treating boaters as allies instead of a threat would go a long way.

The government has taken tentative first steps to secure the waterways, but at a much slower pace than the effort aimed at large container ships.

Officials say small boats are not the top terrorist threat facing the United States. But the nation shouldn’t wait to be attacked, said Vayl Oxford, the head of homeland security’s Domestic Nuclear Detection Office: “We just cannot allow ourselves to get to the point where we’re managing consequences.”

Oxford’s office is leading two pilot programs that train and arm harbor patrols with portable radiological and nuclear detection equipment, starting with Seattle’s Puget Sound. A similar program for San Diego is in the planning stages. Allen says the boater who is on the water every weekend knows where people fish and when a boat near a piece of critical infrastructure looks out of place. “

The small-boat community is not the problem,” he said. But he added that with this strategy, it would now be part of the solution.

I give Osama one head gasket change and a blown manifold before Al Quada decides this is a dumb move.

4 Responses to “Ahhhhhhhhh Crap! Osama Boater Is Out There. What's Next?”