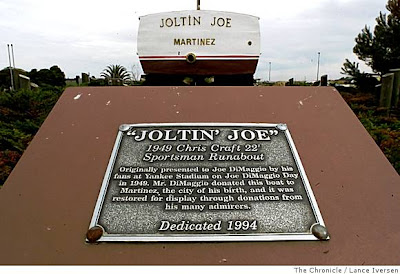 Thanks to fellow Woody Boater Scott Sawyer for spotting this article in the San Fransisco Chronicle.

Joltin’ Joe, the sleek pleasure boat that baseball legend Joe DiMaggio once used to romance his bride Marilyn Monroe, could be headed for history’s trash heap. 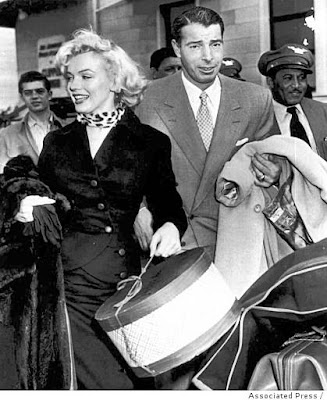 Since 1994, it had been perched proudly on a pedestal at the marina in Martinez, the town where the Yankee Clipper was born and where his family fished for a living – but then, a year and a half ago, it disappeared.

Alarmed tourists and townsfolk ever since have been asking where it went. The answer can be found a few hundred yards away from the empty pedestal, in a warehouse of theater props.

There, beneath a poster for the play “You Can’t Take It With You,” the 22-foot Chris-Craft sits rotting. The white and red hull paint is flaking from stem to stern, two fist-size holes have decayed in the sides, and the once-glossy mahogany prow is so caked with dirt it is gray.

There is no plan to restore it.

“It’s so sad for this community, when its very heritage is allowed to rot and they don’t do anything about it,” said longtime community activist Paul Wilson, who like many Martinez residents chatted with the late slugger around town and found him to be a consummate gentleman. “I’ve been asking the City Council to do something about this for two years, and they always defer it – say the yacht club should fix it, or the community, or anyone else but themselves.

A lot of history is tied to that collection of boards decaying in the warehouse, fans of the boat point out.

Martinez has long treasured its claim as DiMaggio’s birthplace and home before he moved to San Francisco as a toddler. But the kicker is that he actually entertained his film-star bride right after their 1954 wedding with a reception in Martinez and a cruise on – you guessed it – the Joltin’ Joe.

So when the Yankee Clipper donated the craft to his hometown in 1991, he gave Martinez a, well, jolt of civic pride.

But that was then. 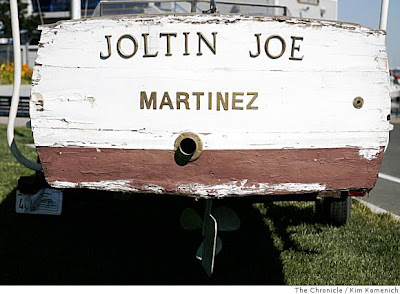 After a few years and $7,000 worth of donated restoration work, the boat was put on its pedestal in 1994. Then it proceeded to sit, unprotected, in the rain and wind and sun. By the beginning of last year, it had deteriorated to its present bedraggled state.

City Public Works Director David Scola quietly stowed it in the warehouse to await an effort at restoration. None came.

“You know, there’s a real following for the Joltin’ Joe,” said marina Manager Craig Paulsen, gazing sadly at the empty boat pedestal. “A few times a month, people come up and ask about it. It’s hard to tell them.”

The Joltin’ Joe was bestowed upon DiMaggio in 1949 in a ceremony at Yankee Stadium by fans grateful for his monster season (one of many) the year before, when he hit 39 homers and posted a .320 batting average. Gracefully crafted of first-class materials, the vessel was one of the premier boats of its day, capable of hitting 33 mph and looking classy doing it.

DiMaggio, however, was never much of a boat fan, despite his family’s fishing heritage. He loaned the craft in the 1960s to his brother, Vince, who then turned it over to their cousin, Mike DiMaggio. The cousin used it for fishing until his death in 1991. The boat floated unused in the harbor for a few months until marina managers discovered that Martinez’s most famous son still owned it.

The managers asked DiMaggio if he would donate the boat to the city. Much to their surprise – the slugger was famous for only rarely making official visits to Martinez – he showed up and signed over the pink slip.

True to his ultra-private form, the real Joltin’ Joe was a no-show for the ceremonial unveiling of the restored boat. But to his fans, that didn’t matter much. Having the boat was what counted.

“This breaks my heart to see it like this,” said Scola, who had the boat hauled into the sunlight so The Chronicle could closely examine it. “I come from a family of fishermen, but it hurts even more because I’ve been a Yankees fan all my life.”

One person who visits the boat now and then in its warehouse, for nostalgia, is 79-year-old Alan Hagerthy, who used to fish on it with Mike DiMaggio. Hagerthy paid the restorers $100 for the engine – a Chevrolet V-8 behemoth the cousin had swapped in for extra thrust – when the boat was fixed up, but after keeping it in his garage for 15 years, he’d like to donate it back.

“I was going to use the engine in my boat but never needed it,” Hagerthy said. “Now that empty box they have on the Joltin’ Joe where the engine should be just looks funny. I wish someone would want it back. It’s too bad to let a good boat go to hell.”

The trouble seems to be that nobody wants to take the lead.

Martinez Mayor Rob Schroder said his impression was that the Martinez Yacht Club, the city historical society and marina officials were going to fix the craft.

“I’d like to see it refurbished and put on display – and I’ve said it would be a great community project,” said Schroder. “But those wooden boats take a lot of work, and nobody’s really taken the bait yet at addressing this.”

He said one idea has been to move the boat to the town’s train station. But it’s just an unformed idea.

“I do know this, though,” he added. “If we do get this boat
refurbished, it can’t be displayed in the weather again. It has to be protected with a top.”

A pain in the stern

Yacht Club Commodore Marina Faconti said she thought the city would fix the boat. Marina Manager Paulsen said he’d like to help but he hasn’t heard any proposals.

“As far as I know, nothing has been put in place,” said Martinez Historical Society President John Curtis. “We probably need to have a meeting.”

DiMaggio died in 1999 at the age of 84, and most of his surviving relatives are as famous as he was for shunning the spotlight – so no DiMaggio has been publicly involved in the boat crisis. However, the star’s cousin, Walnut Creek barber Sal DiMaggio, said maybe they don’t have to.

“That boat has been kind of a pain in the ass,” he said. “You know – a guy refurbished it, Joe wouldn’t come to the ceremony, and that kind of pissed people off, and now it’s just sat there for years.

“Maybe they should let it rot. There doesn’t seem to be any appetite for restoring this thing.”

One Response to “Joe DiMaggio's 22 Foot Sportsman Striking Out.”