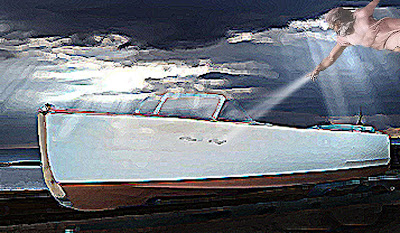 When I started getting interested in Antique & Classic boats. I had no idea about the difference between Runabouts and Utilities. It was just about varnish and a cool look. “Like the boat in, On Golden Pond” Well as we all know it’s not that simple, nothing is. But I was very attracted to runabouts, and from what I can tell from values of these things , so do most folks. The average price for a runabout is about double of a utility. So why even restore a utility. Wood is wood, labor is labor. It seems like a bad way to spend ones money. I have been rubbing my head trying to see why folks keep there utility’s going. Here are some insights I have gained in the few years about Utilities. One. You can actually use them! Seems like an obvious one, but when ya want to go fish’n in style. My barrel back just does not cut it. Second, you can take the kids, dogs and cooler with you places. Three, the folks that own them, keep them, mmmm Kinda like finding a good restaurant. Look for the cars in the parking lot.
At this years St Michael’s Boat show, I was asked to Judge Runabouts. As I was doing so though, my eye kept looking at two utility’s. Why? Kinda like going to the prom with a cheerleader and yet being attracted to the Home Ec teacher… And then it hit me, these darn utilities are the next step in classic boat enlightenment. I am on the path my brother to eternal Woody Boater salvation. And the next river is to be navigated on a pre-war U22.
I want to thank two great folks and there utilities for showing me the way. Ebby Dupont and his beautifully restored Lyman. 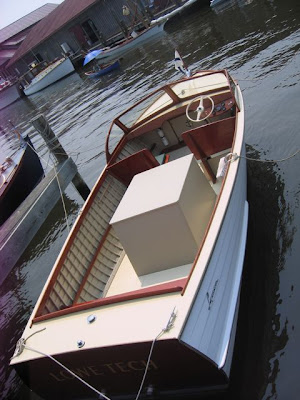 Ebby owns over 250 feet of Varnished wood and yet a twinkle lights up in his eye when he speaks of Lowe Tech. “It starts on the first turn of the key” he says with pride. The other boat and evangelist of Utility pride was Gene Porter and his 1942 U22. Dang, I had met him and his boat at the Mt Dora show, and apparently was not ready to be given the gift of utility vision. But this time it hit me. I was like a teeny bopper at a Elvis concert. What was and still is so funny, is that Genes U22 is about as frumpy as my grandmothers living room. Well worn, nice design, and very comfortable. This U22 had had very little top side work, all the seams were yellow with countless coats of varnish, there were dings and general use markings in all the right places, even her name the Nancy Lee was done in gold paint, 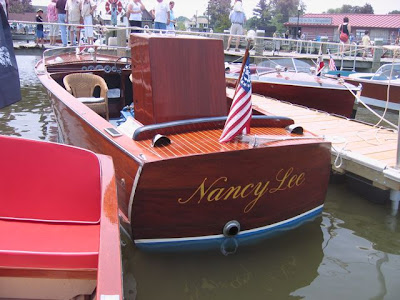 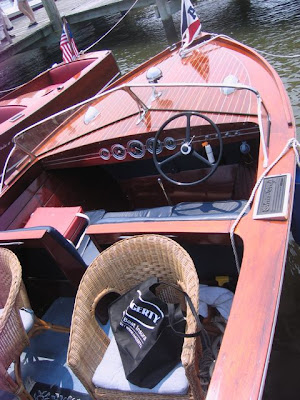 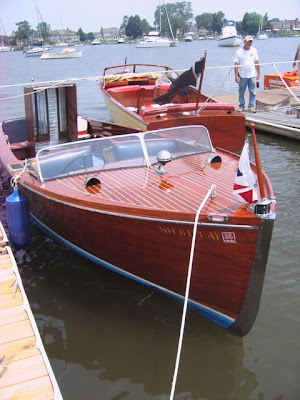 not the gold foil of her harlot neighbors at the show. He has had the bottom done and some frame work, but has made the wise choice of leaving everything else alone and just maintaining her. And the result is Woody Boat perfection. She is the real deal.
So here I am at the prom with Sylvia my new shiny overly restored 1941 Barrel Back, and lusting after one of the chaperone’s. Dang! I am getting older…..

One Response to “I Have Seen The Utility Light.”