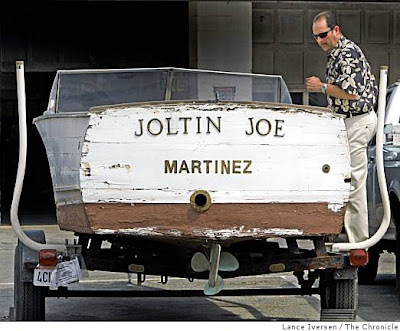 Thank god! Someone has stepped up to the plate to bring Joe back to life. As I have always said. Varnish and paint can work miracles! Here is the latest Article on the subject AND a place were you can send mula to make this happen. Now, we just need to work on bringing Marlyn back to life! Wooohooo. 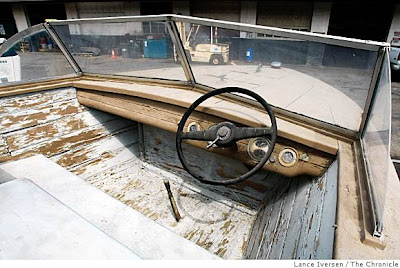 The once-nifty motorboat that carries baseball legend Joe DiMaggio’s nickname may not rust and rot its way into historical obscurity after all.

Upon reading last summer that the Joltin’ Joe was damaged so badly by rain and scorching sun that it is falling apart, hundreds of people called Martinez City Hall with offers to help – and that has led to a fundraising drive.

Organizers estimate they need at least $50,000 to restore the 22-foot Chris-Craft, which sat for many years on a pedestal at the town waterfront after the slugger, who died in 1999, donated it to his hometown of Martinez in 1991. So far, $1,850 has been donated or pledged, but the effort is just getting under way.

“We’re going to be asking everyone we can for money, all over the country,” said Ray Raineri of the Diablo Valley Lodge of the Order of the Sons of Italy, which leads the fundraising drive. “It was a project waiting to happen, and for God’s sake, we’re going to try to do our best.”

He said posters and brochures are being printed asking for donations to the restoration fund, and he and his fellow lodge members will post them in the coming weeks all over the region in stores, coffee shops and other businesses. They also intend to hit up civic and sports organizations, as well as the 600,000 members of Sons of Italy chapters across the nation.

“We’re not looking for a lot of money from a few people, but a little money from a lot of people – from the Little League parent who can put down five bucks to the coach who can give $50,” Raineri said. “It comes down to the average man and woman who has an interest in baseball, in Joe DiMaggio and in the Joltin’ Joe boat, which there is only one of in this world.”

Raineri noted that the original drive to raise $7,500 to refit the boat and install it at the marina in 1994 took three years. He expects this drive will take awhile, too – at least a year.

The Joltin’ Joe was once one of DiMaggio’s most prized toys.

Given to the “Yankee Clipper” in 1949 by grateful New York Yankee fans, the boat back then was a state-of-the-art pleasure craft, built of gleaming mahogany and capable of hitting a brisk 33 mph.

Born to a fishing family in Martinez, DiMaggio liked to motor around the bay in his boat during visits back home – once, famously, with bride Marilyn Monroe after their 1954 wedding reception in Martinez. He grew tired of the Joltin’ Joe by the 1960s, though, and loaned it to relatives. They used it for – you guessed it – fishing until 1991, when the cousin who fished the most died.

DiMaggio promptly donated the craft to Martinez, which turned it into the outdoor waterfront monument to its most famous son.

Time and weather, however, took a nasty toll over the next decade. As reported last summer by The Chronicle, city workers were alarmed that the craft’s wood had rotted through in spots and its white-and-red paint was peeling stem to stern. They moved it into a theater props warehouse in early 2007. It has sat there since.

Martinez Mayor Rob Schroder said the city’s public works staff is still working on restoration project details. But the early word is that the refit could take a year and cost anywhere from $50,000, with volunteer Chris-Craft enthusiasts doing the work, to $120,000 for a professional going-over by wooden craft specialists.

“Whatever we do, when it’s done, that boat is going to be displayed under a covering so it won’t deteriorate again,” Schroder said. He favors suspending it by wires inside the town’s train station.

Also pitching in on the effort is a man who actually plied waves in the boat with the Yankee Clipper himself – Tommy Billecci of Martinez, one of DiMaggio’s many cousins.

“It was a great boat,” Billecci said. . “He and I used to get seasick once in a while when we’d go fishing on other boats, but never on that boat. It always had a very smooth ride. It ran good.”

Billecci is trying to find old photos of the craft that show the small cabin that used to rise from its deck. The deck was torn out by another cousin long ago to make more room for fishing poles and nets. Now the restorers would like to re-create it.

“We just can’t find any good shots of it that we can use as a guide for redoing that deck,” Billecci said. “I’m looking everywhere.”

Martinez harbormaster Craig Paulsen said he has fielded calls from people all over the nation wanting to buy the Joltin’ Joe, but he flicked them away fast.

“I just said, ‘Are you kidding? It’s not for sale!’ ” Paulsen said. “I mean really, this is history we’re talking about.”