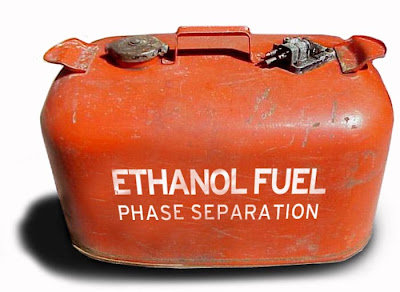 As you may recall we did a story on this very issue back in Sept. The story was on making sure we all used fuel stabilizer for Ethanol additives. This is a reminder as to why, plus a tip to keep your tank full. The story is dated in Sept as well. But worth reading and running out to the barn. What a pain. That darn corn. Sure it’s great with butter on it. But in my gas tank! Ugh!

Ethanol-laden gasoline, dubbed “E-10” for its 10% ethanol content, is now commonplace at marina fuel docks across the country. However, as winter approaches and boaters lay up their vessels for the season, Boat Owners Association of The United States (BoatU.S.) has some recommendations to ensure that spring commissioning will go smoothly. That’s because E-10 can phase separate, or form two separate solutions in the gas tank – water and fuel – over a long winter storage period. Once this happens, the engine may not run and internal damage can occur.

BoatU.S. has these recommendations for storing boats fueled with E-10 this winter:

· Top Off: For boats with built-in gas tanks, stop at the fuel dock and top off the tank before you haul out, leaving it nearly full with just a little room for expansion. A tank that is almost full limits the flow of air into and out of the vent, which reduces the chance of fluctuating temperatures adding condensation (water) to the fuel, inviting phase separation. Anglers who fish over the winter should also top off their boat’s gasoline tanks between outings to prevent condensation. Draining built-in fuel tanks of E-10 gas, while completely eliminating any chances of phase separation, is not practical and potentially dangerous.

• Freshening doesn’t work: Midwest marina owners, who have dealt with E-10 for many years, report that phase separation typically occurs when boats are stored with tanks only one-quarter to one-half full, which cannot be remedied by adding fresh gasoline in the spring. Once E-10 phase separates, the water will remain at the bottom of the tank.

• Additive issues: With any fuel that sits in a tank for a long time, it’s important to add a stabilizer. But stabilizers do not prevent phase separation. Once it occurs, additives and water separators can’t help. The only remedy is to have the gas and ethanol/water professionally removed from the tank.

• Fiberglass tanks beware: Ethanol is known to chemically react with many fiberglass fuel tanks, which can cause them to deteriorate and potentially fail. Unfortunately, unless your boat’s manufacturer can confirm that your fiberglass tank was built to withstand ethanol, your only remedy may be to replace the tank with a non-reactive material such as aluminum.

• Let it breathe: While ethanol does attract moisture, never try to plug up a fuel tank vent to prevent moist air from entering a tank. Without room to expand, the additional pressure could rupture fuel system components.

· Portable gas tanks: Any un-mixed gas (without 2-cycle oil) remaining in portable tanks may be carefully poured into your automobile gas tank. However, if you do have to store gas over the winter in a portable tank, keep the tank out of the sun and in a well-ventilated area away from ignition sources, keeping in mind that gasoline fumes are heavier than air. Recent BoatU.S. Foundation tests of portable jerry jugs confirmed that over time, gasoline can evaporate through the walls of some plastic containers.

• The good news: Next spring when you start the boating season you will already have a tank full of last year’s gas, likely saving yourself some money on a fill up.