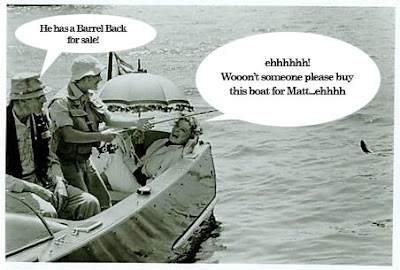 As I am sure you are watching the drama playing out on eBay and now the newspapers, and TV. Thayer IV is about to sell. With over 400 watchers and 10,000 hits…Ebay item here. The reserve of 40K has been reached and some lucky bastard is going to make off with my dream boat. And there ain’t a dam thing I can do about it. I could, if someone had bought my barrel back witch is now concreted to the floor of my barn….. Ahhhhhhhhh! I have spoken with Pat Curtin and everyone involved on this. Other than Pat, I know more details and in and outs of this movie boat thing than anyone should know…The boat also appears to need a mountain of work. But hey. That’s part of the fun. And it would make a fantastic item at the shows to promote woodyboater. So here is the deal. One of you guys out there with money poring out of your pockets. Buy it. And hold it. I will make it worth your while. A lay away plan of sorts, til the barrel sells… Then the boat will be restored the way it should be, and shown around the country with some other cool film stuff. Anyone? Anyone? SOLD $47,000 Story tomorrow

2 Responses to “Happy New Year. I Am In Golden Pond Hell!”