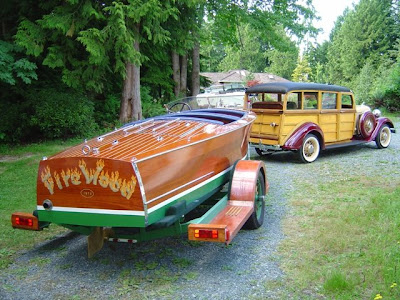 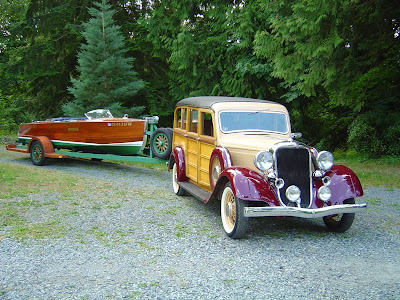 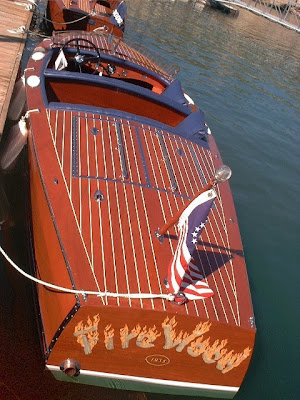 Thank god for the warmth of my computer. Once again eBay is creating entertainment for us all. This weekends special. Firewood! A very well known 1935 Dodge Watercar. Ohhhhhhhh! Dang, again. This is an amazing boat.. The trailer is worth the price alone… Here is the description as stated in the listing. Click to go to it.

One of seven built, One of two known to exist.

This Boat is the only one still operational and seaworthy the other is a basket case Formed in 1923 by Horace Dodge Jr., In Newport News Virginia the Dodge boat company has a brilliant and vivid history until it closed in 1935. Dodge Jr. chose to leave the automobile making tradition of his family to bring to market an affordable boat to the masses. Steeped with a life time of boat racing dating back to the first gold cup in 1904 Horace Dodge Jr. incorporated much of his racing knowledge into his pleasure craft.

Dodge chose to make each hull from African mahogany. Although more expensive and stronger wood that the traditional Philippine mahogany that other boat builder of the era was using. The construction of the Dodge Water Cars as they were known in the day was meticulous. After having a good run in business in the late 20’s and early 30’s the height of the depression and poor management of the business the dodge boat company closed it’s door in 1936. A very small number of Dodge boats were produced in 1936. 1935 marked the end of the dual cockpit runabouts.

This beautiful concurs and “best of show” restored 17 foot gentlemen’s racing runabout, model 103 is one of two known to exist. Of the seven built this runabout is number 103 or the third boat in this model series. This particular boat has been restored to its original glory with all original as built at the factory parts including the power plant. The other known boat is un-restored condition and missing the original power plant and most detail parts last known location was Newport News VA.

The model 103 was an expensive boat for the day selling at a base price of $945.00 only the very wealthy could afford this luxury and quality.

This boat is a dual front to back cockpit pit design with the engine located in the center of the hull. It rides very nicely and is extremely stable in in calm and ruff water conditions. At 17 feet it is powered by the original Dodge Grey marine 60 horse power engine. Completely rebuilt to factory specifications this runabout will cruise along at a respectable 32 Miles per hour. The in and out forward and reverse gearbox is smooth and precise.

The hull was completely dismantled and lovingly restored over 4 years to its current condition. Modern technology was used to seal the hull. The accepted practice of using a flexible polymer sealant between the double hull provides superior sealing over the laminated canvas as used during original construction. The restoration is remarkable! The impeccable craftsmanship and attention to detail shows throughout the boat.

Incorporated is the specific attention to detail and correctness right down to the Duesenberg 4 spoke steering wheel. A feature incorporated only by Dodge Watercar Company. This is a nautical piece of history it is the only one in the world! The sale includes the custom built trailer which rides in the original trailers wooden wheels. 4 wheels in total (2) spare mounted on the front frame support. I have towed this boat from Nevada to Seattle without issue. The trailer with Boat tows easily and true.

Complete photo documentation of the restoration is included in the sale. Full waterline cover is included as well as a different pitch propeller.

8 Responses to “Need To Warm Up…. Two Words…Fire Wood!”