It’s snowing like a dog here in Woodyboaterville, so I thought why not post a huge story. Here it is from Howard Johnson Jr of Old Time World. More than anyone ever wanted to know about Whirlwind boats. Unless you have one… Happy reading. stay warm. Only 24 days til Lake Dora… Wohooo.. 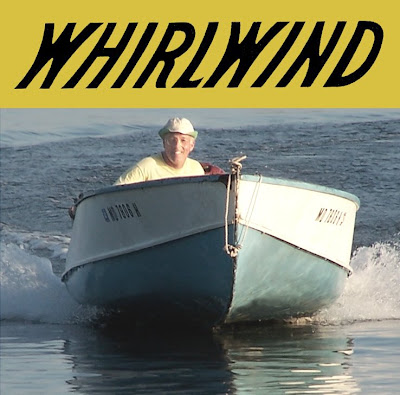 It is November of 1945 and the war is over. The United States Navy decides it no longer wants the molded plywood glider airplanes, being made on the assembly line at Allied Aviation, in Dundalk, MD. The management and workers stand, looking at the five finished and tested ones they had made and the fifteen more along the way. No further money will be available for operations, now; not even severance pay or rent on the big building. They decide to put the gliders aside and to build boats, using the veneer, glue and baking oven from the molding operation of the wooden airplanes. First they would have to move everything, at their own expense, to a new and cheaper workplace. A rented commercial building in Cockeysville Maryland, near Williamson Veneer Company is where they settled. As soon as they could, they built a solid wood hull shape called a mandrel, on wheels.

Whirlwind Construction; The layers of the mandrel are roughed in, ready for shaping. Some 40 different ones were created, one for every hull style and size, they were all on wheels. Five layers of veneer coated with heat actuated resorsinol glue made up each hull.
They fashioned a slot for the center keel and stem. To this, were stapled the edge of each layer of veneer. This was made of thin layers of mahogany, which had been coated with heat actuated glue. The layers were put on at a sharp angles to each other so that the grain could give maximum strength in both directions. Outside layers were coated with glue on one side, all the others, both sides. They were carefully trimmed and fitted together by ladies that were wives and mothers of other employees.After five layers, it was covered with a heavy rubber vacuum blanket with hoses running to a big vacuum pump. 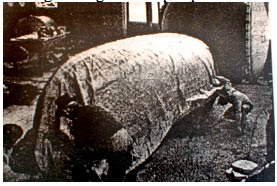 A heavy rubber vacuum bag was sealed around each hull before it was wheeled into the autoclave.

The whole affair was then rolled into the autoclave, a huge oven, and baked at high pressure and steam, for an hour at 375°. Really baked! 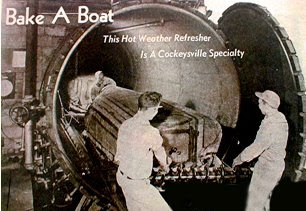 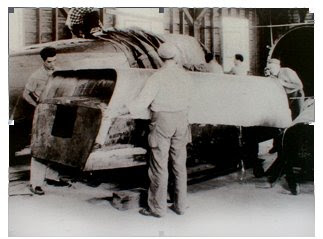 A hull is pried off the mandrel while still hot. Notice that the building was not insulated.

Once out,cooled, and uncovered, the fresh hull was pried off the mandrel, sanded, assembled and finished into a complete boat with transom, rubrails, seats and all features; then finished with varnish, with only the bottom painted a bright color.

After a few boats, in 1946, the owner of Allied decided that he wanted to stay in aviation and offered the operation to 3 of his employees, Ed Hewitt, Charley Abramo, and Charley Wingo.
All three had appreciated and enjoyed boats and worked closely together with great cooperation on gliders and were also good friends, so it was clear that they would be fully devoted to making a success of the new operation, Molded Products,Inc.

While building the gliders during the War, they had gotten to know the Williamson Veneer family. Their cooperation and fine quality sawn veneers made an extremely uniform and beautiful product. Most of the veneer they made was for furniture production, so the family took a special interest in the quality of the molding veneers supplied to the now, Molded Products Inc. of Cockeysville, Md.

When the Williamson’s found out that yet another place to work would have to be found, they offered an unused dairy barn on a farm they owned. Many months of sweat were shed turning that barn into a small boat factory. When Ed and the 2 Charleys found out that the Red Cross needed lifesaving canoes, they decided to build canoes. These were dazzling beautiful wood and light as a feather, yet ridgid and extremely durable. They then offered the Air Force a boat to test. They dropped the test boat out of a plane onto land where it bounced high in the air and was still good. They won the contract! This led to the building of a 35 sailboat fleet for the Naval Academy. Early pictures of the factory have these boats on the floor.

The boat factory at Cockeysville, Maryland

As was postwar practice, brothers and sisters, aunts and cousins were employed from the local area. Two of the founders of Molded Products were
long term members of the same community and now in retirement.The three founders, Ed Hewitt, Charley Wingo, and Charles Abramo each provided guidance for the different aspects of boat construction. Ed Hewitt was a CPA and office manager and made the advertisements. Charley Wingo did a lot of the design and drawing work, set up the shop and made constant production improvements; Charley was a perfectionist, they said. They all often worked all weekend. Charley was a personable, natural high energy guy that enjoyed smoking as well as racing activities. Everybody smoked cigarettes back then, It gave them an excited, bullet proof, -hard driving attitude.

Charley and brother Lou took the boats and motors and raced and set records. 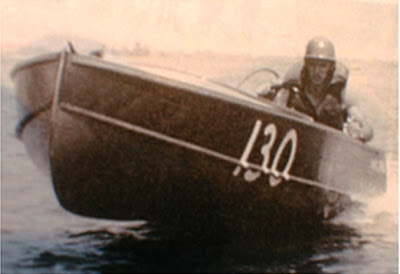 They made and offered for sale a cut down model of the winning racer. Following aircraft construction methods, all hulls were minimum thickness and all structural members glued, providing stiffness and ridigity, without extra weight. Charley Wingo and Charles Abramo slaved over the drawing boards together to come up with each new design. Many shapes, sizes and interior layouts were tried to offer something for everyone and to achieve eye pleasing styles. 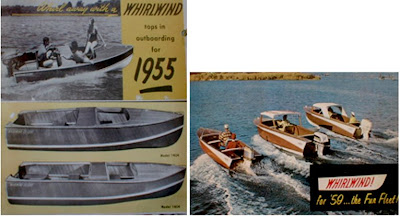 Early models were graceful and widely varied. In 1958, hulls were more roomy with increasing flare to the bows.

Boats were leak and rattle free while being light, colorful and well finished. In the beginning, attractive aluminium fittings were bought from the Baltimore foundry of H.H. Whiting Co. Later brass and then chrome plated brass was used. Charley Abramo was responsible for picking the finest cuts of mahogany planks at the lumberyard in Philadelphia. He was a stickler for high quality and the company put aside their best knot free, straight grain wood, for him.The sleek designs and high quality materials made them appealing to lovers of performance boats, all across the country.The rounded chine assured that full speed turns could always be made without sliding or loosing control. These features made Whirlwind Boats the lightest, fastest and most beautiful on the water, to this very day.

In 1999, Bob Orgain and Whirlwind World put on a special Whirlwind Commemorative Event at the ACBS Antique and Classic Boat Show, in St Michaels, Md., with 13 boats on display. 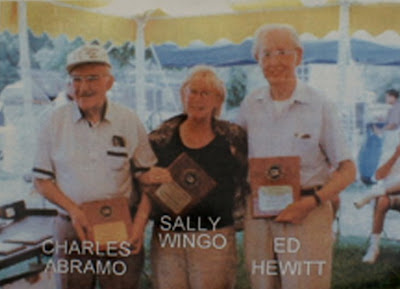 Bob gave Ed Hewitt, Charley Abramo and Sally Wingo, Meritorious Achievement Awards right after the Whirlwind Lecture. These awards and the Chesapeake Bay Magazine article on Whirlwinds were on display at the funerals of both lifelong friends who died at 92, in 2008. The wonderful qualities of the 15,000 boats they produced in the 15 years they built them, assured that many still remain and are treasured by their owners. This remarkable achievement will remain a lasting tribute to these men, their families and wooden boat building in Maryland.