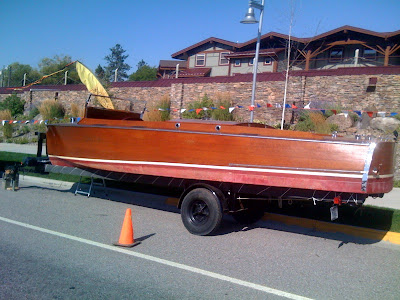 One of the best things about attending an antique & classic boat show is having the opportunity to see the beautiful boats “Up Close” and if your lucky, get to hear the boat’s story – because it seems like “Every Boat Has a Story.”

While attending the 2009 Big Sky ACBS Boat Show on Montana’s Flathead Lake, I had the pleasure of meeting Dean Sackett – a certified Woody Boater. Dean was standing next to his 1929 Chris-Craft Model 3 and explained to me that this was his future retirement project. Before long we were talking about Chris-Craft’s (Dean’s a fellow CCABC Member), restoration costs, the wooden boat hobby, boat shows, etc ….. and I asked Dean if he knew about WoodyBoater.com. With a big smile Dean responded, “Every day when I get home from work, the first thing I do is check my personal e-mails and then I go to WoodyBoater.com to see what’s there.” He said he likes the stories about Joe Martell…Who is Joe Martell?

Dean Sackett grew up on Lake Winnipesaukee, New Hampshire and has been around wooden boats all his life. He remembers going to the marina with his father in their wooden outboard boat and looking at the Chris-Crafts (which were a common site then) and dreaming of some day owning one. Dean purchased his first used Chris-Craft (a barrelback) when he was 19 and has had the wooden boat bug ever since.

Then, many years later, his continued interest in wooden boats brought him to “HOBO”, the 1929 Chris-Craft Model 3 24′ Runabout which he purchased in 2007 via Mitch LaPointe. “HOBO” was originally delivered to Lake Hopatcong, New Jersey in 1929 and prior to 2007 spent it’s entire life (78 years) in the same boat house. Here is a recent photo of the HOBO’s boathouse on Lake Hopatcong, NJ – courtesy of the current owner Tim Clancy. Tim is an ACBS member and owns a beautiful 1947 U-22 “Piggy Bank” (that’s right Matt a U-22) 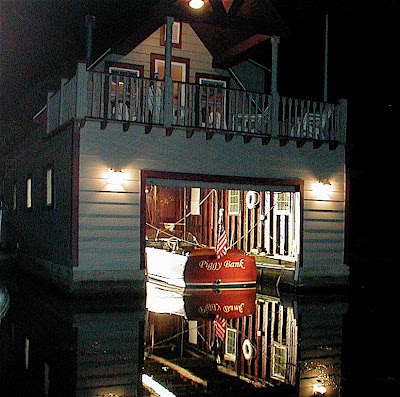 And now for the Rest of the Story – in Dean’s Sackett’s words…….. 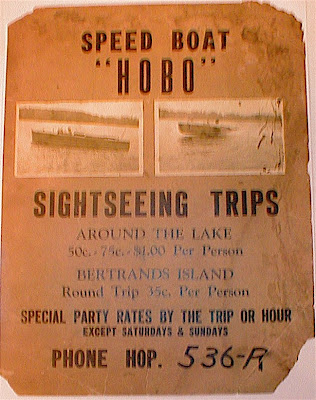 “HOBO” a 1929 Model 3, 24′ Chris Craft, Hull # 2349 was inspected on May 4, 1929. She was shipped by rail to New Jersey where she was purchased by Harry Tarakajian. Harry, a Well Driller by profession and the ultimate tinkerer, did not take immediate delivery of “Hobo” because he was waiting for his boat house on Lake Hopatcong to be completed. Harry installed huge steel I beams in the boat house for raising the boat and one put in place just to be able to pull the engine. The two story boat house had an apartment w/bar upstairs where Harry frequently entertained visitors from the city who went to Lake Hopatcong to escape the summer heat. Harry would also give people rides in Hobo. The story goes that on occasion Bud Abbott of Abbott and Costello fame would stop by for a drink at “Harry’s Bar” and a breezy ride in “Hobo”. Ancient history is that Bud Abbott summered and rented the upstairs of the boathouse from Harry in the 30’s or 40’s. (Current Boathouse owner said) “I just became aware of this from a neighbor two doors down when Grandpa Tom Miller came to a graduation party last summer. Talked to his son last week and said the HOBO showed up and the new owner was interested in the Hobo’s history and he said he would have his father come over next time they’re in town. I’ll see what else he might know, he’s probably is in his 80’s so he was just a child when Harry bought the boat. He was the guy that told me about Bud Abbott, his father used to tell him “you stay away and leave Mr. Abbott alone”.

By the Late 60’s, “Hobo’s” original 106 hp Chrysler LM was getting tired. Chris Craft had recently introduced their version of the 327 and Harry had to have one. So “Hobo” got a new engine and Paragon hydraulic transmission.

Dean has had a difficult time obtaining more historical information on “HOBO”. However, as a result of the Big Sky Boat Show report posted on WoodyBoater.com last Monday, Dean contacted us to say…….

I just thought I would let you know that a few hours after the blog was posted I received a call from a (fellow) WoodyBoater follower on Lake Hopatcong that knows the boat. He is very active in the wood boating community and is going to help track down some history. He said he thinks the original poster for HOBO Speedboat rides is in the museum there and he will get me a copy some time this fall. He said he will look through their digitized archives for data on the boat and the marina it was shipped to. I’ll keep you posted as the info comes in. Thanks Dean

Now that’s what I call “A Good Woody Boat Story” 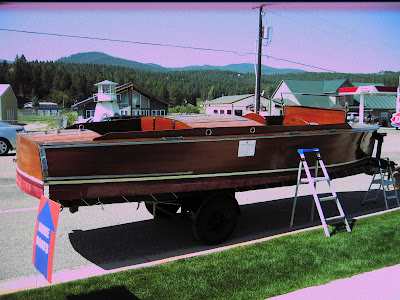 3 Responses to “Every Boat Has A Story, By Texx.”