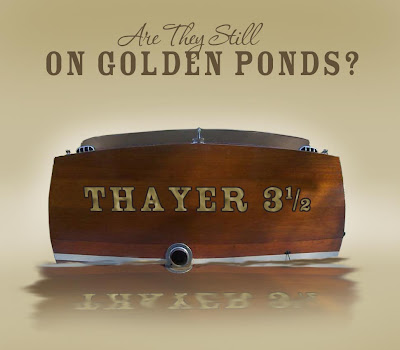 If you look around, chances are you have come across a Golden Pond U22… Or have you? One fellow owns a U22 and advertises it as a “Sportsman, just like the one on Golden Pond”, the next owner uses it and the story gets streamlined to “it’s the Golden Pond Boat”…and so on. The truth is there were three and a half of them. Two were used as shooting boats, these are the ones you see in the movie. One was bought and never used or filmed and sold off at the end of the film to one of the shop guys. And one half of one.. or more like two thirds of one was used in the hitting the rocks scene. That’s it! Of the three and a half boats out there, only one is known for a fact to be around and that is the wrecked one. And it is rumored to have been taken to the dump last year because it was termite infested. It sat outside of a hotel in FLA as an attraction. The were abouts of the one sold to the kid in the shop is not known lost in a broken trail of sales…. That leaves the two shoot boats. The prize… To date there were abouts are unknown. One sold on eBay a while back as we reported, but the sale can not be confirmed or can the boat. The other is with a family… or was years ago. And no one knows its history either.
Enter Pat Curtin of Old School Boat School. Pat was the movie wrangler on the film. He bought them and sold them. He is the sole person that knows how to prove the authenticity of these boats. Him and only him. And to date has not confirmed any of them except for the termite boat in FLA. It’s actually tragic that this is happening. There is a wonderful story to be told if only we could find and confirm one of these. With so many Thayer IV’s out there…The real ones may be lost in a sea of U22’s…..

13 Responses to “How Many Golden Pond Boats Are There.”