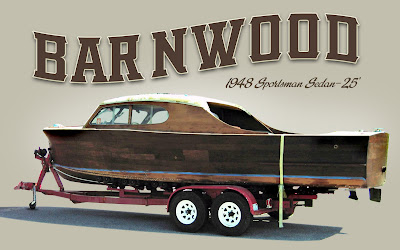 I first saw the boat on Woodyboater in the summer of 2009, in a submission of photographs by the intrepid roving reporter Texx, documenting the Big Sky ACBS Chapter boat show at Kalispell, Montana. There it was, a big, slightly forlorn looking 1948 Chris Craft 25’ Sportsman with a Deluxe 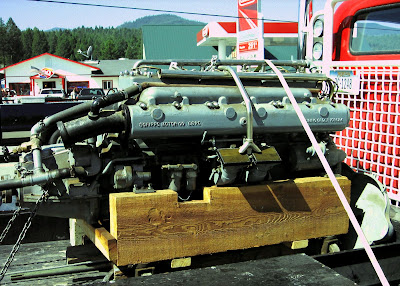 Ventilating Cabin, hitched to the back of an even more unique 1950 Chevy COE truck. The monumentally imposing original Scripps 208 is nicely displayed on the back of the old flat bed. Neat truck and cool barn find I thought, as I moved on to other pictures. 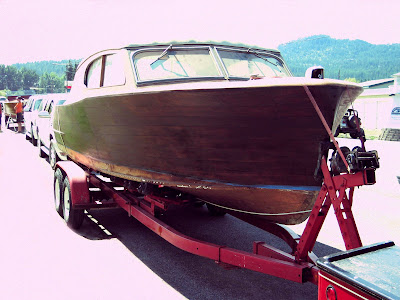 Fast forward about three months. I am on my way down to Portland to pick up a trailer for my Chris Craft BB and to also check in to see how restoration was progressing on our own unique sedan. As a favor to my good friend Dick Werner, I was planning to stop on the way down to Portland in Kalispell, MT to pick up a very nice little 1955 15’ Century Seaflyte that Dick had acquired. Why not just bring it on down and save Dick the trip? Well, after arriving I get to talking with the marina owner and start looking around the boat yard while hooking up the Century, and there it is off in a large shed – that big Sportsman from the pictures I saw in the summer. Can I take a look at it, I ask? Sure thing the owner says, go to town. This invitation is casually followed by the comment that he has had a guy interested in it since August but that so far nothing has come of it. Oh oh, I said to myself, where is this going? Is it for sale? Senses tingling, I decide that I had better really check this out. Although she was not with me, I am sure my wife Karen shuddered at that very moment! Well, what a great story this boat was! Delivered to Salt Lake City in 1948, the biggest and best and most costly Sportsman you could get. She was sold by the original owner sometime in the mid-60’s and had been on Flathead lake, or at certainly in the area since at least that time, perhaps earlier. Lightly used and properly cared for, but by no means babied. There are all kinds of records of expenses from the ‘60’s – it was barely used during those years. After changing hands again, the boat was used even more sparingly, if at all, until being acquired by the penultimate owner for $1000 on Sept. 11, 1974. She suffered the ignominy of being called a 26’ Chris Craft IB Clipper on the bill of sale. She was immediately placed in a barn and had not been used or seen since. 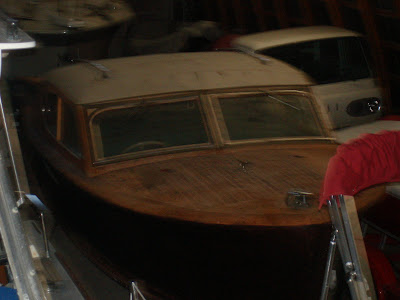 This owner had decided to do some restoration on the boat and removed the engine. He stripped the hardware and exterior stain, but left the interior as is. Little work was actually completed. The evidence of his inexperience in such an undertaking is clear – sanding marks in many places on the original hullside planks. Incorrect, ugly stain on the sides – a different color for each! Despite his inexperience, the owner cared for the boat – she was never neglected. He squirted oil into the cylinders of the Scripps every year and he secured the boat against rodents and the weather. 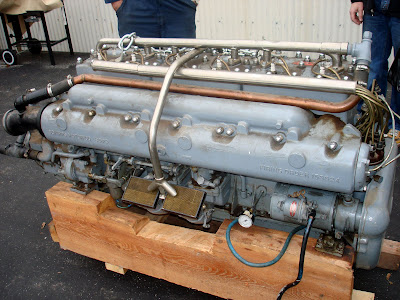 Time passed, the owner aged and circumstance intervened. The boat was never done. Sadly, he passed away in 2008 without seeing his dream of relaunching the boat fulfilled.The vendor from whom I purchased the boat had known of it since at least 1980. It was not for sale, but he kept it in the back of his mind and mentioned it to the prior owner and his family periodically. So, the family knew who to call when the time came to clear out some things after this owner’s passing. A deal was struck and the boat was retrieved. It had not been out of the barn for 35 years when it showed up at the Big Sky show this past August. It was not widely adv
ertised for sale, and although I was very vaguely aware of it, I had no previous idea that it was for sale at all when I arrived that day.A quick inspection in the dim light of the shed was enough to show me it was something truly special and worthy of serious attention. 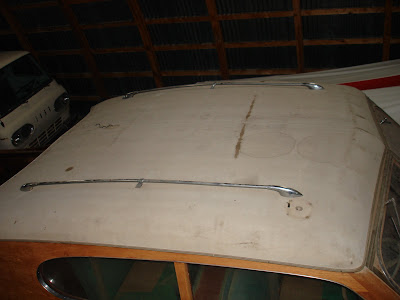 I quickly arranged for Dave Jerome of Portland, already fully engaged in the major restoration of our ’46 Gar Wood Sedan, to drive up and professionally inspect it for me. There would be no more sloppy surveys in my life. It surveyed as I thought it would. I immediately called the vendor and a deal was struck over the phone. My wife and I returned the following weekend to complete the purchase, and we were both even more thrilled with what we had. In many ways it was a virtual time capsule. 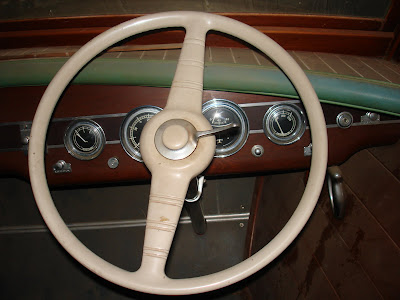 Yes, it is solid and rot free and original, but it does need considerable work – not just a varnish job. This is not a pristine vessel in as new condition – it would take some time and some money to put right. Of course these things always cost money to restore, especially when one is as bereft of skill at wood work as I am. Yet, Karen and I saw through the ugly stain and messy hull planks, and what we saw were the bones of a superbly preserved and totally sound, rare and uniquely powered Sportsman. 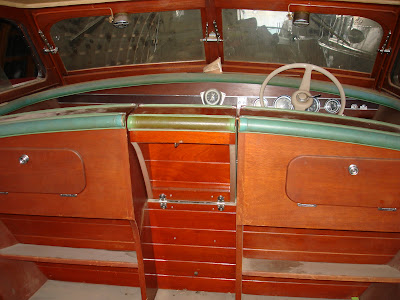 Just before leaving on the fateful trip where I encountered this boat, the thoughtful father of a friend, to whom Karen had given a ride in our 1940 19’ CC Barrel Back last summer, presented us with a memento – a photograph of our boat framed in 100+ year old wood salvaged from a barn on his farm. I remarked upon how much I loved the gentle age and mild distress of this reclaimed barn wood. 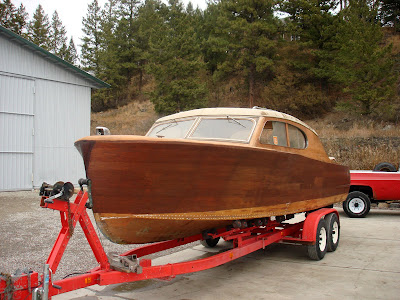 After buying this great Sportsman survivor, I started thinking about names. The previous name or names of the boat were not known. I recalled that many people like to call their wooden boats something with “wood” or “woody” in the name. Suddenly it hit me – how about “Barn Wood”? She had spent 35 years of her existence locked away in a barn, and as much of the gently distressed, beautiful but imperfect original mahogany as possible was going to be retained. I thought it a most appropriate name, for many reasons, and from now on, this is what she will be known as. To Be continued tomorrow.