I had the pleasure of meeting the Franchini Family in July at the 2009 Maritime Heritage Festival in Portland, Oregon organized by the Columbia-Willamette Chapter of the ACBS.
Since then we have stayed in touch sharing boating stories, information and contacts, and we have followed young Cole Franchini’s successful cart racing season this year throughout the Pacific Northwest.

Brian Franchini (Cole’s father and Steve & Diane’s son) has a great barn find story that we thought would be fun to share with the WoodyBoater viewer’s. Here’s the story as described by Brian ….. 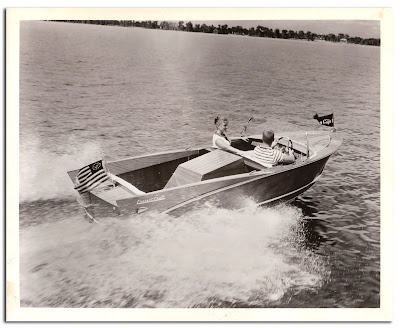 We all talk about how the restorable numbers of wooden boats are starting to dwindle. The barn find legends and abandoned boat house myths are fun to dream about, but are they really just that, myths and legends? While it is true there were a finite number of wooden boats produced, and a large majority have been found and restored, there are still enough left in hiding to make every enthusiasts’ heart jump when they hear the words “Boat” and “Barn” uttered in the same sentence.Such was the case on a warm summer evening in 2007 when my son, Cole and I were launching my Tollycraft for a lap or two around Lake Tapps (South East of Seattle). We live across the street from the Lake and use a good friend’s private launch that is just a few houses down from ours. Greg is a bachelor living the lakefront dream and regularly has a deck full of guests during the summer. As I backed my boat into the water, one of his guests leaned on the deck rail watching us intently. I just assumed he was marveling at my flawless launching skills (on the third attempt) or the fact that my (then) 8 year old son can handle dock lines like a pro. Instead he yelled to me, “I’ve got an old wood boat in my barn you might be interested in.” Might be interested?! He must have not have realized he used both of the “B” words in the same sentence. Without trying to seem too eager, we spoke for a few minutes and exchanged phone numbers for the following day. He did know that it was a Correct Craft and it was a plywood boat, but other than that, it was just an old wood boat in his barn.

I spent most of that evening and early hours of the next day on the computer trying to make myself knowledgeable about Correct Craft boats. The company was founded in 1925 by Walt C. Meloon and originally called the Florida Variety Boat Company. In 1936 the name was officially changed to Correct Craft. They built boats that ranged from 14′ runabouts to 55′ cruisers. Great! That really narrowed down my focus. Needless to say, there was not much sleep that night and I fought off the urge to call the owner at 6:30 AM. “Might be just a little too early, I will let him sleep until at least 6:45.”

I made arrangements to be at his house around 10:00 that morning. Cole and I arrived at his farm, armed with a camera and all my new found Correct Craft knowledge. From the driveway, we could not even see the barn, which just made the anticipation even more unbearable. It really is difficult to carry on a casual conversation with someone when you really just want to push them out of the way and run for the barn! He had warned me that it was a project boat so I was not expecting too much when we finally walked around the house and into the field. What stopped me in my tracks though were the lines on this little chunk of wood. I got started in this hobby by rebuilding a vintage fiberglass finned boat and have a special place in my heart for the rocket inspired finned designs of the late 1950’s. So to see this tiny wooden boat complete with wooden fins was more than I could take. Running up and hugging a boat is not the preferred bargaining method, so in my best John Wayne type “Slow Drawl” I asked, “What do you think you want for it?” I almost peed when he replied that the barn space was more valuable to him than the boat and I could have it if I would try and rebuild it someday. 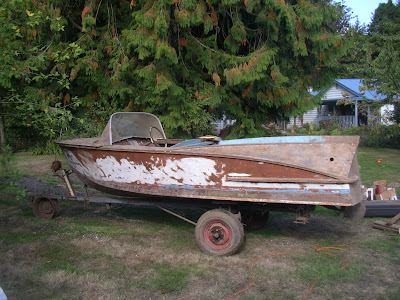 An hour and a half later I was back with a flat bed trailer and loaded up the boat and all of the miscellaneous parts. I marveled at the boxes of parts as I loaded them. Each part was tagged and a small note as to where it had been on the boat. At the bottom of one of the boxes was a file folder stuffed full of original Correct Craft factory photos and manuals. As we were freeing up his barn space, he told me that his Dad had bought the boat from the original owner in the early 70’s. On his first trip with the new boat, he had hit a submerged log in the Columbia River and tore off the raw water intake. The boat sunk at the shore before they could get the trailer back under it. He brought the whole boat, complete with the raw water intake that was still hanging on the bottom, back and put it in a barn where it lived for the next 30 years. 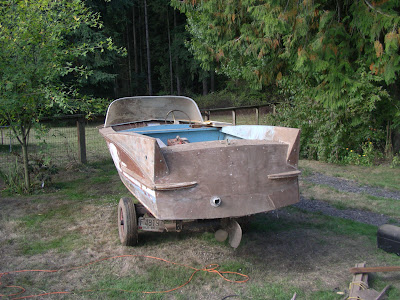 A rebuild was started in about 1995, but only made it to the hardware removal stage. With a little research, I found that the boat is a Correct Craft Atom Skier Deluxe. The Deluxe version had fins, the standard version had none. The boat is complete, including a 70HP Universal Unimite 4 cylinder flathead engine and all of the hardware. I am currently working on the research to ensure the finished boat represents the original as closely as possible. 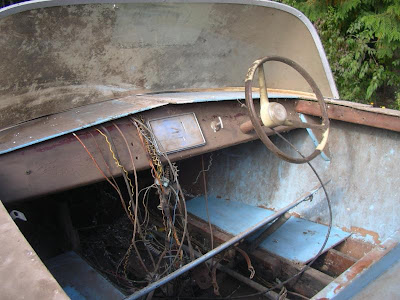 As most boat stories go, this one does not stop here. While searching the dreaded eBay site one night, another Correct Craft Atom Skier popped up. At only $1,000.00 with 10 minutes left, what could be the harm in bidding? The next weekend, my Dad and I made a whirlwind trip from Seattle to Los Angeles and back to retrieve a second little Atom. This one, a 1960 version with a Greymarine V8-188, has a story all to it’s own, but suffice it to say a 327 stuffed into a 14 foot boat was just too much to pass up! As soon as the funds make themselves available, this one is going to Rob Dapron’s shop so he can work his magic. 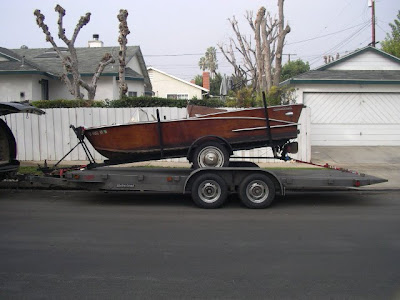 My imagination still gets the best of me when I pass a barn leaning to the side from years of resisting gravity. The old boat house that season after season is never open still raises my curiosity. I even find myself getting excited about cyber hunting boats on the computer into the late hours of the night. But none of these seem to compare to just two simple words, “Boat” and “Barn”, spoken together to really get our attention.
Brian Franchini

Well folks, it may not be a Chris-Craft Hemi Cobra or a 25′ Sedan with a Scripps, but Brian saved it from the burn pile and will give it the respect and attention that it deserves for all to enjoy another day. Thanks Brian for sharing your story with us! 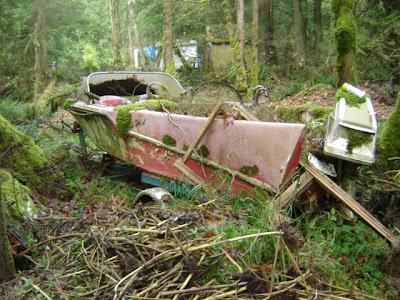 One Response to “A Franchini Family Barn Find Story – A Classic Wooden Boat with Fins?”