The Pacific Northwest has a rich marine history and the Sande “Ace” Runabout shares a small piece of that history. Built on the shore of Hood Canal near Belfair, Washington (east of Seattle on the Olympic Peninsula) the Sande Ace was produced by Sande Boat Works from 1957 to 1962.

In 1941 the Sande family purchased a 50-foot waterfront lot for 1,000.00 on Hood Canal, and built a house. The property across the road would later become the home of Sande Boat Works. 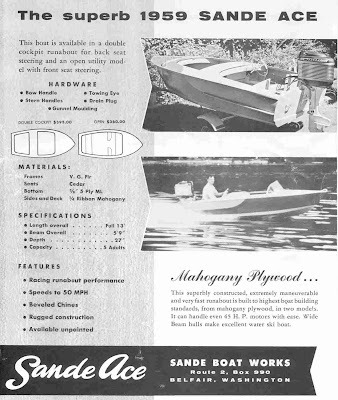 Orrin R. Sande was in the Army Corp of Engineers from 1943 to 1946 and helped build bridges and runways at Guadalcanal and Fiji in the south Pacific. While in the Army, he dreamed about one day starting a business building wooden boats. After the war Sande Boat Works became a reality for Orrin, and from 1947 to 1960 they built nearly 1,000 wooden boats. They built many cedar strip boats ranging in size from 12 to 16 feet, and from 1957 to 1959 they built the famous 13 foot mahogany plywood Sande “Ace” runabouts.

In a tribute to his 82 year old father Orrin after his unexpected death in 2007, his son Earl Sande said, “Back then you were a pretty cool guy if you were seen water skiing behind a Sande Ace with a 45 HP Mercury outboard!” By 1960, fiberglass boats were all the rage and they opened a store in Belfair, Washington and sold Pacific Mariner & Glaspar fiberglass boats, and Mercury outboards. They sold Sande Boat Works in 1975 when a Glass-ply boat with a Mercruiser stern drive was selling like never before, and Orrin Sande retired at the age of 51.

A dedicated group of Sande Ace enthusiast’s throughout the Pacific Northwest and other areas of the country collect and restore these rare boats, and have developed a great web site with lots of information on the marque. You can see it at http://www.sandeace.com/ 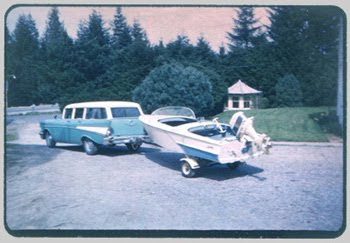 In 1959 Ed Waali’s parents bought their Sande Ace and towed it around the country with their ’57 Chev station wagon. (I guess today we call them SUV’s or Crossovers today)

Fast forward 50 years, and here’s Team Waali with three of four generations who have taken the helm of the Sande Ace…. More Woody Boaters with smiles on their faces. 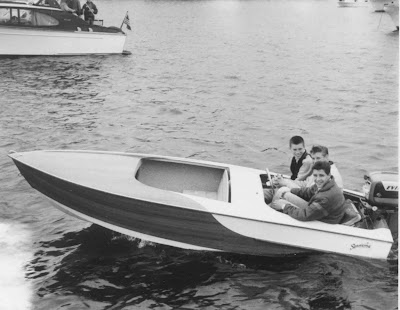 Ned Hamlin was first introduced to the Sande Ace when he was 12 years old, and finally talked his Dad into ordering a new one in 1961. 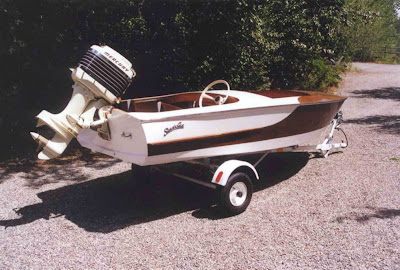 Here’s the 13 foot Sande Ace that Ned has restored, see the whole story on the web site. 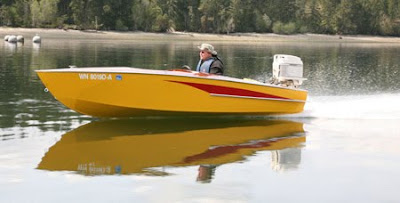 Tom and Susanne Regan’s bright yellow Ace “Scooter” out for a ride. 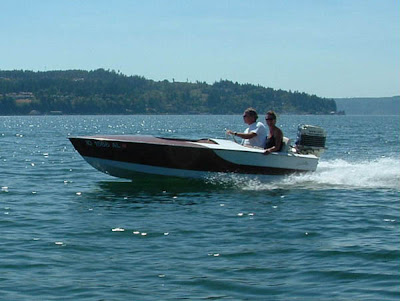 Every year a group of Sande Ace enthusiast’s get together to race around the lake and celebrate the history and tradition of the marque, just like back in the old days when many of these owner’s were young. After all, that’s what the antique and classic boating hobby is all about.

They award special trophies and just have a good time.

Bob Park’s recently restored Ace.
A few weeks ago I met a fellow named Bruce. Bruce loves these old boats, grew up near Hood Canal and was attracted to them at a very young age. He also grew up with the Sande Family and knew them well. Bruce told me that in the late 50’s and early 60’s only the wealthy and daredevil’s could afford to own and operate a Sande Ace with a Merc Mark 30 or 45. Bruce called the Sande Family a “One in a Million Family and when talking about them, one always gets a smile on one’s face.” He went on to say, “It was great having them as fri
end’s on the Hood Canal.”