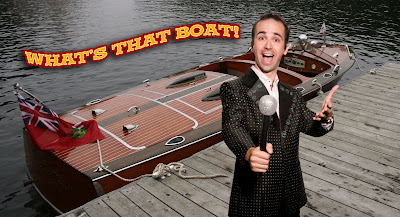 Hello ladies and gentlemen, we have a very special boat here, with only one problem… No one knows what it is! Is it a new modern boat, or an oldy but goody that has been restored into oblivion. What make is it? Here are some images. Please comment away. a fellow woody boater is about to trade for it and would love some help identifying it. UPDATE! BEST ANSWER SO FARE: ” I looked on the ABA site for the listing he mentioned and if you go a bit further down to listing #26301 that appears to be a boat even closer to the mark. Our guess is it was modified when restored with some artistic licence taken as to the deck area layout and some of the hardware – hull looks to be very similar. Andrew thinks this was likely the predecessor to the Greavette Sheerliner which is a much more attractive hull. He also mentioned that there are some styling clues that are similar to Jim Coopers 1938 18′ Greavette triple – especially the bridge deck area. Now that I see these pictures I’m guessing the windshield was an off the shelf one used by both Shepherd and Greavette and probably others.”
And Another: Stern pole is not Shepherd though – looks like a more modern type with a curved s/s shaft with a blade effect on it – kind of looks like a Barnes piece – similar design as on Billy Bee as an example. The bits of hardware are mostly Greavette style (same as on our Streamliner) check Real Runabouts Vol 3 page 152. The dash gauge panel is the same as the original one in our Streamliner and we believe is a pre-war SW panel so nothing special there. The step pads are similar to Greavette other than the rubber. The big wood vents are simlar to both Greavette and Shepherd but not as nice. Windshield looks like a Shepherd late 40’s early 50’s – same as came on the 1948 Shepherd 22′ Special Runabout we have waiting to be restored. The search light was another Shepherd thing.

Also if you look at page 90 in R/R vol 1 there is a few shots of some mid 50’s Greavettes that have similar style and then on page 87 there is a shot of the layout of a 1941 33′ Greavette which looks very similar but obviously not exactly the same. I wondered about the trim around the rear cockpit – especially the gaps but Andrew informed me that that is because the hatch tilts towards the rear and the two pieces of trim would then butt up against each other. He is eventually going to do the same trim on the Streamliner’s rear hatch – so another similarity to the Greavette.

Andrew thinks there is a slight chance it could also be a Hacker or Van Patten design (both worked with Greavette) built in the Muskokas or even a modification by a local builder of another builders hull which was often done in the Muskokas usually by one off shops. Could be it was built by an ex-employee of Greavette – but when is the question. 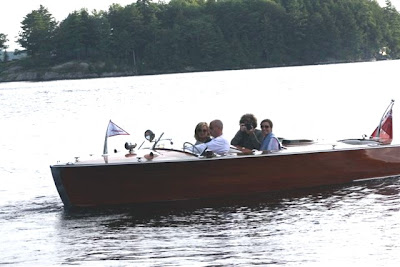 Was it a camera boat for the poparatzi? 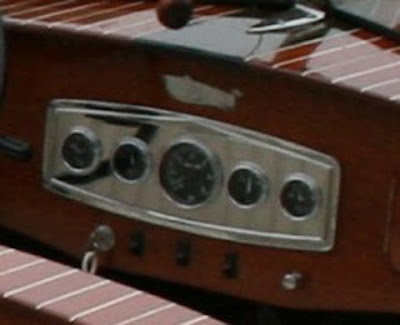 There appears to be a logo of something above the gauges 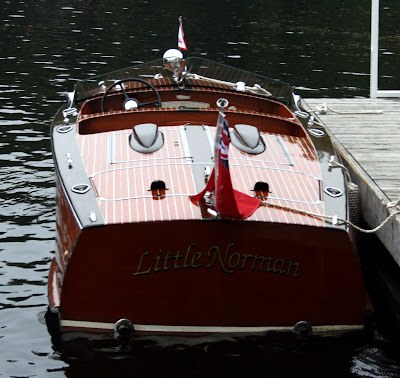 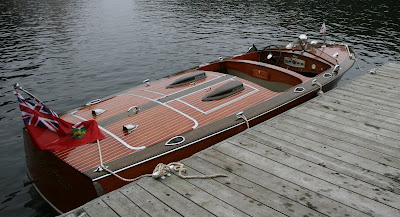 No lens in the flag pole… Is that a hint?