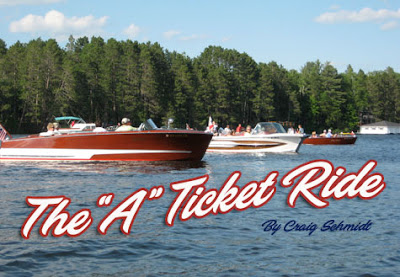 In June of last year I took my 1938 Chris-Craft 17″ Deluxe Runabout to the Eagle River, WI Antique Boat Show. The venue, the Wild Eagle Lodge, is on a chain of 28 beautiful lakes and has excellent accommodations for exhibitors and their boats. 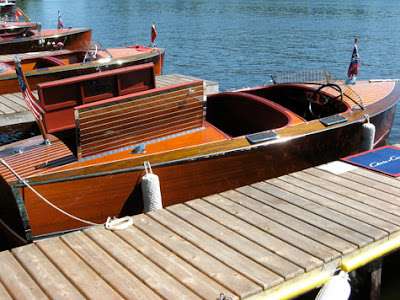 Following the public viewing on Saturday, captains were invited to participate in a high speed photo shoot and cruise. I was somewhat reluctant to join in the high speed run-by, but welcomed the opportunity to cruise the river and lakes with folks who had local knowledge of the waters. I should have been more reluctant.

About a dozen boats lined up for the high speed run. I and my three guests found ourselves to the starboard of and somewhat astern of a big Shepherd. At the signal from the photo boat, everyone charged ahead and came up on plane. About twenty seconds into the run, I started to cross the wake of the Shepherd to my port side, but my runabout broached and spun to starboard, rolling up on its port side to what seemed to be close to 90 degrees. Everyone aboard felt the boat was going to completely roll and sink. I killed the engine when the propeller came out of the water and the engine started to redline. The boat seemed to hang on is side for a second, and then flopped back on its bottom.

As we broached, the passenger sitting in the rear starboard seat was ejected, flying completely over the head of the passenger seated next to her. We threw her a flotation device while I quickly checked the
boat: She had shipped about five inches of water but was not leaking. I was able to start the engine and the boat could respond to the helm. By this time, another boat had arrived and was holding onto the ejected passenger who was still in the lake. A nearby pontoon boat with a boarding ladder was summoned and our swimmer was safely boarded and given a blanket for the return to the lodge. After a hot shower and change of clothes, she was fine.

As a result of the broach, two cameras were soaked, a hat, a sandal, a pair of glasses and some cosmetics were lost. I pumped out the boat and was surprised to find that there was absolutely no damage. 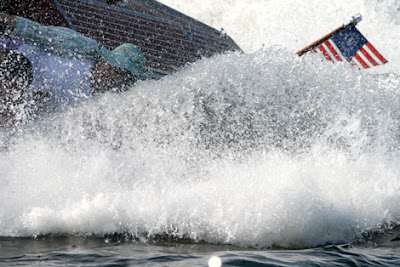 I didn’t realize it at the time, but the lady on the photo boat, whose name I do not know, was able to snap an incredible picture of the broach! The photo shows the back half of the boat as she is starting to roll on to her port side. The passenger with the blue hat, who was sitting on the starboard side, is about to be ejected over the head of another passenger who is hidden in the spray, but who managed to hang on as the port side was partially submerged.

I was later sent a copy of this photo, which I call the “A” Ticket Ride. It is prominently displayed on a wall in the lake cottage. I’ve already sent in my check and registration form for this June’s boat show a Eagle River.