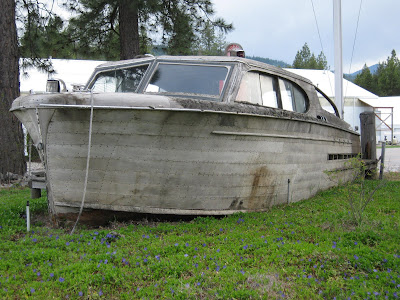 As most Woody Boater’s will tell you, driving through the rural countryside usually involves a combination of paying attention to the road and intermittent glimpses across the landscape hoping to spot an old wooden boat in a barn or under a tree. We all know the chances of actually spotting one is highly unlikely, but we never give up hope. 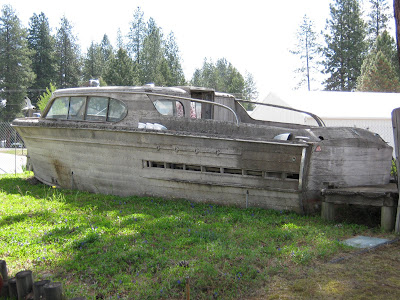 So when you arrive at the Resort Boat Shop in Post Falls, Idaho and the first thing you see is an old wooden boat under a tree, you know you are in good company. Eric O’Brien, the Service Manager at the Resort Boat Shop, said that the old 1948 Chris-Craft Super Deluxe Enclosed has been there as long as he can remember and is now just part of the landscape. 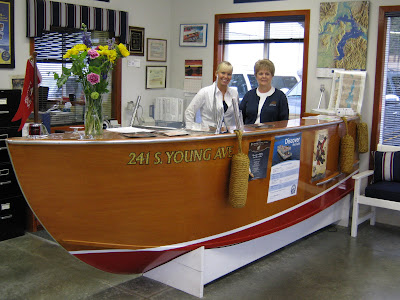 On Saturday, we attended the 5th Annual Resort Boat Shop Show & Shine in conjunction with the Inland Empire ACBS Chapter General Meeting. As expected, to celebrate the beginning of spring and the 2010 boating season in North Idaho, attendance was great for this year’s event. Folks from as far away as Oregon, Western Washington State, Montana and Canada were on hand for the party.

This was my first opportunity to visit the Resort Boat Shop, and I was very impressed by the size of the facility and services they provide. With a staff of 17, no job is too big or too small. Eric O’Brien commented that this winter they also provided covered storage for 542 boats, including approximately 70 wooden antique & classic boats of various size, age and condition. 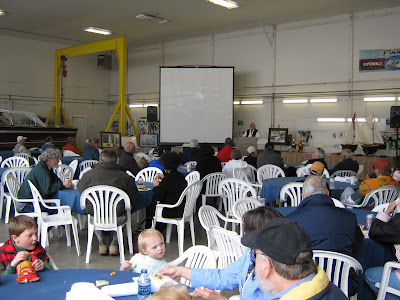 The day started with the ACBS Chapter General Meeting, headed up by Chapter President Larry O’Leary. Then Inland Empire Past President BK Powell, who is now a Director with the ACBS, took the podium to bring everyone up to speed with what was happening on a national level. BK Powell encouraged all chapter members to bring any comments and inquiries that they may have to his attention, so they could be voiced at ACBS Headquarters. 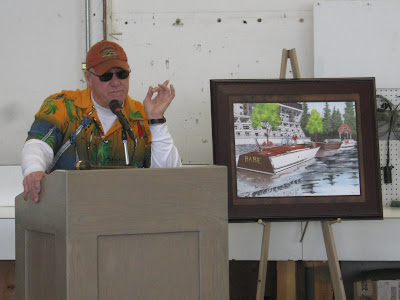 The artwork for the 2010 Sandpoint Wooden Boat Festival was unveiled, and when the chapter business wrapped up, lunch was served, the live music began and we spent the spent the rest of the day doing wooden boat stuff – It was lots of fun and the spring weather also cooperated. 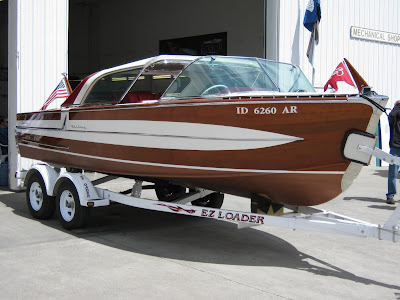 This 1957 Century Coronado was immaculate and is now ready for another year on the water. 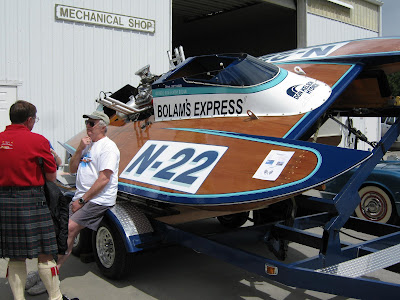 N-22 Bolam’s Express Vintage Hydroplane is owned by Bob & Kathy Bolam from Hagg Lake, Oregon. The boat was originally built in 1981-82 and held a One Mile Record in 1982 of 85.751 MPH on Lake Spanaway, Washington. N-22 received a full restoration in 2007. If you ever have an opportunity to visit with one of these original hydroplane racers, make the time, they have some very interesting stories from those days! 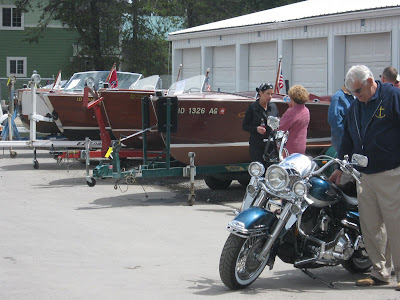 Tip of the hat from Century boat aficionado John Tyler who was in attendance this year. 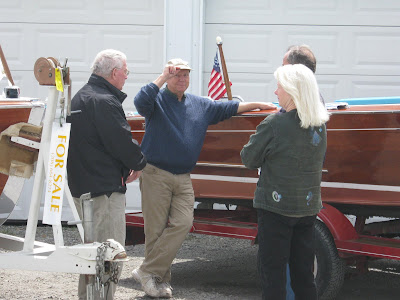 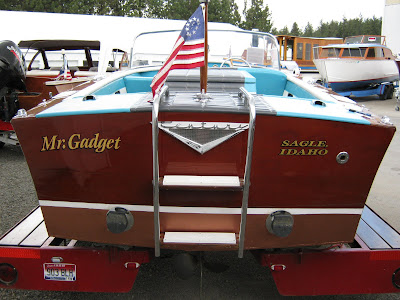 Check out those original color coordinated gauges in this 1964 Century Resorter 16. 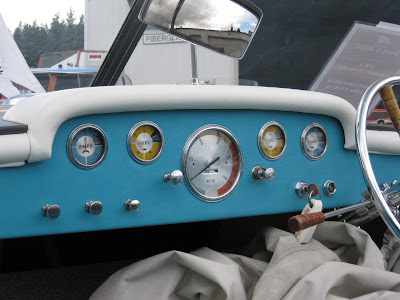 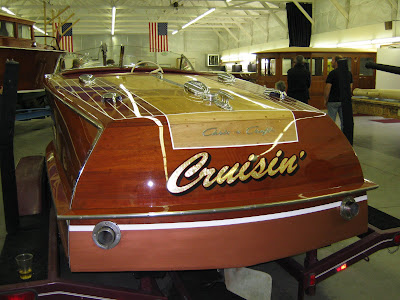 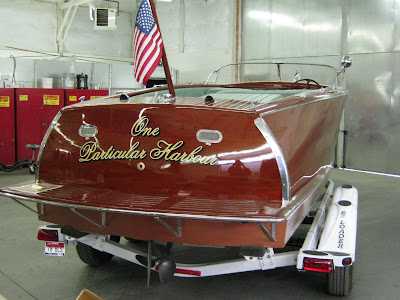 Another recently completed project in the shop is Jim Busby’s 1947 Chris-Craft Red & White. 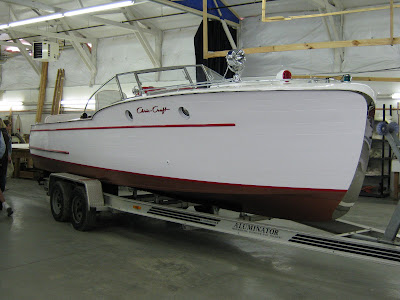 It was fun to go from building to building and to discover what was around the corner. “Cheyenne” is a 1929 Gar Wood 28′ Triple Cockpit Runabout. It was so long that I had a hard time getting a good photo of it in the shop – I guess it’s time for another new camera or only take photos of short boats…. or a photography class. 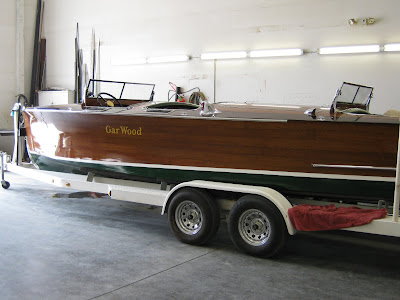 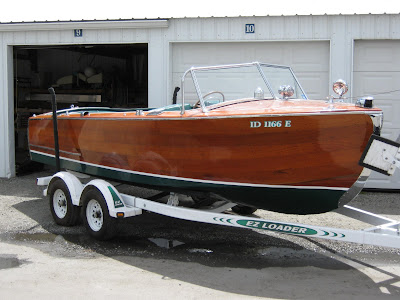 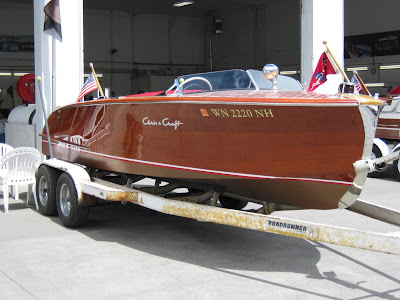 Thanks to the Eric O’Brien and everyone at the Resort Boat Shop for the great day! 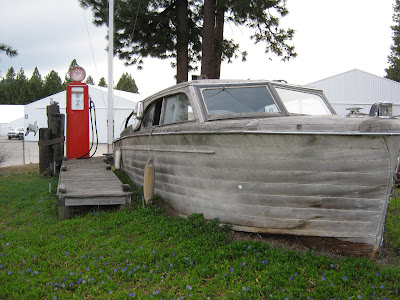