As part of Misery week here at Woody Boater we used a wonderful image of a boat burning provided to us by Mr Misery himself. Captain Grumpy… I wonder how he got that name? Yes not only did we get to enjoy Randy Rush’s hell yesterday, but we get to now live in his shoes one more time! Here is the story of the burning boat in Randy’s own words. 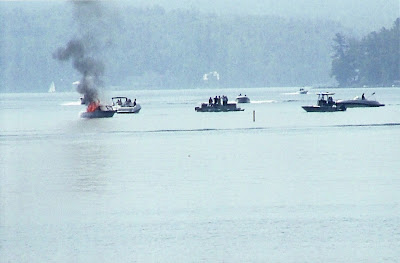 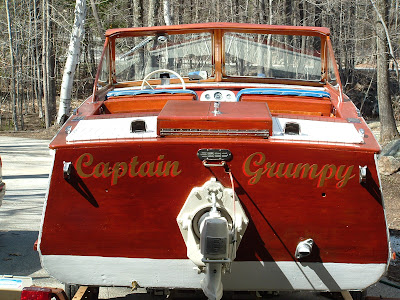 My wife’s 50th birthday party was scheduled for June 6th . So while I was waiting for the guests I decided to drive over to my boat and change the fuel filter. Pulled the filter and then looked at the fuel pump filter bowl, filled with crud. So I decided to change the pump and new hoses. Changed out everything , started it up at the dock, ran it for 1/2 hour watching for leaks with a flash light. So I went for a quick ride, idled it out and hit the throttle, I heard a pop, backed the throttle , still idling perfectly, figured it was a piece of crap from the pump. Hit the throttle again BIG POP! I stopped and saw smoke coming out of the boat, Got my fire extinguisher out, opened the hatch, and sprayed the hell out of it, almost out, but it kept coming back, so I’m thinking OK I can save it and kept hitting it. I burned thru the bottle and now the flames were coming out the sides and vents, the back seat was burning. Now this is 8:30 in the morning , no one on the lake, I look and see some guys fishing off a pontoon boat and start screaming at them, they drive over and throw me there extinguisher, 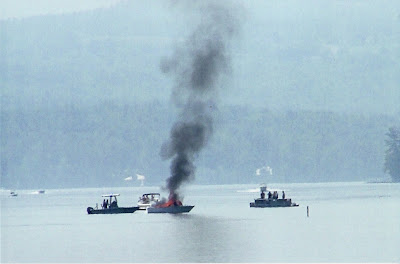 By now the entire back of the boat has 3′ flames, I go there extinguisher and see the boat drifting to shore-someones house, I try to throw the anchor out, but the flames are too intense, the guys on the pontoon are screaming at me to jump, so i did in the 54 degree water and swam for my life to their boat. I sat on there boat and watched it burn for a half hour before the marine patrol picked me up.Funny thing about watching it burn it was like watching TV except on TV the boat blows up, mahogany just smolders. The chose to let it burn down to the water line. Then I called my wife to inform her I had a slight problem and to come get me. She drives our plastic boat over but cant figure out where (captain grumpy) our boat is. Then she sees the boat burned and sunk. The Marine patrol guy asks me what marine salvage company I want to clean it up. I responded , like I have a Marine Salvage company on speed dial!. So it cost the insurance company $7k for a barge with a crane to pull it out of the water and 3 divers to clean it up. The guys called me up and asked me if I wanted the transom as they thought the boat name was funny. 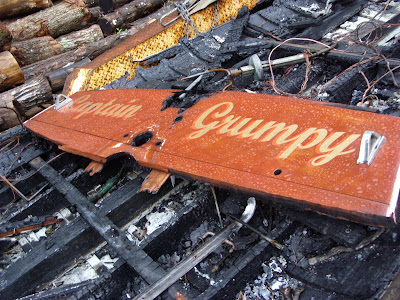 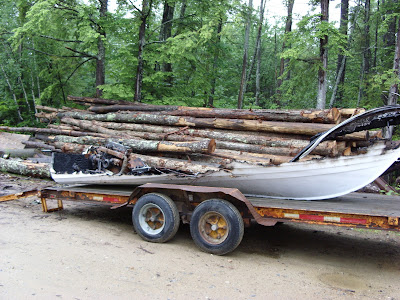 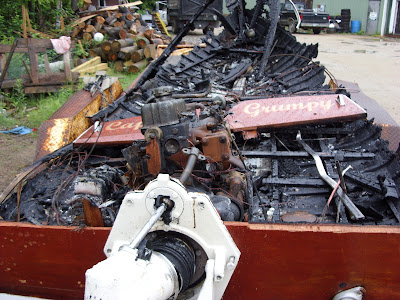 So the transom is mounted on the wall of my garage, my wife wasn’t even pissed about her party her friends love telling the story, and I used a piece of the transom in the boat that just sunk. What do you think about that? This is all I have at work, I can send better pictures from home. Also there is a small video on You-tube- boat burning on Lake Winnipesaukee that some guy took from the shore. Oh yeah that’s the same dock that I rented from the old lady..

8 Responses to “mmmm Is That Mahogany I Smell Cooking?”