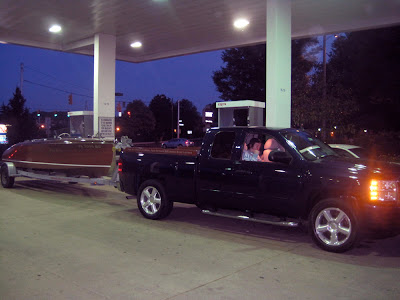 What a weekend. It all started at 5Am on Friday morning. 8 1/2 hrs to The Antique Boat Center in Ohio, 2 hrs drooling and saying good bye and then 8 1/2 hrs back. 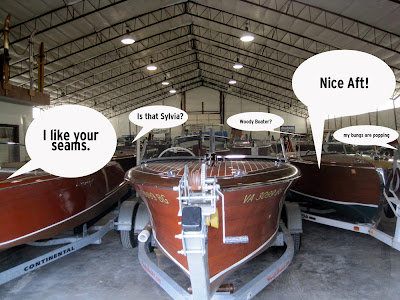 Not so bad except that after Columbus you might as well be in the deep  woods of inbred world. Between West Virginia and western Maryland I think I counted on complete set of teeth, and saw the human body in a different way. Dear lord, thank god for elastic waist lines.. And Mountain Dew.. What is that all about. At every stop someone was buying Mountain Dew.. I wonder if the two are linked together…Not ONE! piece of fruit, no apple, orange or Banana.. NOT ONE! That was the toughest part of the trip. It wasn’t the driving, or the scenery. That part was perfect, in-fact some of the nicest driving in the country.. maybe it’s because I wasn’t hauling $100,000 worth of mahogany anymore. A funny thing happens while you are doing that. You feel every singe bump in the road. The good news is that Sylvia looked magnificent when she got there.

Looking forward. This weekend is the big Chesapeake show in St Michaels. This is the premiere show in the Mid Atlantic. It’s a magnificent setting and attracts some of the nicest boats on the east coast.  We will be there on Saturday, trying to report live-ish. Aslo we will be reporting Live-ish this weekend from Lkae Tahoe at the big show there. Aslo the premiers show on the west coast.. and probably in the country.  Then the next weekend is Algonac Michigan for the big Statue deal and a great show put on by the Michigan Chapter. Also the Lake Hopatcong Show in new Jersey. I know the folks in New Jersey and there boats. I am frustrated beyond belief tht i can not be there. That is my pick for the most fun show of the month. But the statue and the entire Smith family is a once in a lifetime event.. The Hopatcong folks will always be fun and have killer boats…Ahhhhhhh……Two weekends of fresh varnish and chrome. So I have two weekends already filled with a distraction from Sylvia. Then its July and we are doing Clayton and will be drooling on some nice boats at the auction… Hopefully by then Miss Betsy will be in the water and all will be well in Woodyboaterville. I hope… 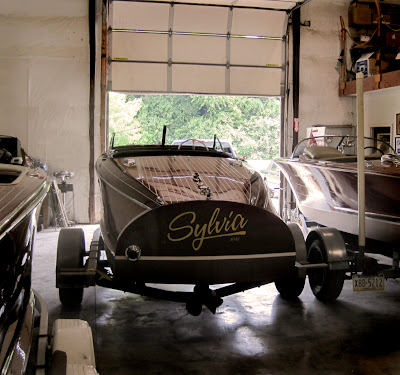 2 Responses to “Sylvia Is At Her New Home, And We Are Looking Forward!”