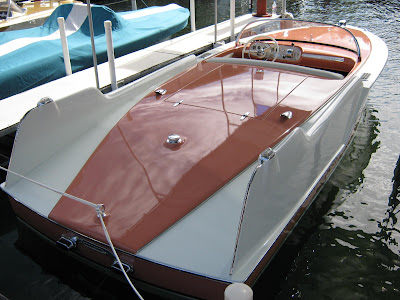 Since we originally reported on the 2010 Lake Tahoe Concours, WoodyBoater has received a number of requests asking us for more information about the Marque Class at this years big show. The Marque Class for 2010 was Classic Fiberglass up to 1964. The Perpetual Trophy for Marque Class (Full Fiberglass) Best of Show was awarded to this immaculate 1955 20′ Dan Arena Co. Barracuda Sportster. 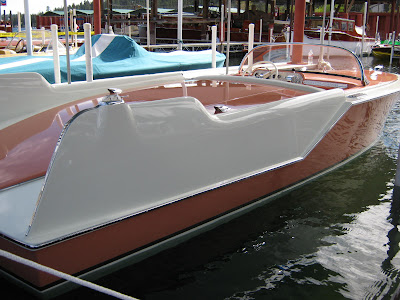 This 20′ Barracuda Sportster is powered by a 175 hp Dearborn Interceptor V-8 and made it’s debut in February 1955 at the Chicago Boat Show. 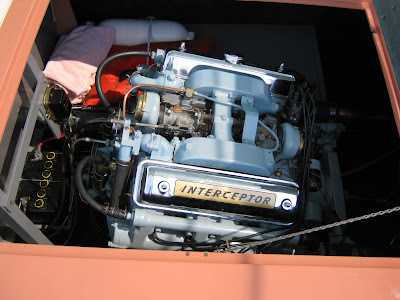 The Tahoe Yacht Club decided it was time to pay tribute to the early fiberglass boats and materials that eventually shaped the future of todays modern boat designs.
David Olson, Tahoe Yacht Club Foundation President, wrote in the 2010 Lake Tahoe Concours program,
“As we reflect on the treasures from the past, we very quickly see how the design, and materials used from the boats of the 1920’s through the mid-1960’s evolved and changed. Previously we have honored the early elegant wooden launches, the grand runabouts, the speedboats all showing their beautiful finely varnished wooden structures and exteriors. Today we honor and pay tribute to the use of a “man-made” material, developed during World War II, that totally revolutionized boat construction and exterior finishes. Just think that some of these examples we have gathered here today are 60 years old. From a historical perspective these early fiberglass boats were constructed in the same time frame or right after last years Marque class of “Blond Deck Runabouts.” 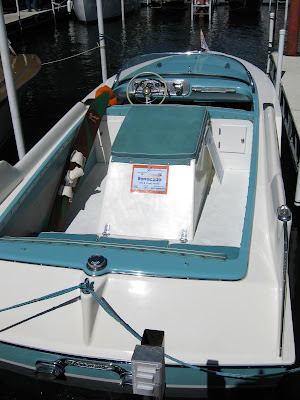 Here’s the second of three classic Dan Arena Co. boats that Dan & Casey Arena brought to the show this year. This one is a 1956 20′ Barracuda Utility powered by a 215 hp Dearborn Interceptor V-8, which by the way is the only all original, unrestored boat in their collection. 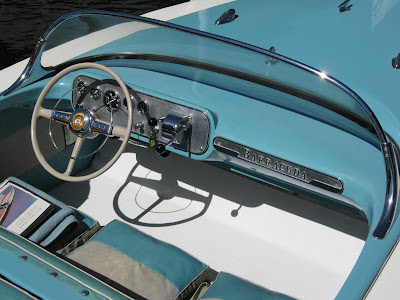 We have to also give thanks to Danny Pavel (Show Manager) and Sue Cawdrey (Public Relations and Marketing) for all their assistance prior to and during the event this year. 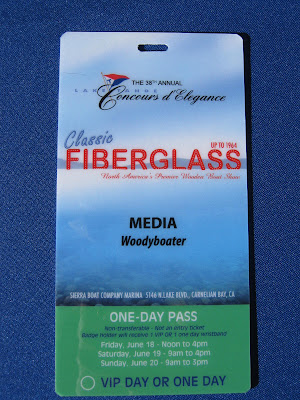 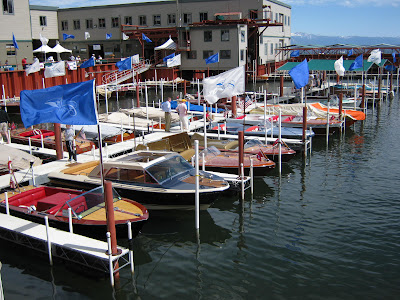 Two Chris-Craft Cobra’s were entered in the Transitional Fiberglass Class “Fluff” a 1955 21′ and “Serpent” a 1955 18′ Cobra which received the top award for Marque Class Best of Show and Best Chris-Craft of Show. 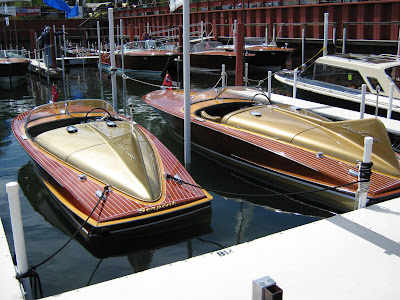 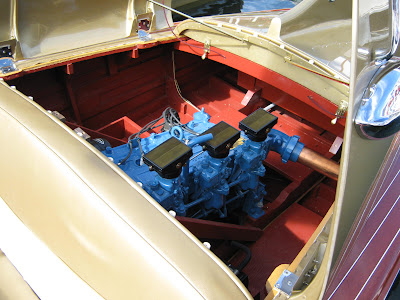 “Twin Finn” (below) a 1959 21′ Chris-Craft Continental received the Second Place Award in the Transitional Fiberglass Class. 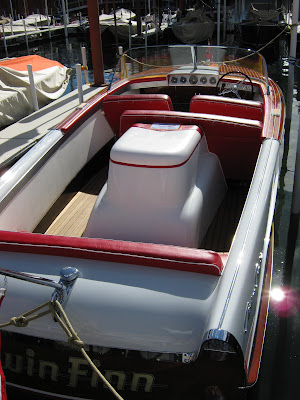 A total of 8 boats were registered in the Full Fiberglass Class, of which 5 were officially judged. This included the two Dan Craft Barracuda’s (shown earlier), and “Little Fury II” a 1956 Belmont Boats Runabout powered by a 270 hp Chevrolet Corvette Tri-Carb V-8. 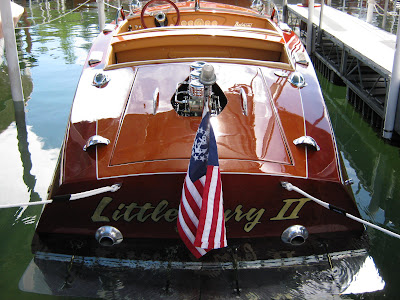 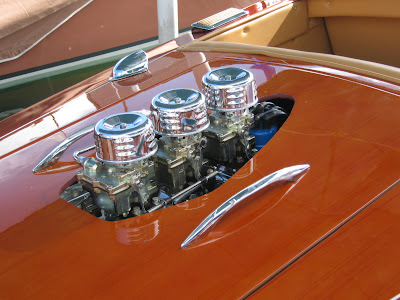 Also judged in the Full Fiberglass Class was “Mint Julep” a very nice 1959 16′ Wizard Bolero (shown below) powered by a period correct Bimini Blue 70 hp 6-cylinder Mercury Outboard. Those Tall 6 Merc’s, commonly referred to as “Dock Busters” (because they have no running neutral) are very cool and always a crowd favorite. This boat is a past award winner at Big Bear and Lake Arrowhead ACBS events in California. 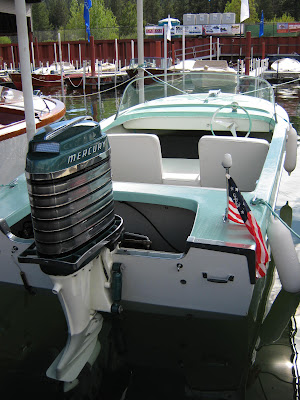 Other boats in the Full Fiberglass Class included a 1949 16’6″ Triangle Boat Co Utility named “Penny Lee” and a 1964 18′ Arena Craft 18′ Bonito Utility named “Classical Glass.” Multiple award winner “The Quiver” a 1959 19′ Chris-Craft Silver Arrow was on hand but not judged. 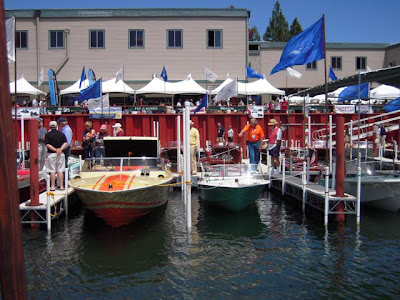 “Casper” an all original, unrestored Chris-Craft Lake ‘n Sea 15’ has taken on a life of it’s own in the last few months. After being launched in Lake Dora for the first time in over 38 years, for the 2010 Sunnyland ACBS show, it became somewhat of an experiment.
During the Sunnyland show in March, we decided that it would be fun to enter the boat in the 2010 Lake Tahoe Concours with the other Marque class boats. In the short time between the Sunnyland show in late March and the Lake Tahoe Concours in June we simply cleaned up the boat, carefully polished the original gel coat & paint, polished the original rub rail & hardware, machine washed the 1957 Bimini canvas top and performed some basic maintenance. 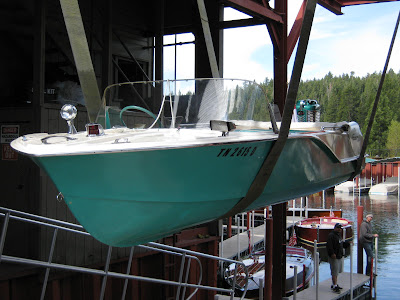 We discovered an original Chris-Craft dealer accessory brochure at the Mariners’ Museum from 1957 which offered optional interior seat cushions. We used the original 1957 photograph to re-produce some new, period correct seat cushions for the boat just in time for the Concours.

So the experiment was, can you take an original fiberglass boat in good condition and bring it back to life for a reasonable amount of money? The answer is Yes – and I can say that “Casper” was very well received by the boat show organizer’s, participant’s and the spectator’s at the Lake Tahoe Concours. Further evidence that these entry level boats can provide an opportunity for folks to become involved in the antique and classic boat hobby both on a local and national level, without spending a fortune. 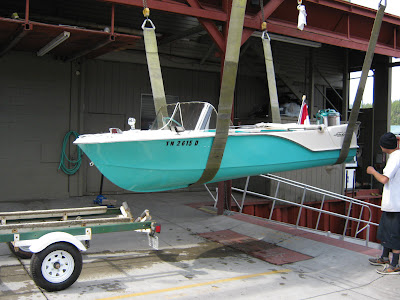 The fellow running the gantry at Sierra Boat Company treated each and every boat, regardless of type, size, age or value, like it was his very own. It was comforting to see. 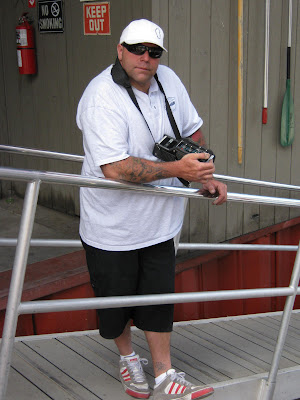 The last word – Young Andrew Triano won the People’s Choice Trophy for his Youth Entry “Hornet” a 2008 12′ Triano Marine Design Speedster. Andrew is a wonderful young man, he stayed with the boat the entire time during the show and always had a smile on his face. Here he is with a young spectator that he invited aboard to see his creation. 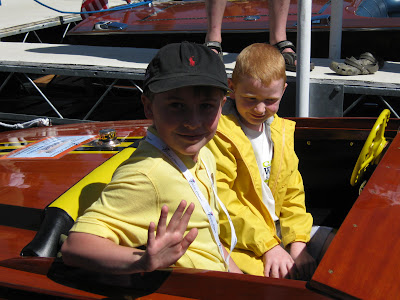