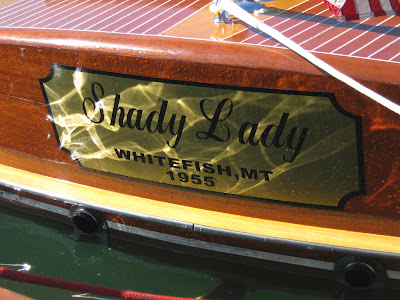 A Three Part Trilogy – A Cool Boat, with a Cool History, and a Very Cool Owner.

Part One – A Cool Boat
Last weekend while attending the Sandpoint ACBS Boat Show in Idaho, I was introduced to Tim & Deb Salt and “Shady Lady” their 1955 22′ Chris-Craft Continental. Not just another Continental, in fact there were only 102 – 22′ models shipped in 1955. But of those shipped, this particular hull was one of only 28 – 22′ Continental’s produced in 1955 with a 200hp Chrysler M45S V8 (Hemi). And, according to our friends at the Mariners’ Museum, only 3 of these Hemi powered models were originally shipped with what Chris-Craft referred to as a Sedan Hard Top c/w ventilating windshield and sliding windows. 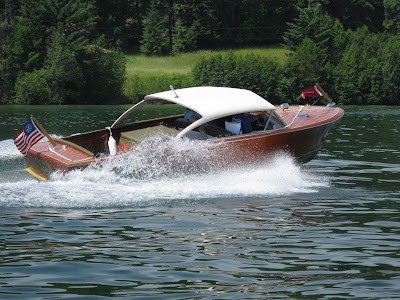 “Shady Lady” was built at the Chris-Craft plant in Cadillac, Michigan and shipped on June 14, 1955 to John G. Rapp Company, the Chris-Craft dealer in San Francisco, California. 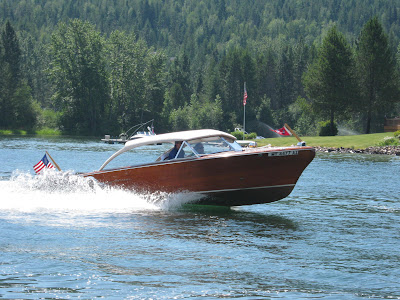 The first thing you notice when the boat is cruising on the water is that, in some ways it takes on the appearance of a big runabout, rather than a utility. Probably due to the optional hard top. She looks very elegant in the water, and sounded great with the old Hemi barking out an exhaust note from the transom. 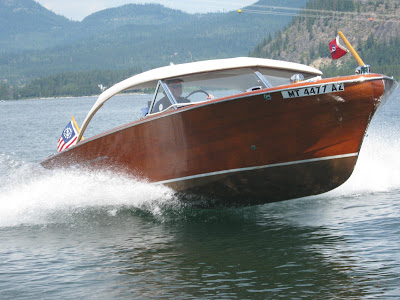 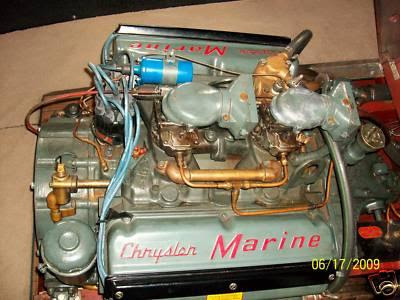 Part Two – A Cool History
In the book Chris-Craft Boats by Tony Mollica Jr. and Jack Savage, they say – By 1955, Chris-Craft customer’s had come to expect annual changes in the lineup, and the highly successful utility fleet was no exception. Two of its longest-surviving standard utility models, the traditional 18-foot and 22-foot Sportsman, would be discontinued. The 17-foot Sportsman would continue as the basic, entry level utility for the next four years. New for 1955 was the Continental series, the next generation in the (Chris-Craft) Holiday concept.
These early Continentals were a refined version of the original Holiday models and lent themselves to easier construction resulting in easier maintenance. The Continentals eliminated some of the more costly Holiday features such as teak flooring, blond sheer plank, full-rounded covering boards, varnished sealing panels, and the blond bow cap. These changes created a new design leader among utilities for the next several years, as the Continental’s popularity was exceptionally strong. 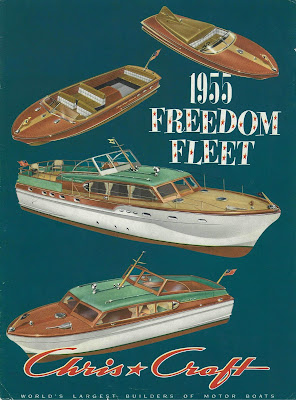 The original Chris-Craft brochures (above & below) provided by, and used with the permission of the Chris-Craft Antique Boat Club. 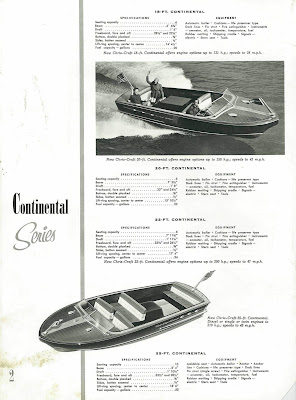 CHRIS-CRAFT BY THE NUMBERS-THE CONTINENTAL ERA

1955 was the biggest year ever for Chris-Craft in terms of new models. The CAPRI and the COBRA runabouts were new, a number of new cruisers were introduced, and an entirely new line of utilities were introduced ranging in size from 18′ through 25′.

Although available in lengths up to 26′, the CONTINENTALS were low, sleek, bullnosed beauties. Chris-Craft would be without a large open “utility” in the line until 1959 when the 24′ SPORTSMAN was introduced.

All CONTINENTALS and derivatives were phased out during 1961, to be replaced by an entirely new line of “sport boats” designed after Chris-Craft moved to Pompano Beach, Florida and sold out to NAFI.
22′ – 23′ CONTINENTAL / HOLIDAY

The 1955 22′ CONTINENTAL was an all new boat, similar in appearance to the 20′ CONTINENTAL, and intended to replace both the 22′ SPORTSMAN and CUSTOM SEDAN which were retired in 1954. An attractive hard top was offered as an option, similar in design to the open sided hard tops offered by Gar Wood in the late 1940s. The 22′ was stretched to a 23′ for 1956, and produced through 1958. The big “W” was available as an option.

102 CONTINENTALS were built in 1955, and 26 HOLIDAYS. As a 23′, 97 CONTINENTALS were built during 1956 and 28 HOLIDAYS. Finally, equipped with a new 2 piece curved windshield, 73 CONTINENTALS were built for 1957 – 1958. Altogether, 326 22′ – 23’s were built including hard tops, most equipped with “M” series engines.
“Shady Lady” (as she is now named) has a long, interesting history. Although the boat started life with her original owner in the San Francisco Bay area, the second owner’s of the boat were the Chesebrough Family. They kept the boat for the next 15 years and used her in the San Juaquin Delta area in Central California. During those days, their young son Peter (Chesebrough) learned to water ski behind the boat and formed an attachment to the boat. The boat was then sold and ended up being stored in a barn until the mid 1980’s until it was once again purchased, this time by Wilbur Miller who eventually restored the boat near Sacramento, CA.
Fast forward to around 1994 – Peter Chesebrough, the second owner’s son decided to find the old Chris-Craft Continental that he became so attached to when he was yo
ung. From a 40 year old photo, he magnified the image and recovered the boat’s registration number. After contacting the California DMV, he was given Wilbur Miller’s name as the current owner and contacted him. Peter met Wilbur in California, and two years later Peter bought the boat and shipped her to his home in to Big Rapids, Michigan.
Soon after, Russ Arrand of the Cadillac Boat Shop in Cadillac, Michigan was contracted to install a new bottom on the boat, resulting in a “Best Chris-Craft Award” at Boats on the Boardwalk in Traverse City, Michigan. The story was documented and can been viewed by clicking here “The Boat”
In 2004 the Continental was sold to the Rodgers family in Martinsville, IN. It was then sold again in 2008 to Marc Alaia where it lived at his marina on Indian Lake, PA until it was recently purchased by Tim and Deb Salt (remember them, that’s who the story is about) who transported the boat to her new home in Whitefish, Montana.

Tim Salt caught the wooden boat bug at an early age, as shown in this family photo taken at a YMCA Camp near Fresno, CA (circa 1958). It looks like he even found one of those rare Captain’s yachting caps from the period. 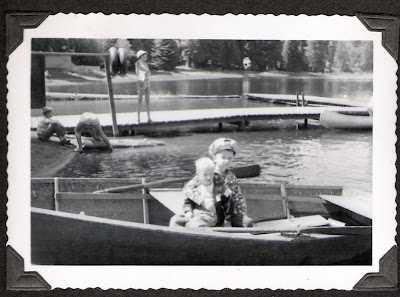 Although Tim first caught the wooden boat bug 0ver 50 years ago, Tim and Deb admit that they are relatively new to the wooden hobby. They started looking seriously for a classic wooden user boat in 2009 that they could use and enjoy on Whitefish Lake, near their home in Montana. They were interested in a Chris-Craft from the 1950’s, preferably with V8 power in lake ready condition.
When Tim spotted the 1955 Continental for sale on Ebay, he immediately knew this what he was looking for and made arrangements to buy it.
One other important thing to note – Tim Salt is a Skin Cancer Survivor, for over 3 years now which is great news! That’s one of the reasons they re-named the boat “Shady Lady”. The Continental’s original sedan hard top is critical to Tim’s future health.
The recent Sandpoint ACBS Show was their first ever Antique & Classic Boat Show, and they enjoyed meeting new friends and all the attention that “Shady Lady” received. They plan to use the boat as much as possible over the summer and attend the local Flathead Lake ACBS Show in August. 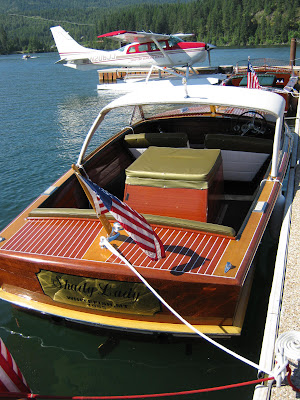 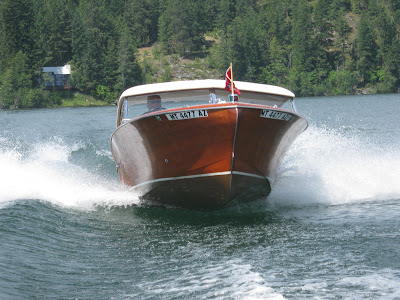 Welcome aboard Tim & Deb to the wonderful world of Woody Boats! 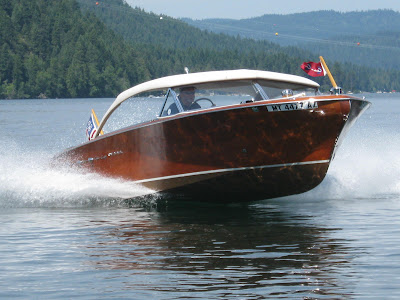