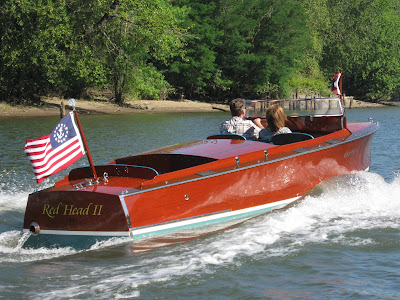 While attending the 18th Annual Portland Boat Show on the weekend, I was introduced to a Red Head. She was very attractive for her age, almost seductive sitting at the dock on Saturday – Best described as Understated Elegance.

Before I left home for the 1,600 mile round trip to Portland, I checked my Bucket List – As I always do before I ride my motorcycle, to make sure its up to date. And sure enough there it was… Note to self – Go for a ride in a pre-war Triple Cockpit Chris-Craft. However I never thought that it would be one that was capable of going 50 MPH! 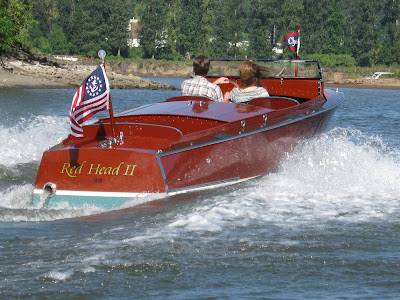 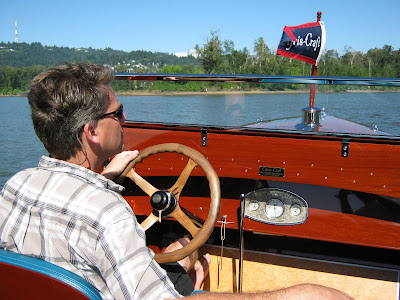 Rob DaPron grew up boating with his parents on the coastal waters of Washington State and Britsh Columbia, Canada – A life long wooden boat enthusiast. However he never thought that his love for wooden boats would some day become his career. Years ago, while working for the Seattle Times, his idea of a perfect weekend was to spent it at home working on his boats. In 2002 Rob started his business, DaPron Marine Restorations and hasn`t looked back. His first full restoration was a 1963 16ft Century Resorter, many boats ago now.
He commented – Now I get paid to do what I love.
Rob DaPron is a soft spoken man, who (in my opinion) prefers to let his workmanship do the talking – and it speaks volumes! 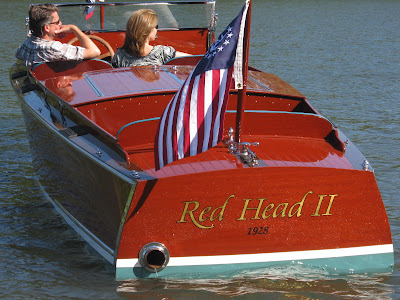 In 2005 Rob and Susan found Red Head II in New Hampshire. It was an unrestored grey boat, very complete for her age which was originally delivered from the Chris-Craft production facility to Detroit, Michigan in 1928. The original hull card for the boat noted that the boat was to be named Red Head II and left the factory with that name painted on the stern. Eighty-Two years with the same name.
Rob completed the full restoration just in time for the ACBS International Show in Coeur d`Alene, Idaho in 2008. 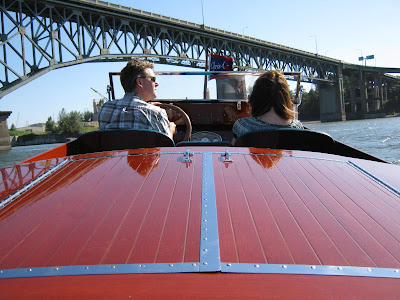 On Sunday morning we left the dock for our boat ride up the Willamette River. I stayed in the aft cockpit to take few photos and when Rob got safely out on the river he tickled the throttle and we were up to speed immediately. (It kind of caught me off guard, to put it mildly) I knew the boat was re-powered but man alive did she go fast! I was also very impressed how well she performed for an 82 year old design, it was just great. It gave me a new appreciation for Chris Smith and his design skills.

Then to top things off, Rob arranged for Ike Kielgass to join us with Nameless, his 1948 20ft Chris-Craft Custom, to use as a photo boat. Rob assisted with the Nameless restoration a few years ago. 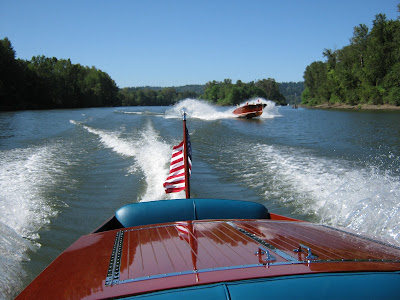 When Red Head II was restored, Rob wanted the boat to have an original appearance but with modern power because he said, We like to use our boats in the Pacific Northwest as much as possible, and prefer the reliablity and performance of the modern power. Rob installed a 315 hp Fuel Injected 5.7 Mercruiser in the boat. 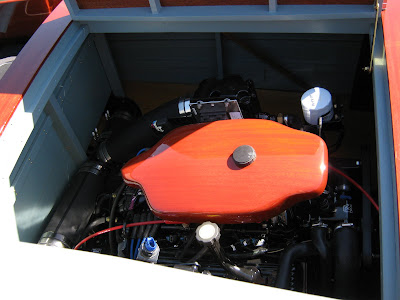 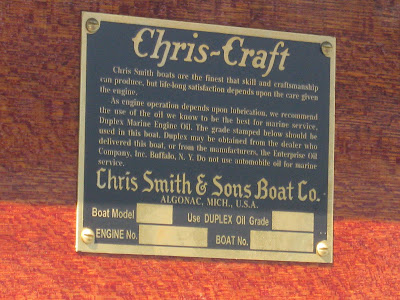 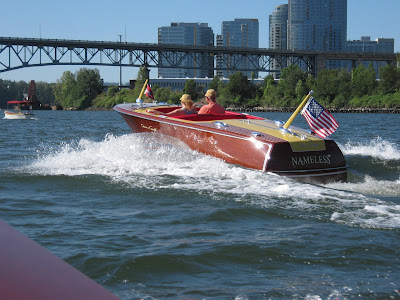 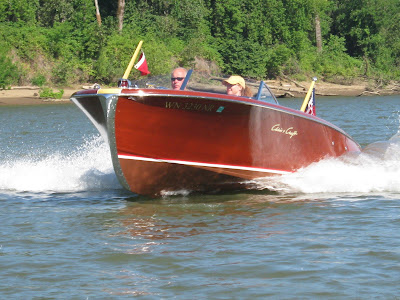 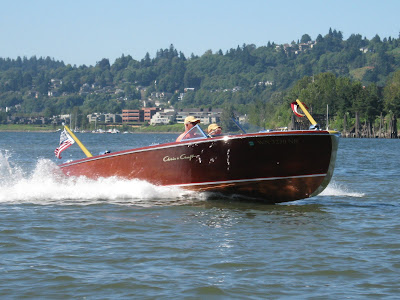 I learned another thing about Triple Cockpit Runabouts on Sunday. They are kind of like owning a pick up truck – when your friends know you have one, everyone wants to use it… So when you own a triple, when it comes time for the afternoon river cruise, all your friends show up for a boat ride too. Just kidding guys… Fellow WoodyBoaters Elaine & Gary Lord, and Mr. John Tyler (left) joined Rob and Susan for the afternoon river cruise. 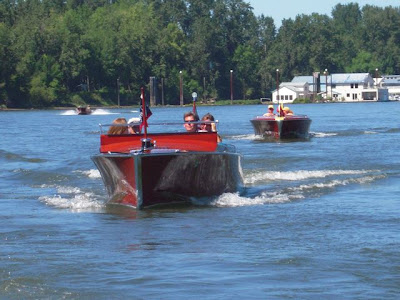 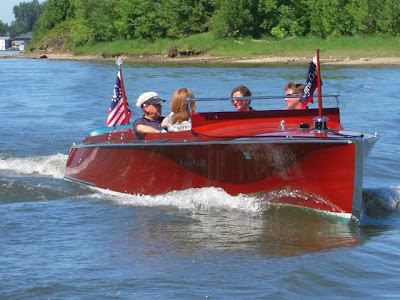 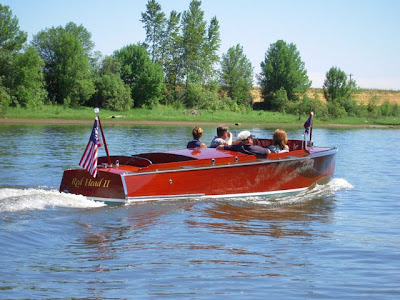 The river cruise photos were sent to me today courtesy of Gary Lord, thanks they good great!
Thanks to Rob and Susan DaPron for offering to take me out in your boat and the wonderful experience, so we can share it with our viewers. Thanks to Ike Kielgass for your assistance with the photos. It was the highlight of the weekend for me.

Also, a few house keeping items from the boat show. Thanks to Mike Mayer for all your hard work on the boat show, and for providing VIP status to WoodyBoater throughout the weekend.

Special thanks also goes out to Mike Green from Maritime Classics for your hospitality on Sunday. Here`s Mike aboard Fairweather Jane, a 1948 22 ft Chris-Craft Sedan owned by Chuck & Trish Kellogg. 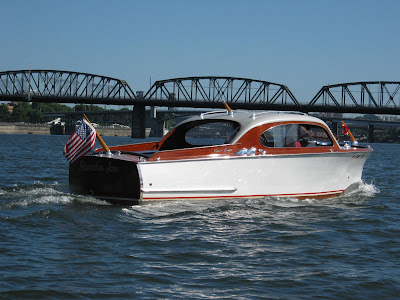 And as promised on the Saturday boat show report, here is a shot of Phantom, a 1936 52 ft Astoria Marine Bridge Deck Cruiser also owned by Chuck & Trish Kellogg, which won the award for Best Cruiser this year. 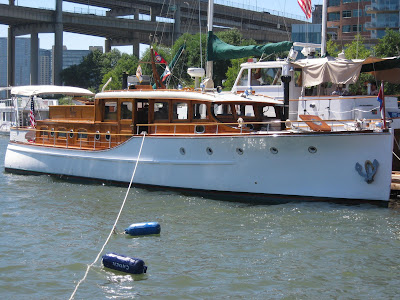 3 Responses to “I Met a Red Head in Portland, Oregon”