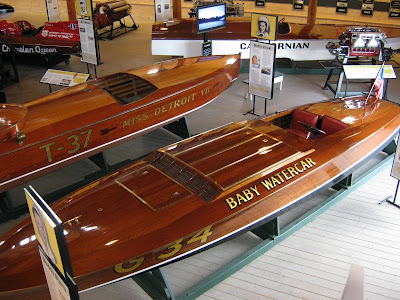 While attending the 2010 Antique Boat Show & Auction in Clayton, NY we toured the Quest for Speed Exhibit in the Gold Cup building at the Antique Boat Museum.

The Antique Boat Museum was established in the 1960’s to preserve the cultural heritage of the St. Lawrence River in Clayton, New York. The museum has assembled North America’s best collection of pleasure boats, with over 300 examples of antique & classic boats ranging in length from 8′ to 106′, including canoes, mahogany runabouts, to larger commuter and racing yachts, to a houseboat. The museum has built an impressive waterfront campus that encompasses 4.6 acres of public program space, 1900′ of dockage and 1300′ of St. Lawrence River shoreline. The ten buildings on the campus contain 27,000 square feet of exhibit space and 33,000 square feet of public program, collections storage, archives, library and administration space.

The Quest for Speed Exhibit was opened in 2008, located in the Gold Cup building which was constructed in 2001. The Gold Cup building is a magnificent post and beam structure, with beautiful Douglas Fir trusses, boathouse porches and dormers, and a unique viewing terrace which seems to amplify the museum experience. 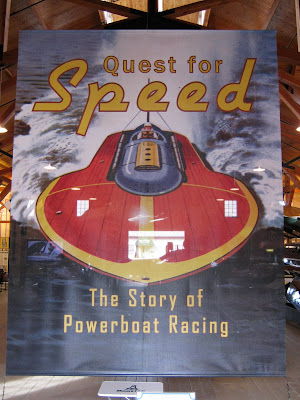 Miss Detroit VII was built in 1924 by Gar Wood and originally named Teddy. Under the name of Miss Detroit VII, she won Detroit’s 1924 150 mile Sweepstakes race in an event that W.G. Sheehan, writing in Yachting magazine, called the most sensational race ever staged in Detroit. 50 laps of the three mile course made for a gruelling contest. A field of 14 boats started the race, including such notables as Edsel Ford, driving Woodfish, Caleb Bragg in Baby Bootlegger, Horace Dodge’s Baby Horace and Charles Chapman in Miss Columbia. 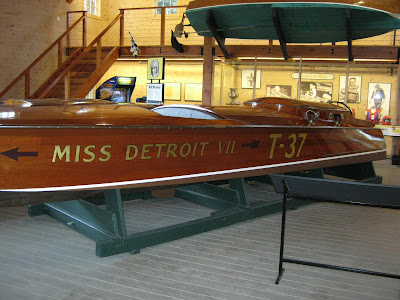 Gar Wood jumped out to an early lead in Miss Detroit VII. Despite strong challenges from Gordon Hammersly in Cigarette Jr., Gar Wood led the entire race and won the $1,000.00 first prize with an average speed of 48.7 mph. 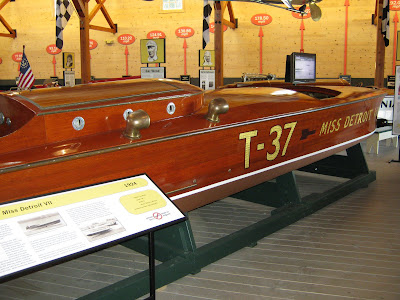 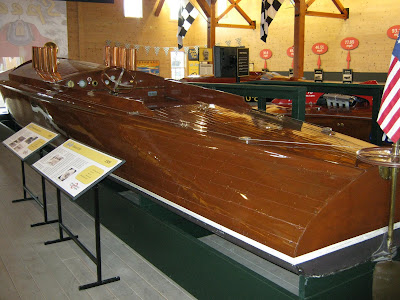 Dixie II was restored to her original racing configuration in which you see her today, by Frank Miller of Put-In-Bay, Ohio and used her for a pleasure boat. In 1973, after attending several of the early Antique Boat Shows with the boat, he donated her to the museum for future generations to enjoy. 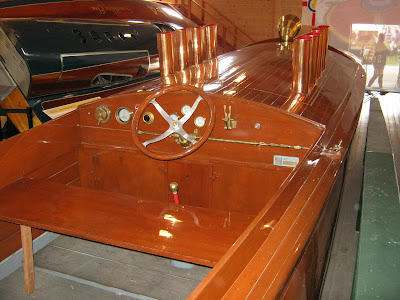 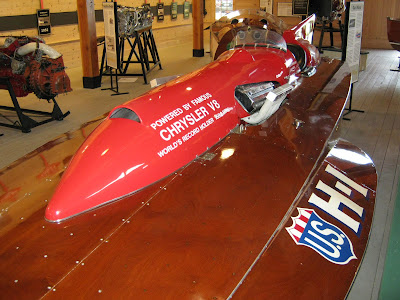 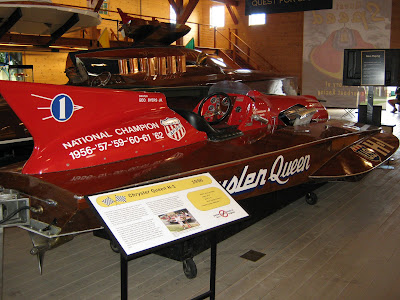 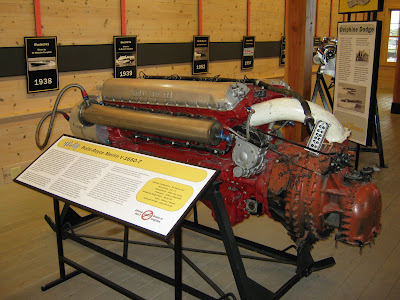 Horace Dodge Jr. developed this Modified Experimental Packard 1M-1242 Aircraft Engine to compete in Gold Cup races. The single stage-supercharger reportedly produced a whopping 55 lbs of boost. Some records indicate that the engine produced nearly 1000 hp at over 4000 RPM, but such figures were likely exaggerated. The engine was intended for use in Delphine X, which was to be Horace Jr’s entry in the 1938 Gold Cup, but was never put to use. 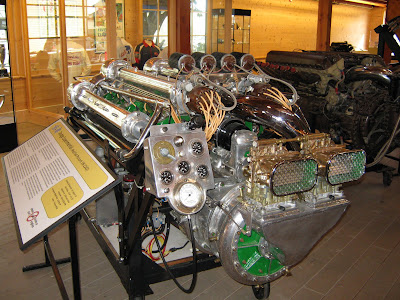 There’s also a great display of vintage hyrdoplane memorabilia that certainly brings back memories from back in the day when piston engine unlimited hydroplane racing was popular. 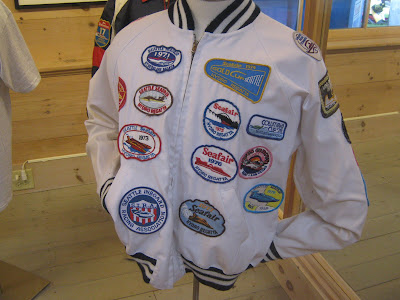 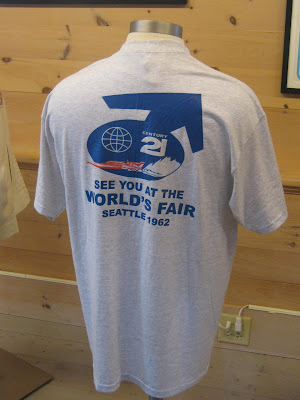 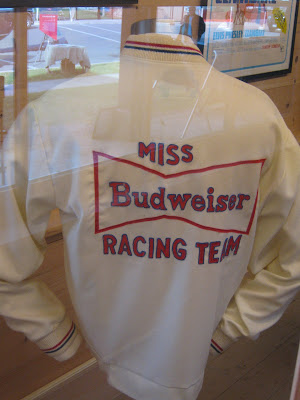 Tributes to the legendary race boat drivers and owners can been seen throughout the exhibit. I remember being in the pit area at the 1978 Columbia Gold Cup Race on the Columbia River in Tri-Cities, Washington. I had the opportunity to meet Bernie Little who was a “Larger than Life” character. His boat Miss Budwiser won the race that day with Ron Snyder at the controls – I’ll never forget that day… 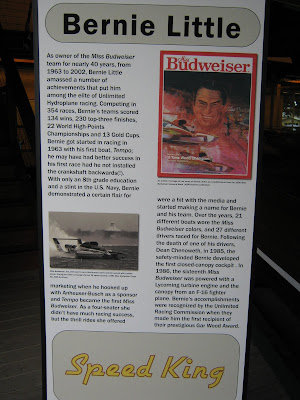 Bill Muncey had a reputation as one of the finest hydroplane drivers ever. Bill went on to start 194 races, winning 62 times. Bill drove the inovative Atlas Van Lines sponsored hydroplane to 24 victories. 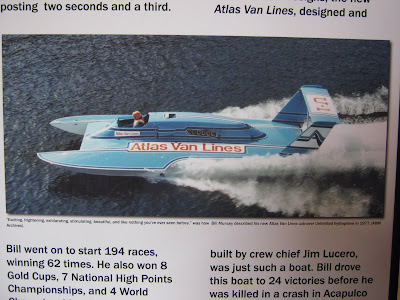 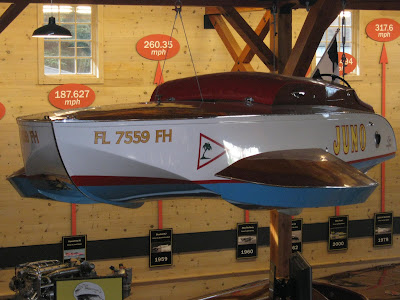 Miss Canada (below) is a unique 1938 25′ Greavette Boat Works race boat, incorporating an innovative “Double-Concave Two Stepped bottom.” This unique configuration was was an evolution of the first stepped hulls, known as “Shingled” bottoms because they resembled nothing so much as overlapping roof shingles on the hull towards the stern. Steps allowed the hull to break free of the water and ride on a much smaller surface area. This reduced friction and made for a faster raceboat. 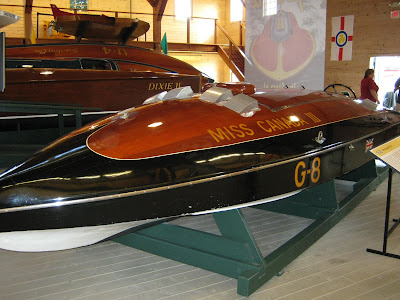 This strikingly-beautiful boat had a successful racing career, but her overall success was interrupted by WWII. 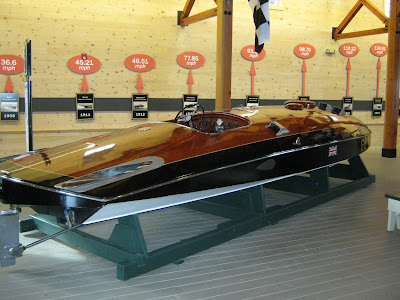 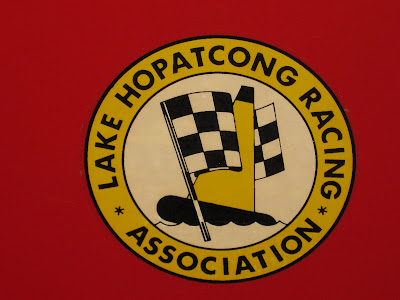 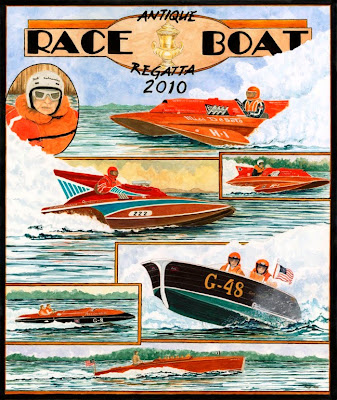 3 Responses to “Quest For Speed Exhibit in Clayton, NY”