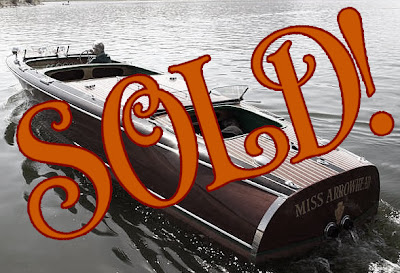 If you were lucky enough to watch the Monterey 5 Auction on HD TV over the weekend, you saw three killer boats sell under the gavel. But did all 5 sell? YES SIR/Mam. One sold durring a comercial break and the other 10 minutes after the auction… This also happened in Clayton by the way.  This has been a good step to having more classic boats on televised auctions, Mecum auctions and Scott Ales should get a big way to go for opening up the world of Classic Boats to a broader market. Mixing in boats with cool classic cars is a natural. And is a hit…Stay tuned for HUGE news on a new Auction slated for October… OVER 100 Rare Boats in one NO Reserve Auction…. The Warner Collection is going on the block for what will be the event of the year…
Here are the results from the Monterey 5  Auction…Thanks for reporting in, Texx, Scott, Brian, and Don..

Riva Aquarama sold for 290K on the block to a family in Argentina… during a commercial break so if you were watching TV you missed it..

1940 27′ Barrel did not sell during auction but then an offer was accepted 10 mins later.correction, it sold for 275K

4 Responses to “Classic Boat Auctions..It's More Than A Hit Of The Gavel!”