This is why I wake up in the morning, fellow Woody Boater Bruce from Minneapolis sent this in a couple weeks ago.. I thought it would be fun to share.

I have an old woody cabin (1939 log) in Western Wisconsin, just across the border. It has a great boathouse with guest quarters above but would only accommodate a 16’ or 17’ boat. So I started looking at modestly-priced utilities in that size range. The one I fell in love with was the Gar Wood Ensign. This Spring my wife finally gave me the go ahead to sell the fiberglass thingy in the boathouse and find a woody. So I started cruising online and called all the local restorers. One of the best in this area is a guy named Sherwood Heggen. (Yes, Sherwood, and with your spelling skills that would be sure wood.) After a week he called me back and said he forgot that he was storing an Ensign for a customer in a nearby barn. Sherwood forgot about the boat because the owner had unexpectedly passed away five years ago when the boat was 70% done. The widow hadn’t wanted to deal with the boat yet, but was glad to see it end up in the hands of someone who cared about it. 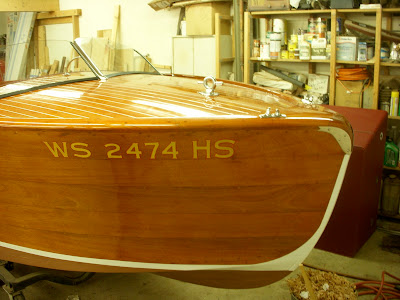 It was the perfect situation: The Ensign had been done correctly and well up to that point, yet I would have the “fun” of seeing the final work completed. What’s more, the boat had been purchased new by the widow’s stepfather, so it had some history. 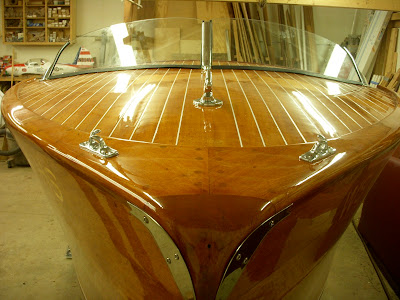 In addition, it was a rare mahogany-sided Ensign (although as was often the case with post war boats, the wood didn’t match nicely) with the more powerful 115-hp Chrysler Crown. It was made in March of 1947, a month before Gar Wood shut down.

But here is where it gets kind of interesting. After I bought the boat, I finally read a historical plaque on the building that my agency’s office is housed in. The plaque said that the building was originally built as a fire station, but in the late 20’s had been used as a Gar Wood boat factory. I dug around online and found that the building had been owned by Winfield Wood, Gar’s Brother. So I started calling some people I knew in our local ACBS and finally ended up talking to Todd Warner. Todd didn’t think the building had produced boats, but was likely used to build hydraulic parts for Gar’s dump and garbage truck division. But he also told me that there were a lot of Woods in the Minneapolis area, since this was Gar’s hometown. So I found a number for a Winfield Wood, that turned out to be Winfield’s grandson. He didn’t know about the building but said that his father, Warren Wood, did know the history. 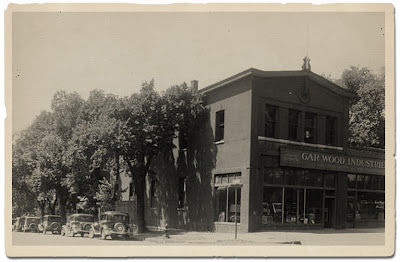 A few days later Warren and Winfield called me back. Warren is in his 90s but was great to talk to. It turns out that his father had used our building to build hydraulic equipment for Gar. But there was yet another twist. After Gar was finished with his Miss America race boats, he had sent a couple back to Minneapolis to his brother Winfield. Winfield used them to give rides at the old Excelsior Amusement Park on Lake Minnetonka in the early 30’s. He said they added a couple of seats and charged a whole dollar a ride, since the engines drank so much gas. Winfield also used our building to work on the Miss America boats. (I THINK he said they were number 5 and 7, but don’t quote me on that.) You can actually see the outline of two massive garage doors on our old brick wall.

So there you have it, I now have a Gar Wood of my own. And every day I sit my ass on a spot where one of Gar’s Miss America boats once sat. At least, as far as I can tell. It’s not a Baby Gar, but it is my baby Gar. And did I mention that it’s not quite in the water yet? A delay on the engine means it will be launched in a week or two, at the latest.

2 Responses to “A Great Classic Boat Story From A Reader.”