Recently at the ACBS International Show up in Bay Harbor Michigan we were fortunate enough to be able to see these two fine GarWoods side by side.. Something that has not happened for a very long time as you will read below.. You will also not likely see them together again for some time since they live on opposite ends of the North America. On in the Western part of Canada and the other here in Richmond. Fellow Woody Boater Dick Kish was kind enough to send this note along with more images.. Enjoy and happy Friday. 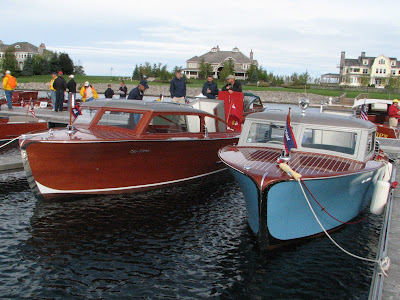 “End of The Line” is a 1946 GarWood 22 foot Sedan, serial number 7304, owned by Paul and Karen Harrison of Calgary, AB. She has been restored to her original all varnish finish with red, gray and varnished interior. “End of The Line” was shipped March 11, 1947, and to the best of our knowledge, the last of this series of sedans. 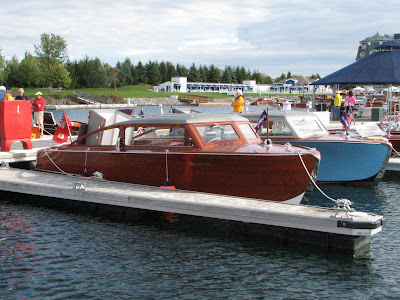 Dick and Linda Kish of Richmond, VA own “Misty Morning” a 1947 model of the same sedan, serial number 7301. In the Fall of 1946, she was pulled from production to be prepared for the January,1947, New York Boat Show as an example of Norman Bel Geddes “new image” of GarWood Boats. “Misty Morning” was finished with a blue painted hull, gray cabin and interior but retained the varnished decks and transom. She has been restored with the original paint scheme and blue and gray interior. 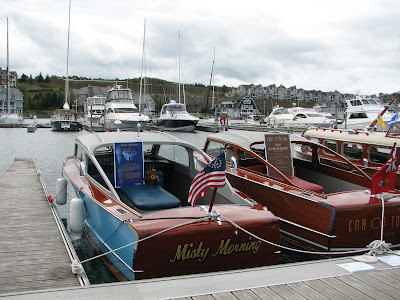 These two boats are the only known remaining of this series of eight built by GarWood. With only three digits difference in their serial numbers, it is assumed they were built side by side. They appear together again after 64 years at the 2010 ACBS International Boat Show as an example of GarWood’s efforts to create a “new image” of their 1946 boats for 1947. Since “End of the Line” is based on the Western Canada and “Misty Morning” in the Virginia, these boats may never again be together.