If you missed the big Smith Mountain lake show, you missed the launching of a one of a kind WeldWood, lovenly restored by fellow woody boter Phil Jones.. Here is a great video of the event, and her history written by Phil himself..

This boat was built by US plywood also known as Algoma Plywood and Veneer Co. and now Algoma Hardwoods. The Co. has been in business for more than 100 years. 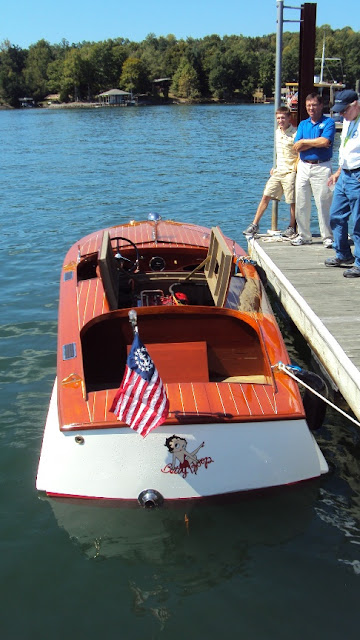 During WW II US plywood constructed boats and landing craft for the US government. After the war US plywood wanted to break into the new and blooming recreational boating market fueled by returning GI’s. US plywood had by this time, with the merger of Weldwood products, developed a method to produce mahogany plywood hulls; utilizing resorcinol glue and hot molding method. US plywood wanted to mass produce hulls to be distributed to whole sale boat distributers, which in turn would complete the boat in their design, transom, interior, power option put their name on the product and sell to the general public.
Two brothers, Virgil Lehmkuhl and Curtis Lehmkuhl worked in the R&D department at Algoma Plywood And Veneer Co. in the 40’s and assisted with the design and construction of WELDWOOD a 16’double cockpit executive runabout, with a Grey Marine Fireball 90, twin down draft carb setup. 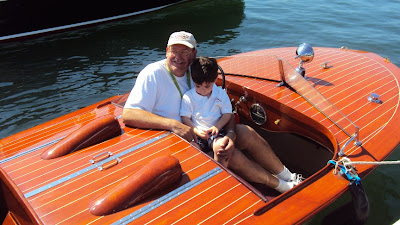 This boat was a one off unit specifically constructed for upcoming trade shows, and occasionally used to give visiting dignitaries rides on the river at the plant. One of the brother’s took WELDWOOD out for her maiden voyage. The brothers also contributed to a docking system designed with two pedestals that attach to the brass fittings on the boat. This allows the boat to roll with the sea and not bang into the dock. A hand peened brass plaque was also produced to attach to her stern.

WeldWood saw little use other than trade show events. As the Co. began to produce more hulls, WeldWood was retired. The company offered her to the original designers Virgil Lehmkuhl and Curtis Lehmkuhl.
WeldWood was put in a barn in Sturgeon Bay, Wisconsin and there she stayed until 1986.
In 1986 Virgil and Curtis Lohmkuhl decided to pass the “WELDWOOD” to Paul Kruger, there nephew. At the time of transfer WELDWOOD had 143 hours running time on her motor. Virgil and Curtis reviewed WELDWOOD ‘S operating systems with their nephew. That summer Paul used the boat sparingly, and entered her in the local wooden boat show, where she was the “featured boat”. Soon after, Paul retired her back to her original resting place on the family farm in the back of the old barn, and there she sat till Jan. 2008.
2008 and the financial meltdown that ensued brought WeldWood back out into the daylight. Times had gotten tight for the farm implement business that Paul owned. Paul decided it was time to liquidate some of the items that had been stored in that barn over the years.
January 2008 WeldWood arrived in Lynchburg, Va. to her new owner, Phil Jones. Her white sides were faded and filled with crazing. Her varnish had begun to break down in areas, and she was covered with 23 years of dirt and grime. On the bright side, all was there unmolested for 60 years.
On and off over the next two and a half years WeldWood was refinished by her current owner. Her hull was stripped, some wood repair performed, and a new finish applied. Motor gaskets were replaced, original brass fixtures were rebuffed, original chrome parts were rechromed, and the original 6” gage was cleaned only and retains its original face.