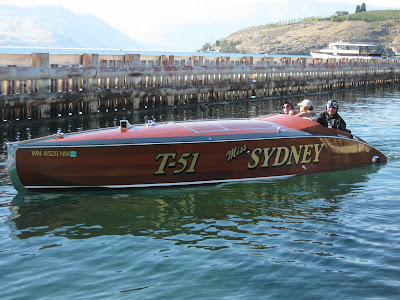 For 16 years the Vintage APBA Hydroplanes and Inboard Raceboats have been coming to Lake Chelan, Washington for an outstanding exhibition of speed and sound. For the first time this year the Pacific Northwest ACBS Chapter joined the event to show off some beautiful Antique & Classic Wooden Boats from back in the day.

One of the awesome wooden boats on hand for the show was “Miss Sydney” a 23′ Dewhurst Gentleman’s Racer owned by long time enthusiast Curt Erickson from the Seattle area. On Saturday morning Ike Kielgass (“Nameless”) and Rob DaPron (“Red Head II”) introduced me to Curt Erickson, my new friend. Curt took the time to show me around his boat and then said “Would you like to go for a ride later today?”

In the afternoon, while the Unlimited Hydro’s were doing laps at speed, Curt and I went out in “Miss Sydney” to get closer to the hydro’s. As we were flying across the lake, all of a sudden Curt slowed down in the middle of the lake and stopped. He turned to me and said “You Drive.” So we switched seats, he explained how the controls worked and then said “When you take off, you have to get the 454 up to 2,500 RPM so you can see over the front.” Off we went, and immediatly got her on plane as he suggested and we were going at a good speed – at least for me. Then he looked at me, smiled and motioned with his hand to pin the throttle… So I did. With the Chevy Big Block barking out the exhaust, now we were really going fast. I’m not sure how fast we were going but to me it felt like I was in one of those hydros!

The faster we went, the more Curt smiled. Thanks Curt for the opportunity, that was the highlight of the weekend for me and I really appreciate it. 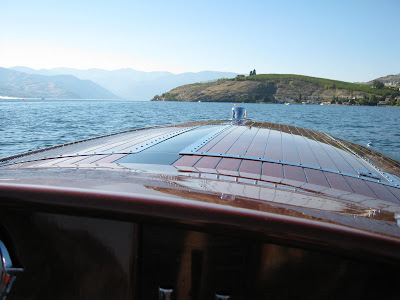 On Saturday, Rob DaPron said to me “Where else in the country can you get this close to these Vintage Unlimted Hydroplanes at 130 MPH”, and he is right. Curt and I were probably 100 yards from the edge of the race course when the hydros came thundering past, it was quite an experience. 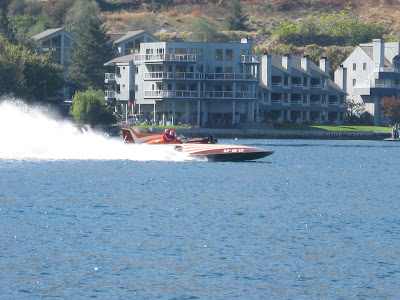 On Saturday morning I joined Mike Mayer (shown below) for an 8:00 AM cruise along Lake Chelan aboard his 1928 22′ Chris-Craft Triple. Mike (a fellow Woody Boater supporter) is the current President of the Columbia Willamette ACBS Chapter and owner of Lake Oswego Boat Company near Portland, Oregon. 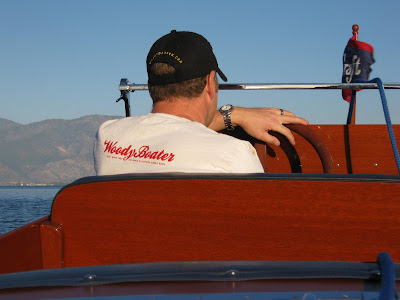 What a great way to begin a busy day of Woody Boating and Hydroplane watching. 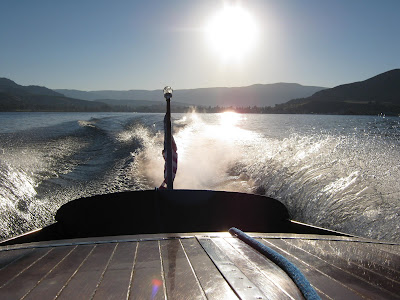 And before long we were joined by some more Woody Boater’s with the same idea… Folks in the Pacific Northwest all know that the end of the boating season is near and take full advantage of the warm weather in early October. 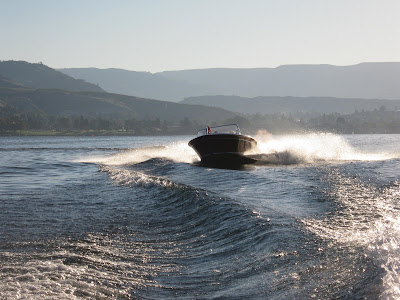 Like Mike Adams and his son aboard their 1964 Century. 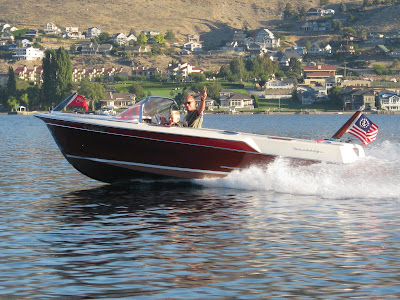 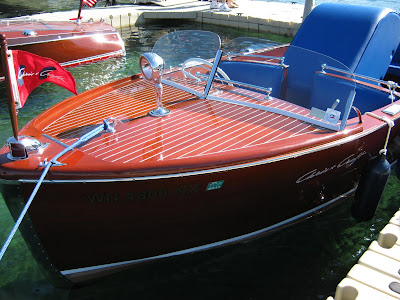 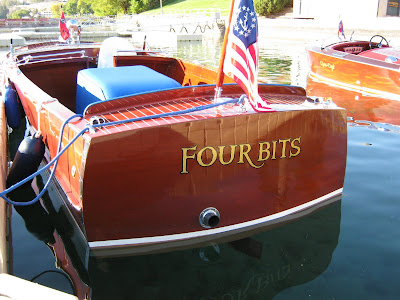 “Uncle Bob” was at the show… 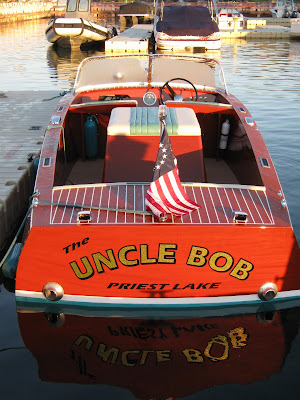 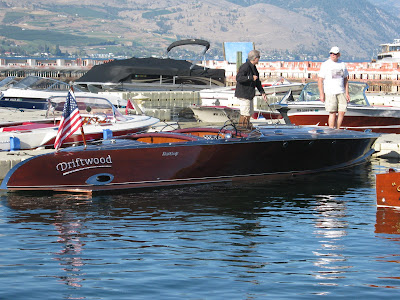 This is why you have to be quick when your trying to take a shot of an Unlimited Hydroplane racing past with a wooden boat in the foreground. Ooops – Missed the hydro but got the rooster tail instead. I’m still planning to take a photography course and
buy a better camera this winter folks! 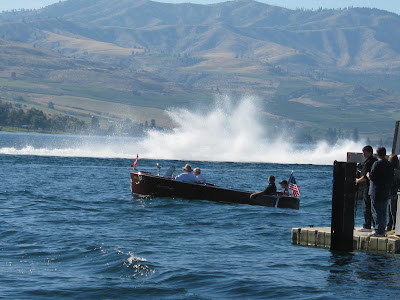 Dick Dow (below) is the President of the Pacific Northwest ACBS Chapter. For the last few years, they have been searching for a place to hold their annual boat show. According to Dick it’s becoming more and more difficult to find a suitable area near Seattle. From the response to this event, Lake Chelan may be an ideal candidate for a future Pacific Northwest Chapter show. 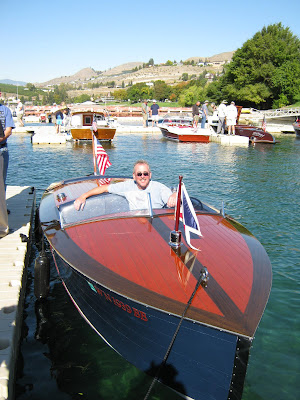 Lake Chelan appears to have lots of good public dock space for a show, reasonably priced accommodations, centrally located and a wonderful laid back, local atmosphere. Not to mention that it’s a nice fit with the annual APBA Hydroplane & Raceboat event. 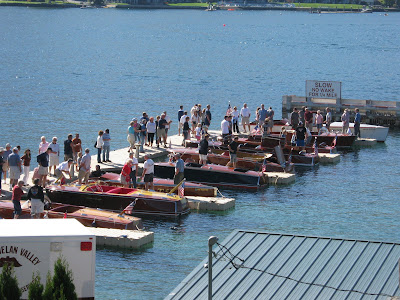 “Grand Rouge” the Overall Best of Show winner at the 2010 Sandpoint ACBS Boat Show was on hand. A beautifully restored 1939 16′ Chris-Craft Racing Runabout owned by Kris & Tom Bassett from nearby Wenatchee, Washington. 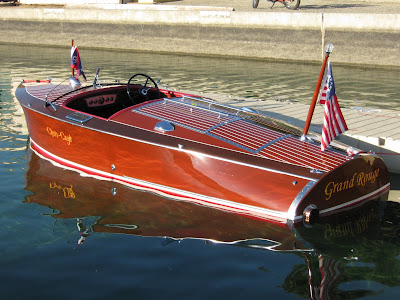 On Friday we spotted this “Fixer Upper” project boat in the Lake Chelan Marina parking lot. We had a few of out reader’s respond as to what the boat was. Possibly designed by Buster Johnson at Johnson Boats in White Bear Lake, Minnesota. On Saturday, some one at the boat show commented that it may have been made by the Doane Boat Company from Wenatchee, Washington. Also Fellow Woody Boater Brian Franchini may have some information on the boat. 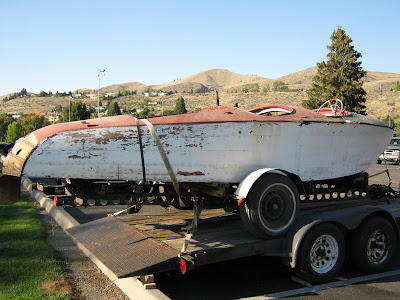 The current owner is looking for someone to team up on the restoration. For more information you can contact Mark Evans at 509.679.1360 or at mark@u4hydro.com
Interesting to note the similar steering wheel in this boat and in the 1961/62 Century Coronado (shown below) that was on diplay at the show. 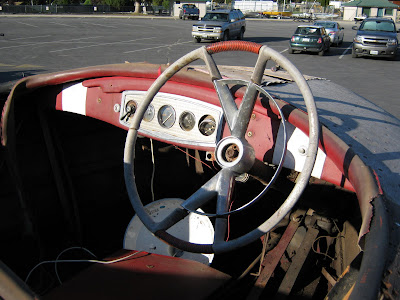 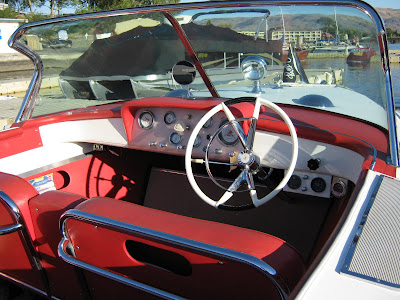 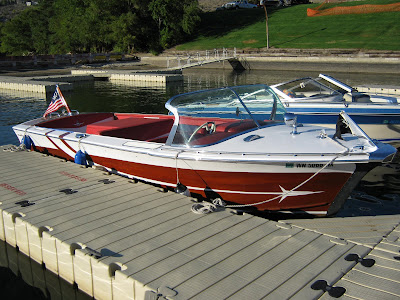 One last look at those glorious Unlimited Hydro’s – What a great weekend event!
“2010 Vintage Hydro Palooza” 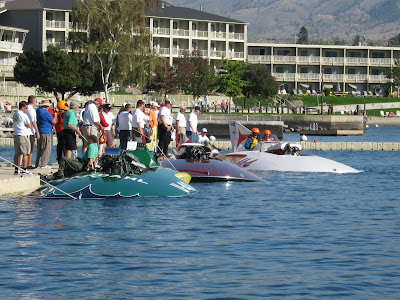 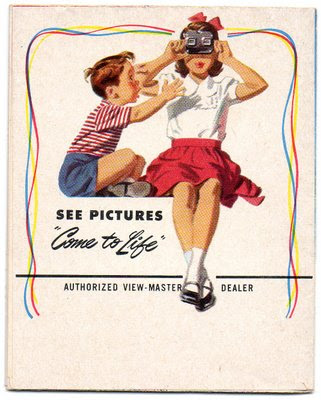 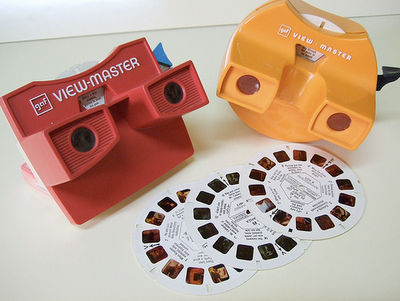