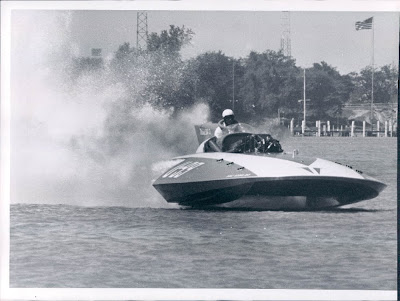 After seeing our Vintage Hydroplane Palooza report from Lake Chelan last Friday, Woody Boater received an e-mail from Clif Ames inquiring about “Mariner Too” a Vintage Unlimited Hydroplane from the 1960’s. (Above photo of “Mariner Too” from July 12, 1963 – Courtesy of the Detroit News)

In 1965 I crewed on an unlimited hydro in the races at Willard Bay, Utah. It was an exciting week. The crew were my NCO’s from Hill AFB. We changed engines five times. The boat was named Mariner Two. The driver was a retired pilot, an Air Force Colonel, can’t recall his name. I believe the number was U-22. All the biggies were there. Have you seen the boat in your travels? Thanks, Clif Ames

So after experiencing the awesome sights and sounds of the Vintage Unlimited Hydroplanes at Lake Chelan, we decided to investigate to learn more about the history of “Mariner Too” and Warner Gardner for Clif Ames. 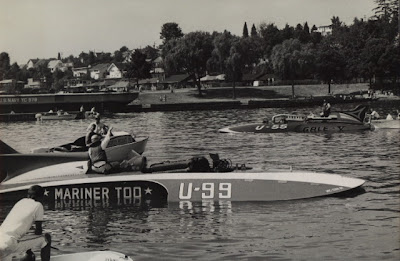 “Mariner Too” U-99 (Above photo courtesy of Fred Alter Vintage Hydroplane Scrapbook) was one of the last Unlimited Hyrdoplanes to be designed by Ted Jones and was campained in 1964 & 1965. Ted Jones was considered by many to be America’s Top Designer of Hydroplanes in the 1950’s and 60’s, with many winning boats to his credit. Boats designed by Ted won 14 Gold Cups between 1950 and 1965 and 10 consecutive National High Point Championships between 1956 and 1965. Jones Unlimiteds raised the world mile straightaway record from 141 to 192 miles per hour between 1950 and 1960.

“Mariner Too” U-99 was owned by Jim Harrington from LaPeer, Michigan and was powered by a V-12 Rolls-Royce Merlin.

In 1964 “Mariner Too” U-99 was piloted by Colonal Warner Gardner who took her to victory in the 1964 San Diego Cup on Mission Bay. According to the Hydroplane & Raceboat Museum – The winner of the inaugural San Diego Cup was Jim Herrington’s MARINER TOO, driven by Warner Gardner. The victory came as a surprise to most participants and fans. Herrington and Gardner had never before won a race. And throughout her brief racing career, MARINER TOO had been a problem boat.

“That crazy MARINER,” as Gardner described her, had always been a roughriding craft. Moreover, she had never even placed in the top three at any of her eight previous race appearances.

But on race day, October 4, 1964, MARINER TOO had her act together. The favored MISS BARDAHL and Ron Musson won two preliminary heats but experienced mechanical difficulty in the finale. Gardner and MARINER TOO were there to pick up the marbles. They finished first, second, and first to outscore MISS BARDAHL, 1100 points to 927, this being in the days when race winners were determined on the basis of total points.

Unfortunately for MARINER TOO, the San Diego Cup proved to be her first and last day of triumph. In 1965, the Herrington team acquired the MISS LAPEER, the former MISS SPOKANE. It wasn’t long before MARINER TOO was shunted to the background in favor of MISS LAPEER, which was preferred by Gardner because of that boat’s superior handling characteristics.

MARINER TOO, the 1964 San Diego Cup champion, ended her days in obscurity. After being retired from competition, she served as a test bed for a turbine engine program that reached its conclusion in 1973 with Herrington’s unsuccessful turbine-powered MISS LAPEER–a 34-foot behemoth that never reached competitive speeds and was quickly retired.

Warner Gardner was Unlimited racing’s OTHER “Flying Colonel” (together with Colonel Russ Schleeh, who raced from 1955 to 1963).

Colonel Gardner didn’t start driving Thunderboats until rather late in life. (He was 46 years old when he qualified as an Unlimited driver at Coeur d’Alene, Idaho, in 1962.) Warner was a competitive presence until his death at Detroit in 1968.

He raced Limiteds and test drove boats built by Les Staudacher. When Shirley Mendelson McDonald bought her first NOTRE DAME from Staudacher in 1962, Les recommended his friend Gardner for the driving job.

Warner drove for NOTRE DAME for two seasons and finished fourth and fifth in National High Points in 1962 and 1963. His highest race finish was a second-place in the 1962 Spirit Of Detroit Trophy.

Gardner was discharged by the NOTRE DAME team after 1963 when Bill Muncey became available to drive following the retirement of the MISS THRIFTWAY. But Warner was hired almost immediately to drive Jim Herrington’s MARINER TOO in 1964.

MARINER TOO, truth to tell, was a very ill-handling boat. Gardner, in fact, referred to it as “that crazy MARINER.” Nevertheless, it was with this craft that Warner won a decisive–and surprising–victory in the 1964 San Diego Cup on Mission Bay.

In 1965, owner Herrington purchased a second boat, the MISS LAPEER, as a teammmate for MARINER TOO. MISS LAPEER was the former MISS SPOKANE. Gardner took an instant liking to it.

It wasn’t long before MISS LAPEER became the primary Herrington hull, while MARINER TOO was shunted to the background.

The Colonel piloted MISS LAPEER to victory in the 1966 Sacramento Cup on Lake Folsom. He finished second in the 1966 Indiana Governor’s Cup at Madison and the 1967 APBA Gold Cup at Seattle.

The Herrington team was not a big-budget operation. At some races, the entire crew consisted of Gardner and his teenage son, Warner, Jr.

Following the retirement of Jim Herrington after the 1967 season, the Colonel signed with Dave Heerensperger’s MISS EAGLE ELECTRIC team. The “Screaming Eagle” was the former $ BILL. For six years, it had been the epitome of mediocrity and had never won a race.

But with the newly formed team of Heerensperger, Gardner, and crew chief Jack Cochrane, the Rolls-Royce Merlin-powered MISS EAGLE ELECTRIC came alive and was the scourge of the Unlimited Class in 1968. Gardner took first-place in the Dixie Cup at Guntersville, Alabama, the Atomic Cup at the Tri-Cities, Washington, and the President’s Cup at Washington, D.C. MISS EAGLE ELECTRIC also took second-place
at Madison, Indiana, and third at Seattle.

Some of the other top teams on the circuit that year included Billy Schumacher in MISS BARDAHL, Tommy Fults in MY GYPSY, Bill Sterett in MISS BUDWEISER, Jack Regas in NOTRE DAME, Bill Muncey in MISS U.S., Dean Chenoweth in SMIRNOFF, and Jim McCormick in HARRAH’S CLUB.

But all good things must come to an end. And the end for Warner Gardner came on September 8, 1968, on the Detroit River. While contending for high position during the Final Heat of the Gold Cup, the “Screaming Eagle” became airborne and cartwheeled itself to pieces. The Colonel was critically injured and never regained consciousness. He died the following day in a local hospital.
A veteran of 63 combat missions during World War II, Warner was buried at Arlington National Cemetery.

Gardner’s Unlimited career was comparatively short–only seven years. He is one of only a handful of drivers to win a race past the age of 50. Always a fan favorite, the Colonel is remembered as one of the better of the best in the water sport of kings. 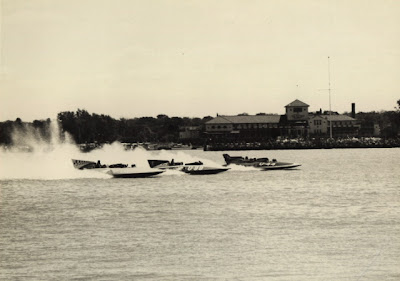 When I was researching photos for this story, I ran across this interesting photo of the Unlimited Hydroplanes at the 1959 Apple Cup in Lake Chelan, Washington. Back in the days when an actual APBA sanctioned race took place on beautiful Lake Chelan. In 1959 the Apple Cup was the first race on the APBA Unlimited Hydroplane schedule and was held on May 10th. 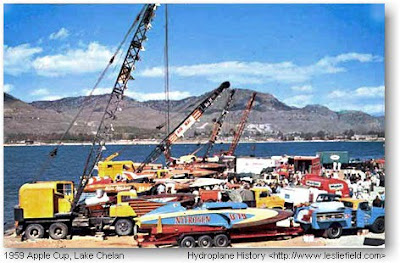