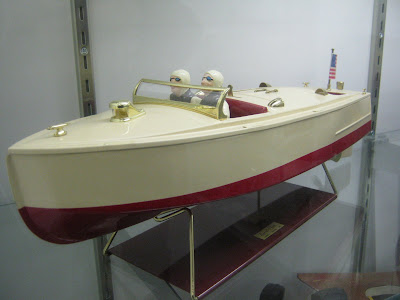 Day 2 of our Mikkelson Collection Tour features one of the most extensive collections of Toy Boats in the country. From the moment you first walk through the front door of the Mikkelson Antique & Classic Boat Museum, you are literally surrounded by every type of toy boat imaginable. Hundreds of toy boats from all over the the world neatly organized in display cases, many with their original boxes.

Like the perfect Lionel Runabout shown above and the Lionel Raceboat version that Matt used for the Woody Boater header this week. These toy boats, named Lionel Craft, were originally manufactured by the American Lionel Train Company in New York. They are powered by a clockwork windup motor.

According to Paul Mikkelson, the museum’s Owner, Collector, Curator and Historian the toy boats range in price from a few hundred dollars to well over $3,000.00 for some of the very rare, collectable pieces. More importantly, every toy boat in the Mikkelson Collection works. If Paul can’t get it to work (which is rare), he sends it out to someone who specializes in toy boats to be repaired. If it can’t be repaired, Paul is not interested in displaying it in his collection.

In the Spring 2002 Edition of the ACBS Rudder, Tom Kapocius wrote – Paul Mikkelson started to get heavily involved in toy boats through Bob Speltz, who wrote the compendium of antique boats. Speltz was the organizer for the Real Runabouts Boat Show in Albert Lea. When Speltz’ health failed, he began to have toy boat shows. That’s when Mikkelson got involved. When Speltz passed away, the organizers of the event asked Mikkelson to take over.

“I didn’t say ‘no’ loud enough,” Mikkelson said. “I didn’t really want the job. 1995 started the toy boat show. Bob had done three shows. I took over the fourth show. That’s when I picked up most of my toy boats.” Paul continued the World Toy Boat Shows with partner’s Bill Arick from Kansas & Dick Borgerding from Flushing, Michigan.

AristoCraft model boats are made by Bill Turner Jr at AristoCraft Boats in Alpharetta, Georgia the same company that manufactures the popular full size AristoCraft boats. This model is powered by a vintage electric Mercury toy motor. 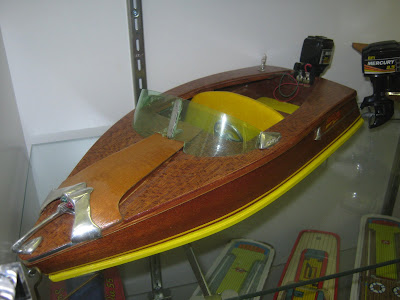 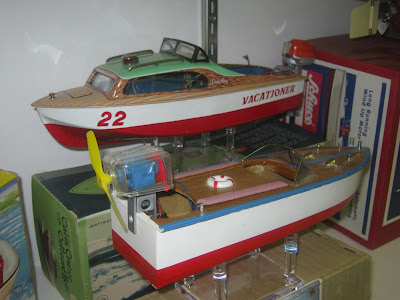 Below is a rare Schuco Elektro Record 5555 Speed Boat from the 1950’s complete with the original box. 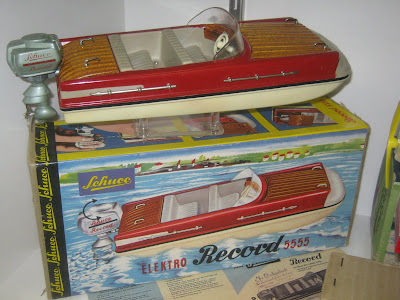 The German Schuco Toy Company obtained the manufacturing dies from the Lionel Train Company and produced identical copies of the popular clockwork windup toy boats. Just like the early fiberglass boat market in the late 1950’s…. I guess you identify the German made Schuco version by the flag of Germany. 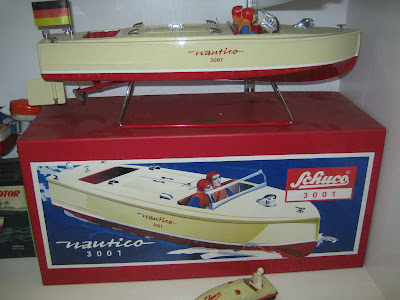 In 1932 the Sutcliffe Boat Company (from England) pioneered and produced boat hulls made from a single pressing as prior to this all boat hulls had been made in two halves and then soldered together. Most of the boats were produced using the 9 inch and 12 inch hull although other sizes were also made. As well as boats and submarines small metal pressings such as the metal box used to hold fire blankets, ‘penny’ loaf tins and a few other toys were made. Toy production continued until the factory closed in 1984.
Here’s a Sutcliffe clockwork windup “Bluebird” toy speedboat similar to the full size speedboat that Sir Malcolm Campbell used to set water speed records in Great Britain in the late 1930’s. Sir Malcolm Campbell also set his final land speed record of 301.337 MPH at the Bonneville Salt Flats in Utah on September 3rd, 1935. To learn more about Sir Malcolm Campbell and his amazing water speed records check out this great web site by clicking here. 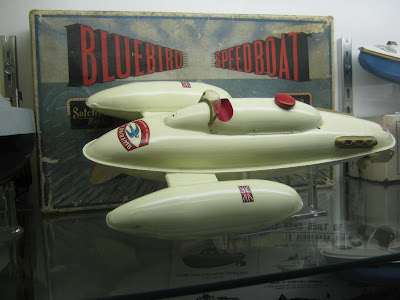 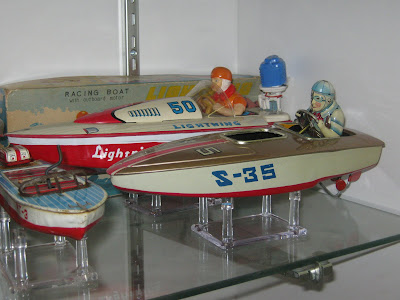 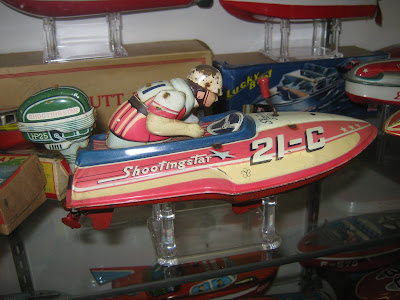 JEP was France’s principal toy maker until its closure in 1968. It made toys under the names JP, J de P and JEP (Jouet en Paris) from 1932. Today their toys are relatively common due to the immense numbers made, but like many other contemporary companies, they are best known for their toy cars and trains. Ruban Bleu is one of Paul Mikkelson’s favorite toy boats. These clockwork windups boats were considered to be very durable but expensive back in the day.
ITO was one of the premier Japanese toy companies after WWII. This futuristic wooden made ITO Rocket is powered by “D” cell batteries with twin props. Paul has a few of these in his collection and they attract lots of attention from the visitors to the museum. 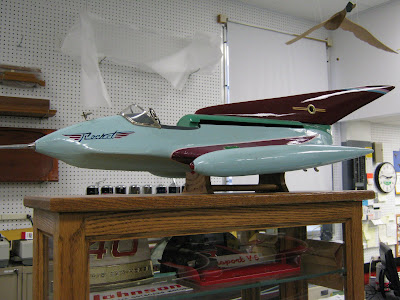 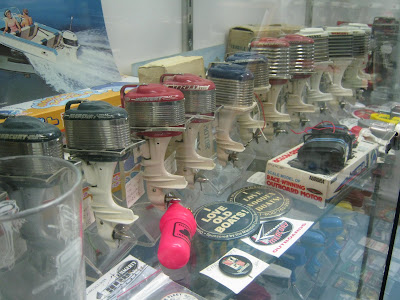 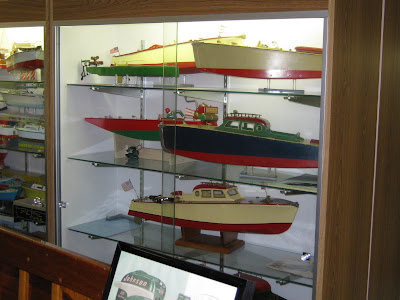 An impressive WWII Paper Toy Set was gifted to the Mikkelson Collection Museum by Norman Tempel of St. Cloud, Minnesota. These paper toy sets are rare because most of them ended up in the bathtub when the kids were looking for a toy to play with. This set survived the bathtub. 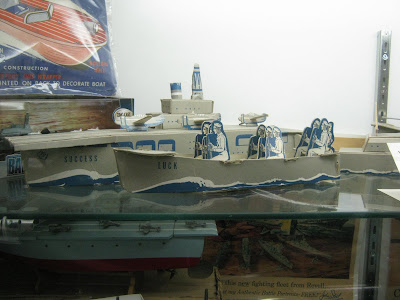 It was fun to see a toy version of “Miss Thriftway” after seeing the same boat in person at speed on Lake Chelan, Washington last month (see Oct. 3rd Woody Boater 2010 Mahogany & Merlot on Lake Chelan – Vintage Hydroplane Edition). It’s amazing how similar the toy versions are to the actual full size Unlimited Hydroplanes. These toy boats were usually made from balsa wood and powered by battery operated electric motors. 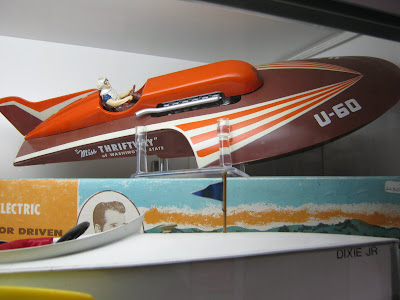 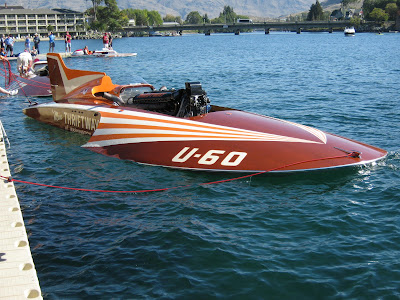 The U-60 below is also a balsa wood version. 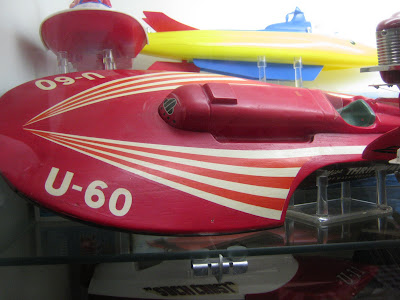 A toy version of the famous pink “Hawaii Kai” Unlimited Hydroplane from the late 1950’s. 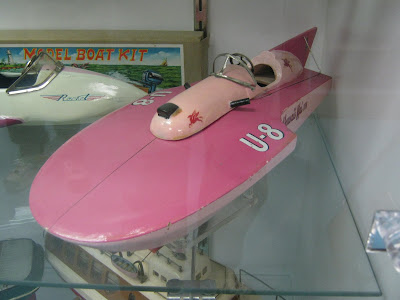 The Champion of Racing Hydroplane is a clockworks windup powered toy boat that featured Super Zoom Sound. I often wonder how many of these boats took off across the water never to be found again? 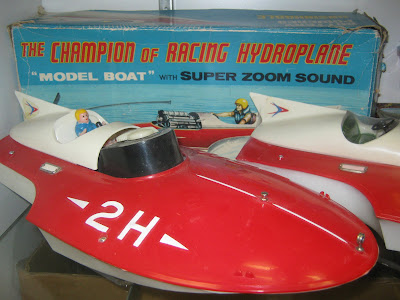 Flash came without a motor so you could install your own toy outboard power of choice. We decided that the box was a great marketing tool to get the kid’s attention in the toy store. 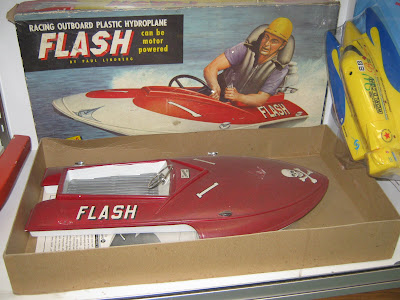 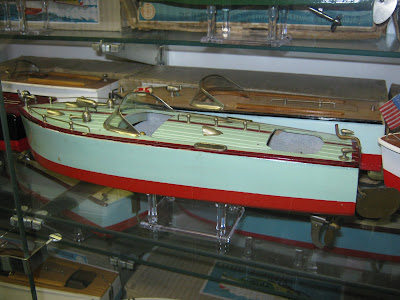 The Atwood Speedster was manufactured by the Atwood Toy Compnay, with a gas powered outboard. These were operated by tethering them to a post and measuring the speed. 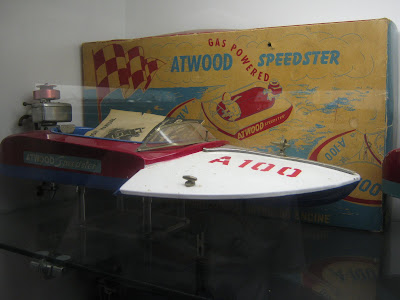 B.J.3. is an early wooden made gas powered toy race boat with a unique gravity feed fuel tank mounted above the inboard motor. 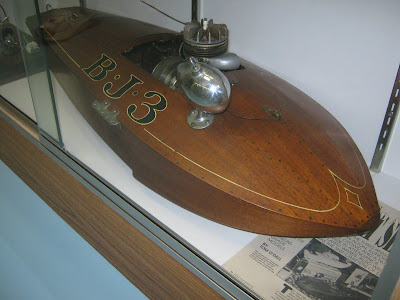 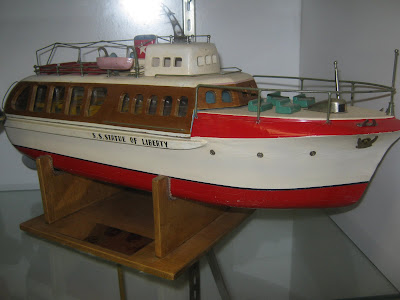 W.J. is another nice example of a futuristic Tanker Boat from the Japanese ITO Toy Co. 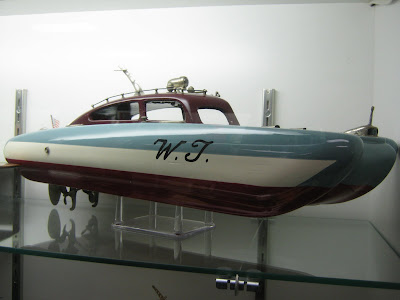 The box is for a Sterling Chris-Craft Cobra model and the actual toy boat in the photo is an RC Craft battery powered boat made in Ohio. On a interesting side note.. Our very own Kaptain Krunch’s father Cal Smith did the illustration on many Chris Craft model boxes including this one. The original drawing of this  sits on Krunches wall in his shop! What a small world… Or small scale world…. 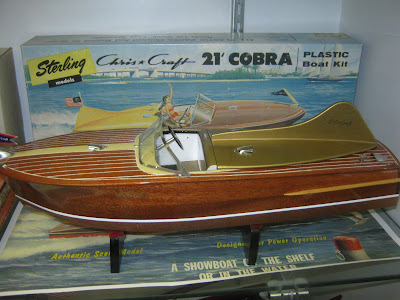 Stay tuned on Saturday for another installment of the Mikkelson Collection Tour, featuring Paul’s amazing assortmant of rare and original engines, human powered, gas powered and electric powered outboards. An electric outboard from the early 1900’s that was designed to run using a Model A or Model T Ford car battery. Did you know that boat guys in Minnesota were thinking about green technology a 100 years ago?
For more information on the Mikkelson Collection Inc, Antique &; Classic Boat Museum you can click here.