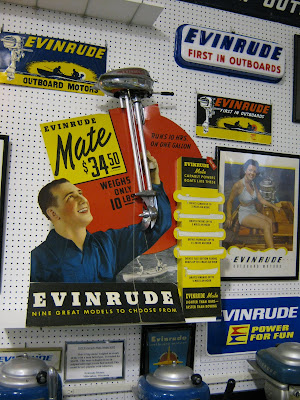 When you walked in to your local Evinrude Dealer in 1939 this is probably what was on display. A state of the art 1939 Model 4263 Evinrude Mate outboard. The sales slogan was “Lighter Than Oars – Faster Than Rowing.” Weighs only 10 pounds, runs 10 hours on one gallon of gas, and it can be all yours for 34.50 – Duck Call extra.

Thanks to Paul Mikkelson you can see the same Evinrude Mate display 70 years later at the Mikkelson Collection, Inc – Antique & Classic Boat Museum in Willmar, Minnesota. The museum is a celebration of Midwestern boating from the early 1900’s to the 1960’s, where outboard motors were commonly used on the small lakes of the region. 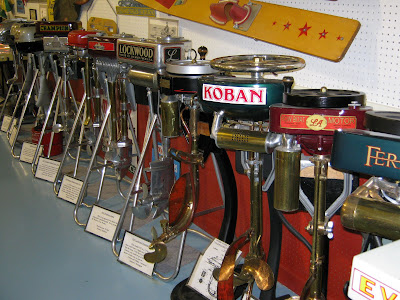 In 1930 the Indian Motorcycle Company from Springfield, Massachusetts produced this Indian Silver Arrow outboard. The 10HP motor was fitted with a beautiful finned muffler and featured a twist grip throttle from left over motorcycle parts. This motor was only produced for two years. 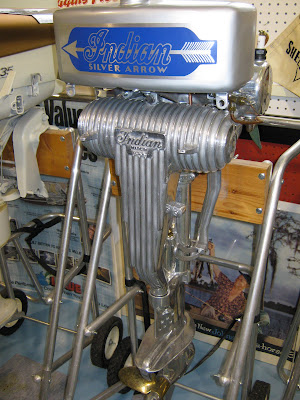 In 1932, Cliff Scott and H. Bruce Atwater started a small tool making and punch press operation. They quickly established a reputation for quality, and in 1935 Earl DuMonte approached them to build a small outboard for him to sell. DuMonte displayed the motors at a New York exhibit. Several hundred outboards were ordered. As DuMonte had purchased the name and rights to the Champion outboard motor from Sig Konrad, they shipped with the brand name CHAMPION. From 1935 to 1939, Scott and Atwater still operated their tool and punch press business as well as building outboards. In 1939 DuMonte landed a contract with Firestone to sell the CHAMPION in their tire stores. Scott and Atwater turned to building outboards full time. In 1941 Scott and Atwater with their CHAMPION outboards were the second largest outboard manufacturer in America. Only Evinrude was larger. This relationship with DuMonte and the CHAMPION outboards lasted until 1942. Above history courtesy of Scott-Atwater.com 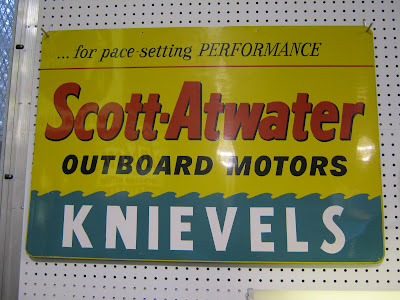 Here’s a perfect example of an original 1955 Scott-Atwater 30HP Bail-a-Matic outboard, the first year for the 30HP version from Scott-Atwater. 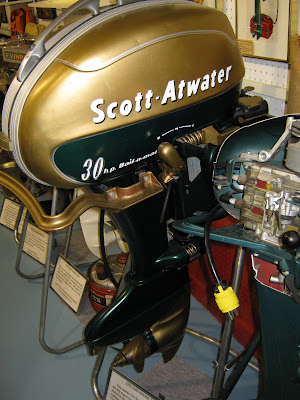 In 1956 Scott-Atwater was approached by McCulloch to sell their outboard operation, and Scott-Atwater sold out the same year. The brand name on the outboards (and clocks) eventually became Scott and Scott-McCulloch. 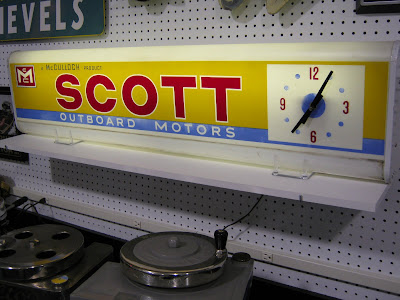 Paul Mikkelson’s collection of original marine related signs is remarkable, the walls are filled with signs, dealer clocks, etc from every manufacturer throughout the early years of boating. 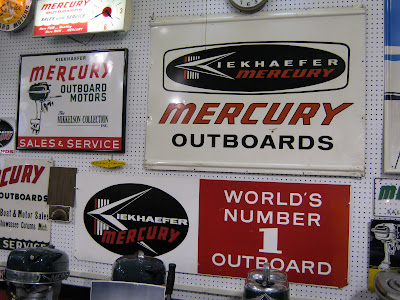 During our tour with Paul I noticed this colorful Mercury Outboard clock hanging on the wall. I commented to Paul, “So if you were a Mercury outboard dealer in the mid 1950’s they would give you one of these clocks to hang in your showroom, right?” Paul laughed and responded, “Only if you were a GOOD dealer.” Oh ya, the Iron Fist of Carl Kiekhaefer… 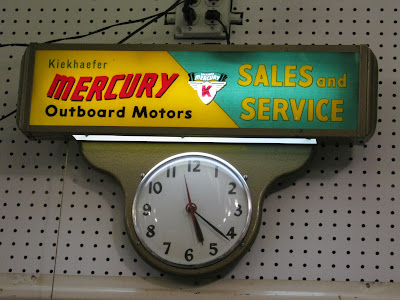 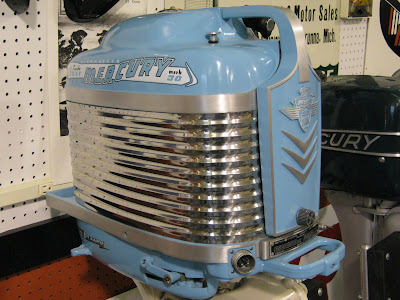 Paul Mikkelson also has a cool collection of original life preservers from the early days. 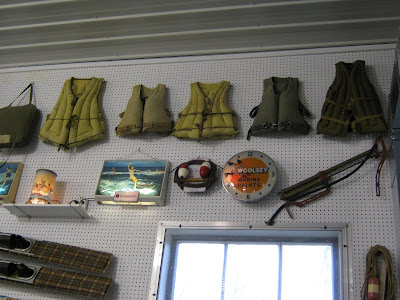 An original 1939 Johnson 5 HP LT (Light Twin) – An alternate firing twin with full pivot reverse and underwater exhaust weighs 33-1/2 pounds. This Johnson outboard motor was advertised as “Hit the Spot” for power, weight, performance and price selling for $109.50 in 1939. Displayed in the original wooden shipping box from Waukegan, Illinois. 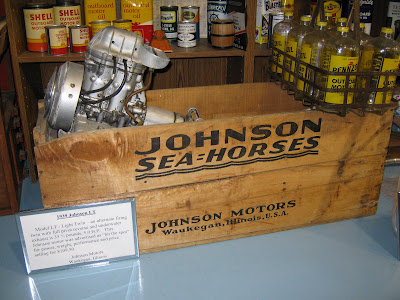 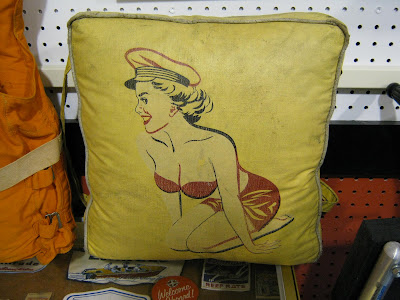 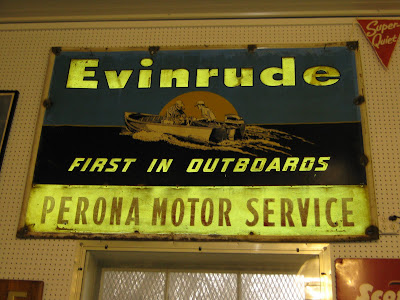 An immaculate 1941 Johnson P015 22HP outboard powering a 1941 14′ Falls Flyer. This Falls Flyer model was constructed of steambent oak frames and cedar strip planking covered with fabric. Only 8 of these rare watercraft are known to still exist. More on the outstanding collection of Larson Falls Flyer boats on Sunday. 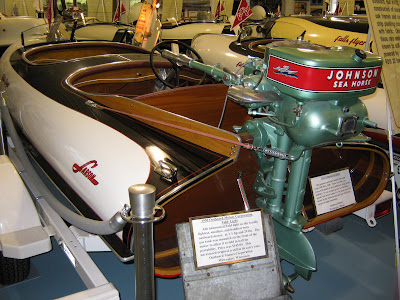 A Martin Model 200 20HP Twin. Click here to read a brief history of Martin Outboard Motors written by George Martin… or ask Paul Mikkelson when you visit the museum. 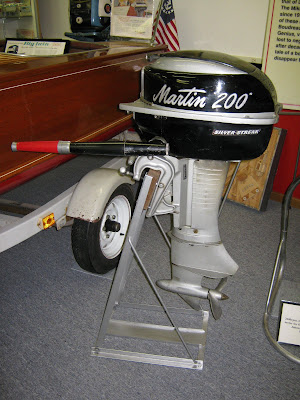 The Mikkelson Museum also has huge collection of original dealer promotional items which were very popular back in the day. The collections are organized for each outboard manufacturer in easy to view glass showcases. Below is a series of original Evinrude match books, pins, etc that the dealers gave out to their loyal customers, after you bought the motors… 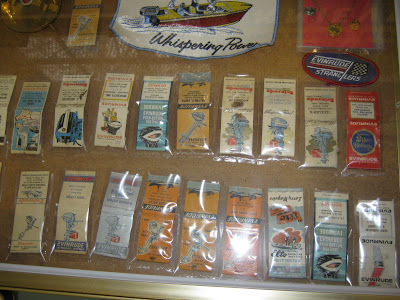 This is an assortment of mint original toy outboard motors and memorabilia that was used for various dealer promotions, many in their original boxes. In the bottom right hand corner of this display case (beside the Whispering Power patch) is an original set of Evinrude Salt & Pepper Shakers from 1958. So when you came home with your new Evinrude outboard motor you could surprise your wife with a new set of Evinrude Salt & Pepper shakers or a new deck of Evinrude Playing Cards… and everyone is happy! (Matt – you need to invest in some vintage Chris-Craft U-22 Salt & Pepper shakers for the when the big day comes…) Also, don’t forget you can click on the images to enlarge them. 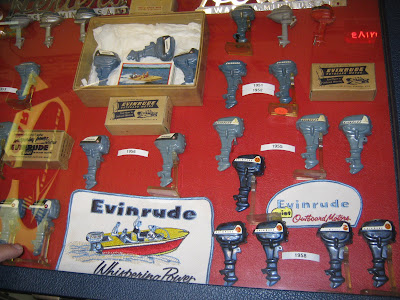 One of the many rare, original human powered propulsion systems on display at the Mikkelson Museum is this Aquacycle manufactured by Aquacycle Co. Inc in Covington, Kentucky in the early 1900’s. I’ll do my best to explain how it works. You simply hook it up to the back of the duck boat, or dinghy, or canoe… 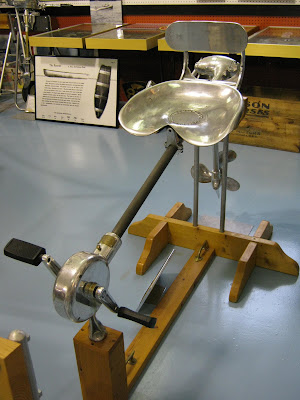 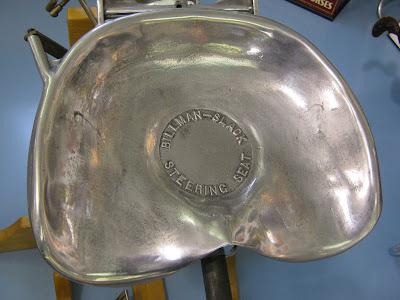 And turn your butt the direction that you want to go… and the prop shaft turns with the seat.
I know this Aquacycle works because Paul Mikkelson gave me a personal demonstration.
I wonder if we could hook it up to the 1956 Deluxe Stylemaster boat with the Baker Hydrofoil System get Lance Armstrong to operate the pedals?
By the way, we received a few comments and inquiries about the 1956 Deluxe Stylemaster with the Baker Hydrofoil System that was featured on Day 1 of the Mikkelson Collection Tour. Did it actually work? How did it handle? Was it dangerous?
On Friday I was speaking to Paul Mikkelson gathering some information for the Falls Flyer story on Sunday. I said to Paul, “If I came down to Minnesota next summer could we take the Baker Hydrofoil out on the lake for a test drive (or test flight)?” Paul laughed and said “Absolutely – It’s ready to go any time you want.” I said, “Would you show me how to operate it?” Paul answered “It’s easy, just give it some throttle and away you go!”
Paul obtained an original 8MM film from Gordon Baker that he now has on a CD and shows to visitors at the museum. The film explains how the Baker Hydrofoil System works and shows the system in action on the water.
So it looks like a road trip to Willmar Minnesota is in order next year for an exclusive Woody Boater test drive in the Deluxe Stylemaster Hydrofoil. WooHooo! 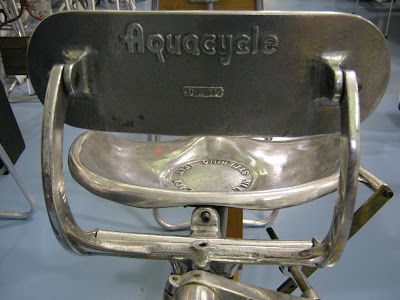 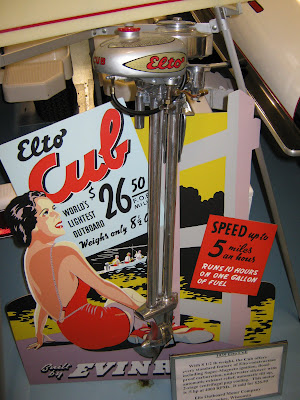 Then I noticed this vintage electric powered outboard motor in the museum, Paul said it was called an “Electric Oar” probably from the 1920’s. It utilized a Ford Mode
l A or Model T starter motor. You hooked it up to a Ford Model A or Model T car battery for power. 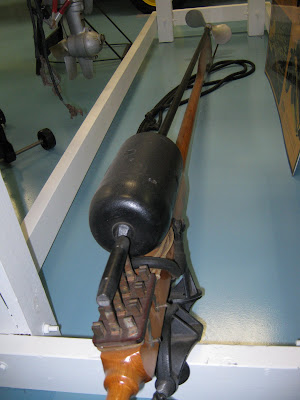 The switch on the Electric Oar handle can be adjusted to accommodate either 6 or 12 Volt automotive batteries. It may be one of those gadgets that you have to be careful what you tough when you standing in the water hooking it up… 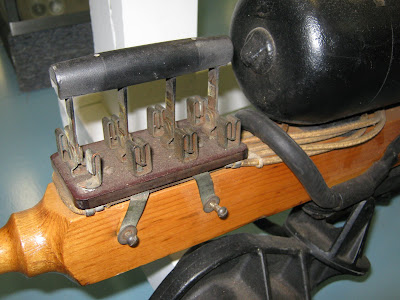 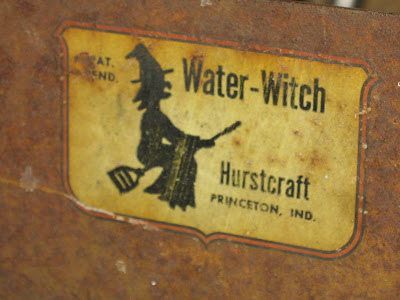 I think the “Water Witch” is used like an oar only the metal grates swivel so there’s less resistance on the back stroke. 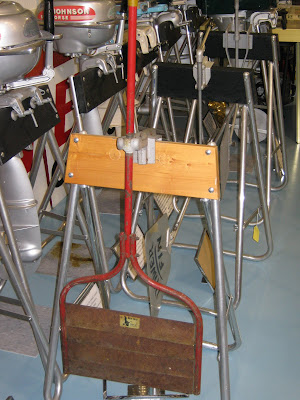