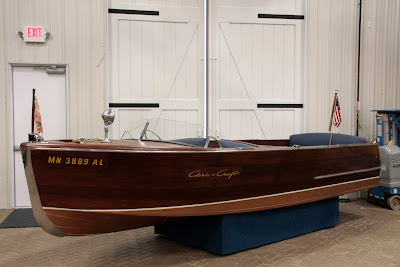 If you like Antique & Classic Boating and your planning to visit Minnesota, plan to stay for a while. After spending a few days in Buffalo and Winsted, MN for the big Warner Collection Antique Boat Auction, on Sunday it was time to head west for the 18 hour drive home. The plan on Sunday was to make a quick stop in Willmar, MN to see the Mikkelson Collection Museum and then another quick stop in Alexandrea, MN to see Bruce Olson at the Minnesota Lakes Maritime Museum.

A quick stop at an antique boat museum in Minnesota? Not a chance! Our quick stop at the Mikkelson Collection Museum lasted 5 hours… Now Plan B was to drive another hour to Alexandrea, check in to a motel, meet Bruce Olson at the museum first thing Monday morning for a quick visit and hit the road for home. Bruce Olson is a Director at the Minnesota Lakes Maritime Museum and although the museum was closed for the season, Bruce kindly offered to meet us at 9:00 AM for a quick tour. 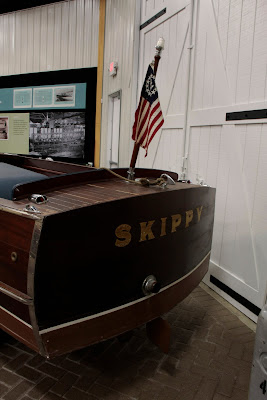 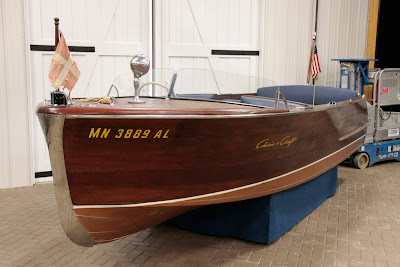 “Skippy” is owned by Tom & Carol Juul of Juul Boatworks in nearby Evansville, Minnesota and is currently on loan to the Minnesota Lakes Maritime Museum. According to The Essential Guide by Jerry Conrad, Chris-Craft produced 1,186 18′ Deluxe Utility / Sportsman models from 1947 to 1954, U-18-001 to U-18-1186. “Skippy” (U-18-034) is powered by the original 92 HP Chrysler Ace S-M-6 engine. All 1947 Deluxe Utilities were produced with Chrysler engines except one, which had a Chris-Craft B engine. 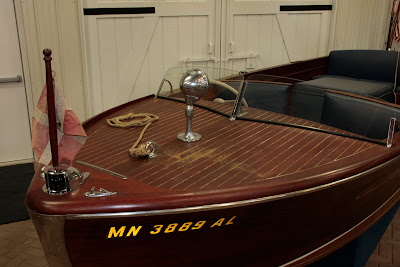 On March 10th, 1947 “Skippy” was originally purchased by Jens J. Juul (Tom Juul’s Grandfather of Hutchinson, MN) from Minnetonka Boat Works Inc in Wayzata, MN near Minneapolis. The original purchase price in 1947 was 2,390.00 – The average annual income in 1947 was 2,854.00. The originality and patina on this boat is truly remarkable. 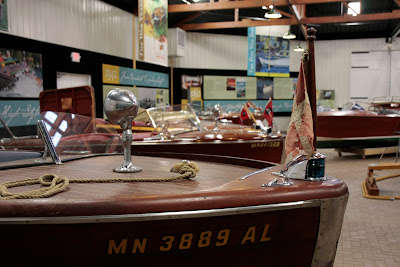 Family and friends enjoyed the boat on the Crow River which runs through Hutchinson, MN. 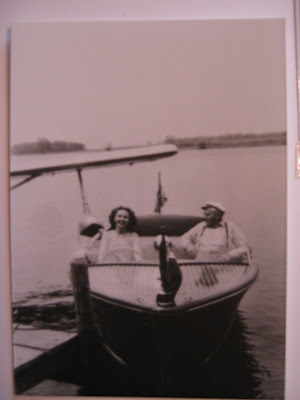 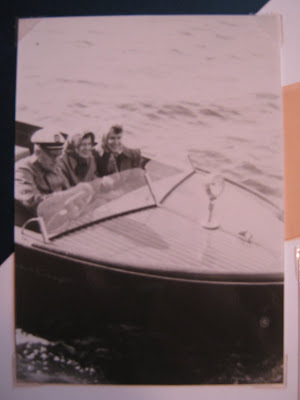 In July 1952 Jens J. Juul sold “Skippy” to Bob’s Auto Mart, a car dealer in Brainerd, Minnesota. Don Sheldon purchased “Skippy” from Bob’s Auto Mart on August 30th, 1952 and towed the boat down to Lake Miltona, MN. An “On Land” boat house was built for “Skippy” with small railroad tracks running into the lake and the Sheldon’s used the boat until 1957 and then left it in the boat house for 32 years.

In 1989, with the help of Richard Eiser, Tom Juul discovered “Skippy” in the same boat house on Lake Miltona. A few years after Don Sheldon passed away and Tom Juul finally convinced the Sheldon Family to sell “Skippy” back to the Juul Family in 1992. 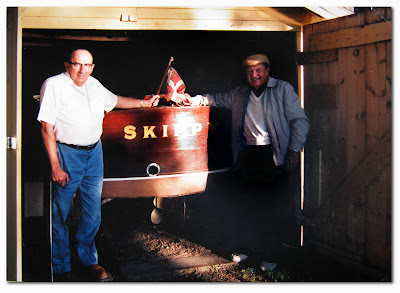 Above is a photo of Richard J. Juul, Tom’s father (left) and Don Sheldon (right) when they discovered “Skippy” in the boat house.

Below is a photo of “Skippy” outside the boat house on the rail system with young Tom Juul. Tom went on to become a popular wooden boat restorer in the area, with over 24 years of restoration experience. Many of the boats in the Mikkelson Collection Museum and in the Minnesota Lakes Maritime Museum have been restored by Tom at Juul Boatworks, in Evansville, MN. 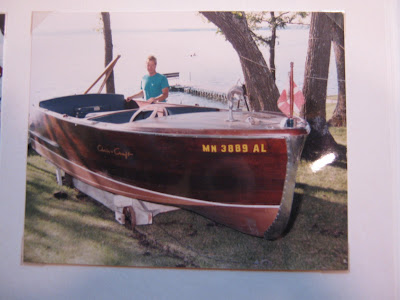 After being out of the water since 1957 Tom completed some basic service on the boat such as cleaning out the fuel tank and carburetor, etc. After soaking up the bottom for 3 days, “Skippy” was successfully re-launched after 35 years. Also some minor stain and varnish was applied as required, careful to not damage the original Chris-Craft script on the hull sides. Also, Classic Boating did a nice story on “Skippy” in their November / December 1991 issue. 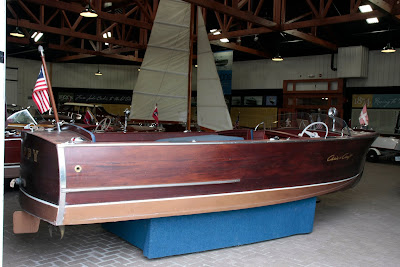 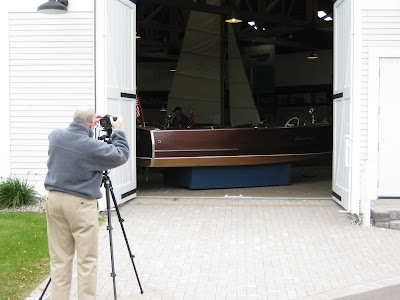 “Skippy” still flies the original National Flag of Denmark which was made by Hedvig Juul (Tom Juul’s Grandmother), wife of Jens J. Juul. Both Jens & Hedvig were Danish. How’s that for Patina? 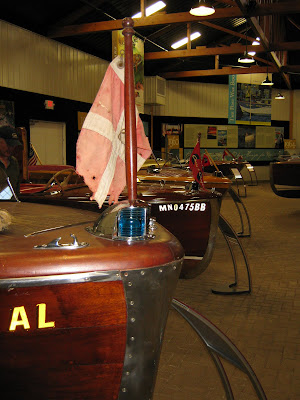 Here’s a nice shot that Mark Proudfoot got of “Skippy” in the museum with Chris Smith looking down at her. 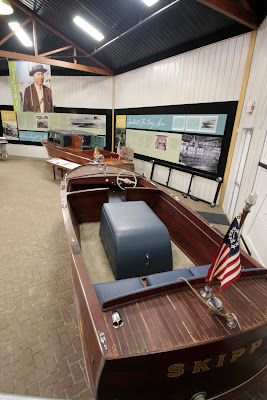 The Minnesota Lakes Maritime Museum is simply outstanding. The theme of the museum is “Celebrating Minnesota’s Love Affair With Our Lakes!” Stay tuned to Woody Boater for a full report on the Minnesota Lakes Maritime Museum featuring some of the best presented exhibits and finest boats in the country. Thanks again to Bruce Olson for taking the time to open up the museum for Woody Boater, it was a fun day.

So our quick visit to the Minnesota Lakes Marintime Museum lasted until 1:00 PM (4 hours) and then I was invited to visit Tom Juul at his boatworks in Evansville, MN for a quick tour. Well, I left Evansville at 6:00 PM only 2 hours west of Buffalo where we started on Sunday morning, a day and a half behind schedule. But we got some great stories! 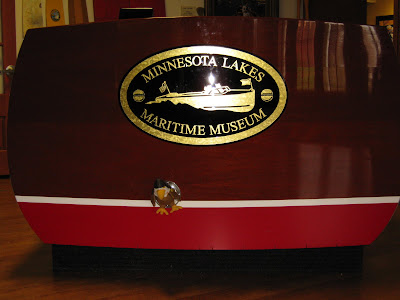