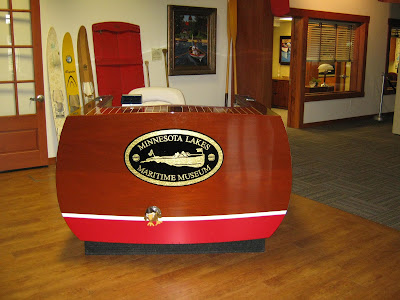 Part 2 of our tour inside the recently expanded Minnesota Lakes Maritime Museum features a few of the manufacturer’s exhibits, a great fishing gallery and a very special vintage Dodge Runabout from 1931. 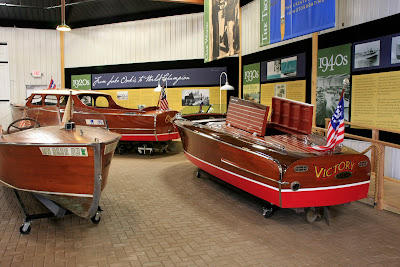 The Minnesota Lakes Maritime Museum in Alexandria expanded it facilities last fall with the addition of the new, 5,000 square foot, North Hall. The new space is home to the Gar Wood Exhibit and The History of Chris-Craft Exhibit. The extensive display of Chris-Craft’s is a collaborative effort between exhibit sponsor, Alexandria Clinic, P.A., the Minnesota Lakes Maritime Museum, and the Chris-Craft Antique Boat Club, who provided much of the historic research, documentation, and archive images.

It features an impressive chronological display of Chris-Craft company history. Beautifully designed display panels form a backdrop to the collection of restored vintage runabouts. Collectively, the display graphics and the boats tell the Chris-Craft story from the founding of the company in the early 1900s, through the early 1970s when the last wooden Chris-Craft traveled through the assembly line.

Included in the exhibit is “Bertha” a beautifully restored 1929 Chris-Craft 24′ Sedan. 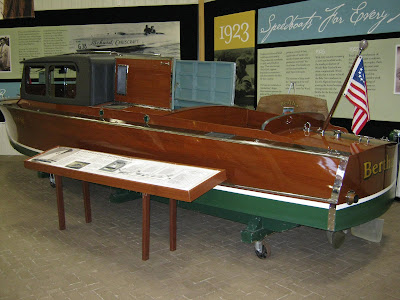 “Bertha” is powered by a 106 HP Chrysler Marine engine which Chris-Craft claimed would glide across the water at 32 MPH in 1929. 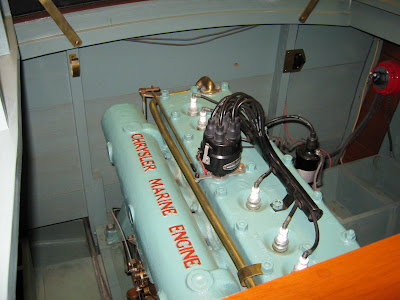 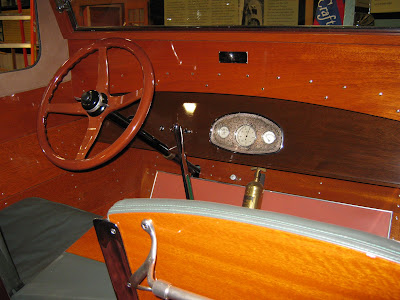 Fast forward to 1955 and another example of Chris-Craft’s innovative design & styling with the Cobra, including the famous “Tail Fins.” The Cadillac powered 21′ Cobra’s were Chris-Craft’s first post-war attempt at true high performance runabouts, with top speeds easily exceeding 50 MPH. (Chris-Craft by The Numbers – Craig Magnusson)
The 18′ Chris-Craft Cobra (shown below) is on loan to the museum courtesy of John Allen from Nisswa, Minnesota. A total of only 51-18’s and 55-21’s Cobra’s were ever produced by Chris-Craft. 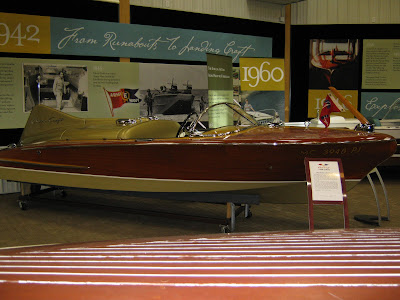 “Skippy” is an original unrestored 1947 Chris-Craft 18′ Deluxe Utility that’s currently on loan to the museum from Tom & Carol Juul, of Juul Boat Works. The full story of this wonderful Third Generation Survivor can be found on Woody Boater – November 2nd, 2010. (And no it’s not powered by a sail as shown in the image… That and the shop towel in the exhaust pipe is another example of my questionable photography skills… Going to photography school this winter and buying a new camera) 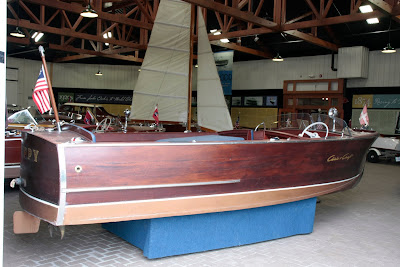 Another unique and interesting section of the MLMM is the Fishing Gallery. This is a huge collection of fishing memorabilia, period fishing gear, boats, etc that salutes several legendary fishing guides from the Minnesota Lakes area. All things Fishing. Here’s the fishing boat with the chair… 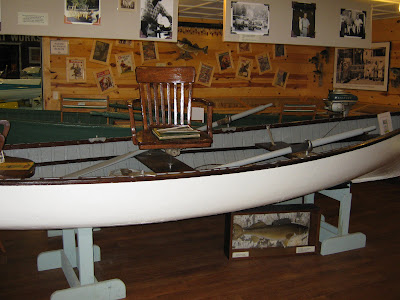 And here’s an old photo of a proud Minnesota fisherman in the same chair, in the same boat! 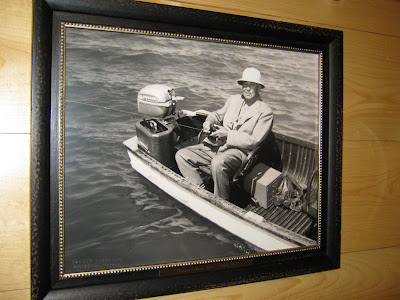 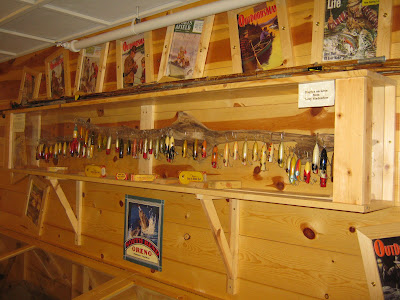 The History of Larson Boat Works Exhibit is excellent. Larson Boat Works is a Minnesota success story. The new exhibit explores the Little Falls company’s innovative approach to manufacturing and marketing. The display begins with Paul Larson’s first boat building effort at age 11 in 1905, and continues through the company’s wood boat era, and his design of the fabulous Falls Flyer. The exhibit explores the introduction of fiberglass boat manufacturing in the earlier 1950s. Below is a perfect 1958 Larson Thunderhawk Sr. sporting Twin Johnson Golden Javelin 35’s which is one of the Larson’s on loan to the museum from the Mikkelson Collection in Willmar, MN. 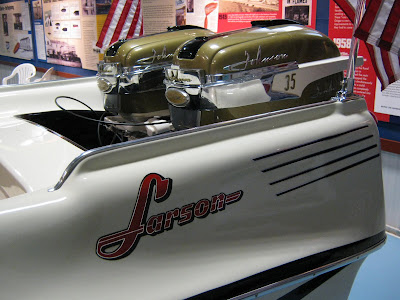 The MLMM was granted access to an extensive collection of catalogs, artwork and memorabilia owned by Lee Wangstad, Paul Mikkelson (The Mikkelson Collection, Inc.), John Monahan, and the Morrison County Historical Society.

A few Larson Falls Flyers and a other vintage Larson boats from The Mikkelson Collection, Inc in Willmar, MN are on loan to the MLMM for this exhibit. A 1953 Cabin Outboard Special was recently added to the exhibit. Below is a 12′ Larson Runabout with exposed wood decking. 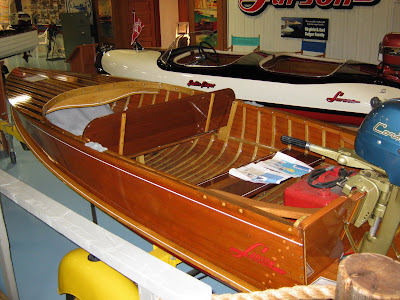 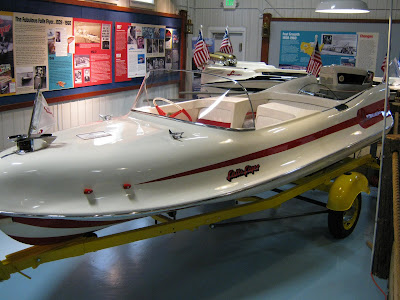 And a 1955 Larson Falls Flyer with a 35 HP Johnson Electric Start. How do I know it’s an Electric Start… Because as Paul Mikkelson explained to me, that was when they moved to forward steer Falls Flyer’s, rather than rear steer. See Paul, I was listening… 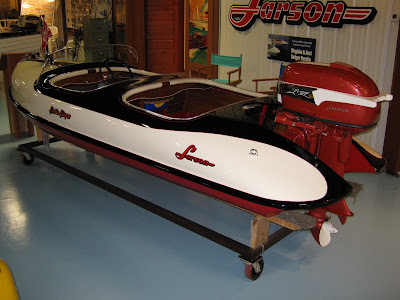 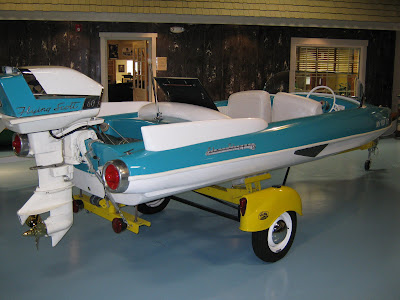 Here’s an early Red Fish 15′ Shark Hardtop with a Tall 6 Mercury Outboard. These boats were originally produced in Clarksville, Texas in the late 1950’s. 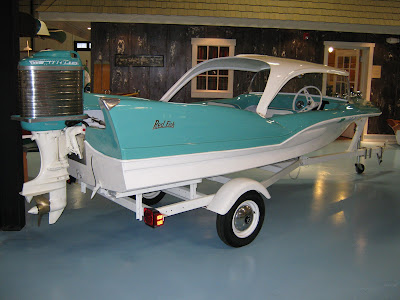 The great thing about museum’s is that you never know what your going to discover. And Minnesota is like a “Treasure Chest” of rare, antique & classic boats. In the center of the new North Hall of the MLMM is “D’ Louise” a remarkable, unrestored 1931 Dodge 21’6″ Split Cockpit (Dual Cowl) Runabout. 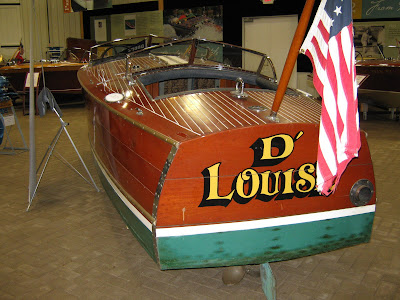 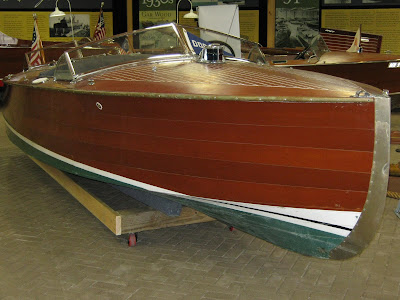 According to what I was told, many feel that “D’ Louise” is one of the most complete, original 1931 Dodge Split Cockpit Runabout’s in the country. 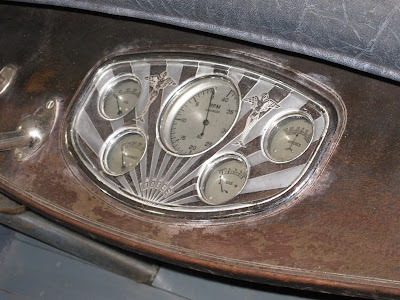 The boat was originally powered by a 125 HP Straight 8 Lycoming engine, which Mike still owns. According to Mike, the boat also has the original interior. Bruce Olson had the original Mermaid Bow Piece from the Dodge stored in the museum, so we decided to put it on for a “Photo Opp” of the rare mermaid. Stay tuned to Woody Boater for a full story on “D’ Louise”, she has quite a story to tell from the last 80 years. 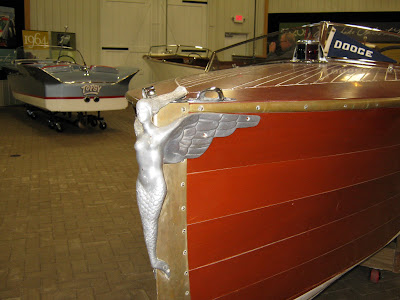 Anybody remember skiing on these Northland “Trixsters” back in the day? I do… Still have the scars to prove it… They were like the Waterbug of water skis. 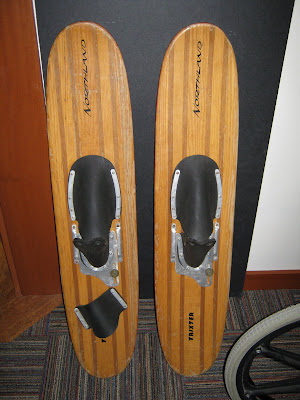 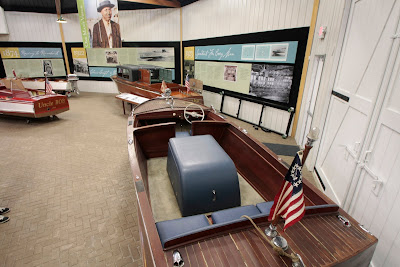 The Minnesota Lakes Maritime Museum celebrates the lake traditions and legacies, and is committed to their preservation for future generations. A visit to the MLMM is enjoyable for everyone in your family, as they discover classic boats, the grand hotel and resort history, and much more. If you have a few minutes, check out their great website at http://www.mnlakesmaritime.org/ and if your ever in the area, make plans to visit this outstanding museum. It’s the only real way to truly appreciate what the folks in Alexandria have accomplished.
Bruce Olson’s energy and dedication to the MLMM is unbelievable, almost infectious. I thoroughly enjoyed my visit to the Museum and all the new friends I made during my recent visit to Minnesota. Thanks Bruce for giving Woody Boater the opportunity to experience this awesome facility, we will return in 2011 with camera’s in hand!
Photos cour
tesy of the Minnesota Lakes Maritime Museum. 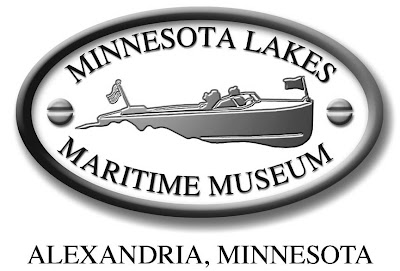