In what is to be the barn find of all barn finds. Woody Boater has been on the trail of finding all the Golden Pond boats used in the film On Golden Pond. This adventure started for us when fellow Woody Boater Ken Miller stumbled across a scrap book of Golden Pond production photos and clippings in a yard sale. The scrap book was from Jim Hendricks the guy that bought one of the boats from Marine Coordinator Pat Curtin.. This all came about on the Chris-Craft Antique Boat Clubs Boat buzz on July 2008… .Folks chimed in and one post stuck in my mind. It was from Wilson Wright on October 14, 2008. Former Executive Director of the Chris- Craft Antique Boat Club and made this statement..


“May depend on which boat you or they are talking about…There were three…One for the surface shots and one for the crash scene that Hendricks bought. The latter is still at the Holiday Inn in Key Largo with the hole in her bow. I’ve heard no more on the other after she went to Minnesota…I guess a call to the guy who took her there might reveal some details.
Then there was rumored to be a third boat used for the aerial shots which I’d heard went to somebody in Ohio. This boat could be that one….Maybe ??? Maybe not.”

A boat claiming to be one of the Golden Pond boats pops upon eBay.. After some research it appears to be the boat owned by Hendricks the owner of the scrap book purchased my Ken Miller back in July.. But the boat is bought and disappears.. Until last month where its unveiled launched and brought back to its public place in Classic boat history.. Hull number 1802 is now lovingly owned  by Jeff Thom of Minnesota..Restored by Sunrise River Boatworks. More on that tomorrow.


But what about the rumored third boat? Knowing about film, I knew that it only made sense to have multiple boats.. Cars.. Whatever you shoot.. How many Bat mobiles, General Lee’s… Lassies…Rin Tin Tins are out there? So is the third boat still out there? What about the US Mail Boat Mariah? I called Pat Curtin during the eBay boat sale. And he confirmed the third boat right off the bat, in fact there where four….Thayer IV’s… One was the Hendricks boat.. U-22-1802 a 1952 Chris Craft 22ft Sportsman … which has been reported on over the years, ….. One was the wreck scene boat also sold to Hendricks. And a third U22 was also a boat used in the movie.  U-22 1460. It was bought by a family in August1982 along with the Century Raven.. Mariah US Mail Boat.


So? Are both boats  still in the same family?  Maybe.. No one could know with out digging.. I love to dig by the way… What about the 4th boat? First anyone had heard of this… Dear god, not another one!  I don’t have the energy… Not really…It was bought and never used or refitted with the scoops, ladder.. etc…. So it was sold off and has no connection to the film..not worth another mention… and better yet no digging. Just a great teaser to get you folks to tune in.. Sorry, it was too easy… We knew that the wreck scene boat was in FLA now, the 1802 boat was in Minnesota safe and being taken care of again…the only difference between U22-1802 and U22-1460 was the year of the boat and the steering wheel. 1802 had a two spoke and 1460 a three spoke.. A very tiny detail… Hendricks did not want the ladder or scoops or compass. So he had them removed.. This has been confirmed by Hendricks son and Pat Curtin.. Both boats were restored after the film by Curtin before they were sold..


Last week.. after about two years of digging searching and making painful calls to folks that did not either know what I was talking about or did not want to be found. We found the rumored third boat. And what a find it was.. Located in the same family since purchased from Pat untouched.. With all its original movie items on it. With one stipulation… The family does not want there names mentioned or the location of the boat.. Can you imagine all the calls wanting to buy the boat.. I don’t blame them one bit.  But they did want to get the story out to protect its legacy. They had over the years read newspapers stories of the Hendricks Boat, and just recently the story of the restoration of that boat, U22 1802.. It was time, and since we were on the hunt and relentless, they agreed to do a story.  That was the deal.. So here it is.. I will let the photos tell the story.. Enjoy.

The Compass close up 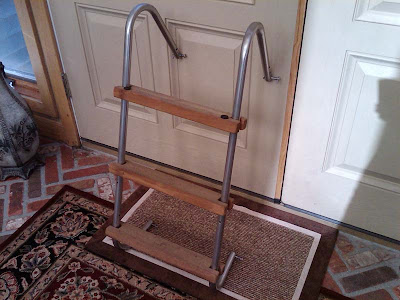 The ladder, found at home. 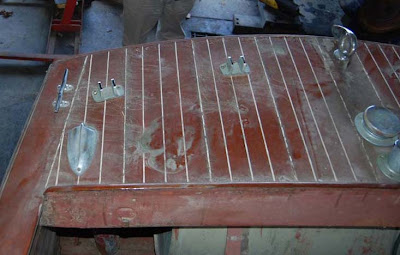 The location of the original ladder holders on the deck

43 Responses to “The Rumored 3rd Thayer IV.. The Barn Find Of The Decade!”