It’s tough to report something on this boat that’s not been covered before. But we will try of course.. I am sure the peanut gallery will chime in today and let me know what’s right or wrong with the story.. But we did find some stuff out along the way that is worth a mention.. It would not be fair to do a story on U-22-1460 and not give equal time to U-22-1802 not to mention , but of course I will. U-22-1802 is one very cool boat..

Jim Hendricks bought  U-22-1802 from Pat Curtin in 1983… After Hendricks bought 1802 and the Crash Boat, he enjoyed taking the Thayer IV around the country and talking about it… 1802 in a way became the road show boat of the film and clearly the most well known.. Or in the case of until yesterday the only film boat because of all the press and exposure.

Hendricks also owned one of the boats used in the Film African Queen. Turns out it was less of a love affair with boats as it was with Katharine Hepburn… 1802 was used in the film and was fitted out with a ladder, scoops, etc just like its older twin. Only Hendricks did not want any of that…

Hendricks came by and bought U-22-1802 and the crash boat..  U-22-1802 was shipped around and is credited for helping the hobby grow, and thanks to Wilson Wright of the Chris Craft Antique Boat Club… Also credited for making any varnished boat a Golden Pond Boat.. Which is why today we have hundreds of them all around the country..

It starts this way… “On Golden Pond Boat For Sale”.. The guy buys it and when he sells it.. It’s a Golden Pond Boat.. My neighbor at the River even has one.. It’s a 193? runabout for gods sake.. At least watch the movie… U-22-1802 is the real deal – Period. It was purchased for the film, used in the film and showed as the film boat, reported on as the boat.. Only now that U-22-1460 has been found can it be part of a family again… Choosing which boat appears in which scene is in is up to you.. I would rather scratch my eyes out than get into that.. 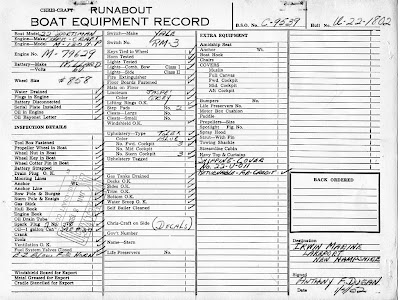 U-22-1802 is registered as a 1950 Sportsman but her hull card shows a New Hampshire delivery in early 1952..Which explains the two spoke wheel. That is the only difference.  After some time, U-22-1802 seemed to disappear from the scene until it was sold through the Antique Boat Center.. Pat Curti
n at that time was asked to make a document stating that U-22-1802 was in the film. Pat said.. ” If that’s the boat I would like to by it, but I need to see it” The boat was sold before Pat could see it. Thus creating a riff between Pat and Antique boat Center.. The boat then seemed to disappear again.. and in December 2008 it popped up on eBay… 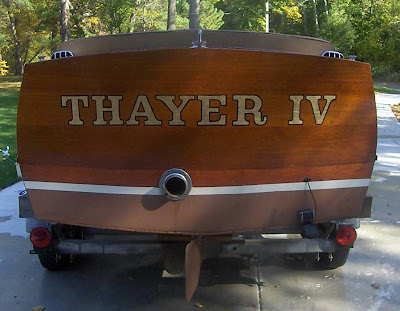 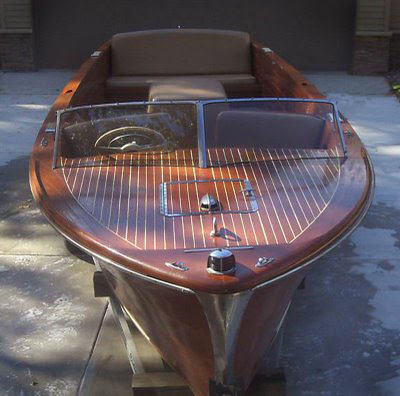 Those of you that read Woody Boater on a regular basis will no doubt remember that hoopla.. She sold for $47,000 to an unknown buyer, the seller a James Kohout.  You can read all about this in the star tribune article here. Who got it from Gary Beeman of Minnesota that is the person that got U-22-1802 from Antique Boat Center. About a year ago we got wind of her restoration at Sunrise River Boat Works. But where sworn to secrecy. We held our lip.. Wanting to run up to Minnesota and snap some pics..  Just a couple months ago, 1802 was finished to great fan fair.. We where close on the trail of 1460 and wanted to bring you a complete family reunion of sorts here on Woody Boater. The new owner and savior of U22 1802 is Jeff Thom.. Jeff is a very quiet guy who cares deeply for the boat and all he wanted to do was save it, and preserve it.. Jeff clearly sets a plan and follows through. The boat was restored saving as much of the wood as possible. A new bottom, chrome.. the works.. The only thing of note is that the wheel was changed to a three spoke wheel. We looked into that and checked with Pat and Jim Hendricks, who stated that they did not change the wheel. Jeff has the wheel and its tucked away and is part of the boats history.. Jeff stated that he wanted to save the two spoke wheel and preserve it without restoring it.  From this point on… as before..  I will let the images tell the story again.