When I was on the trail for the 3rd Thayer IV to be honest the U.S. Mail Boat Mariah was the last thing on my mind..  “Don’t forget the Mail Boat” Pat would say… Honestly I laughed.. Ya.. a Century Raven.. Ya ya.. If it’s there.. fine.. I’ll take a photo.. Compared to finding an icon of film history… Well.. I could not have been more wrong.. Pat was right, Frank, Bob, Jim.. all of us loved that boat…  Pat knew every detail of all the boats.. Down to screw holes and where they are.. This little Mail boat blew me away.. It blew us all away.. What a cool boat.. This is the find! First there is only ONE! Not three.. It’s got lettering all over it.. And is a plain Jane type boat.. mmm Jane Fonda.. more on that later..A work boat… Here she stood.. It’s the boat I secretly wanted..well and now the world knows I want it..
The Thayer IV is nice.. but I would be chicken to use it.. This sucker.. Dang that would be fun.. She had not been touched.. Not one coat of varnish or paint..And Jane Fonda and her bikini ripped bod was all over it.. Watch the movie clip here…. I aint kidding.. Even hotter than Barbarella.. and a ton hotter than in a army helmet..
The bee’s seem to have enjoyed the heck out of it over the years as well. But she was all there..un touched. We had invited Frank and his brother Bob Miklos,  experts on Century boats to inspect it and document it.. Frank and his brother also knew Pat from the film Striking Distance where they worked together.. So this was a fun way for the gang to get together again.. As Frank put it.. Pat fired me twice.. Pat said only once.. And it all started over again.. What a fun day with the little Mariah.. One of the interesting things about the innocent Mariah is that in a way she helped U-22-1460 prove her place again in film history.. You have to admit that seeing the two together is rather compelling… Forget the scoops, wheels and small details that have been commented about for the past two days to death….. This boat was never restored or touched.. It is what it was.. and is..was.. is…  In all it’s bee hive infested, moth nest rotten transom faded glory.. To me the star of the show now, no longer the a bit player.  So here ya go… I will again, let the photos tell the story.. Enjoy…. 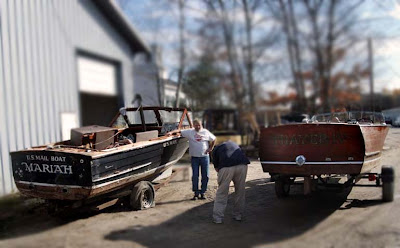 Fellow Woody Boaters.. I am done!
Tune in tomorow for a wrap up.. And then an un-edited interview with Pat Curtin.. You may not want to have your kids read it..as if they care..  As the Aug 1995 Vanity Fair story on Water World where Pat was the marine Coordinator, they quoted a worker on the film about Pat..”Curtin, a hard-nosed but experienced coordinator, was grudgingly admired but not well liked. [ says one crew member, “his attitude was ‘if you don’t like it, get the fu.k out’ he was awesome”]
« « Previous Post         |         Next Post » »

15 Responses to “Mariah, The Barn Find Of The Century”