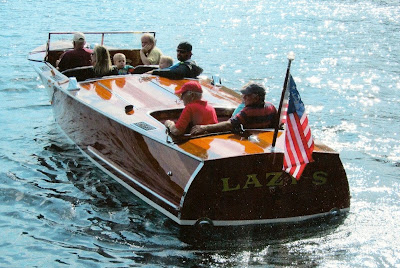 Following an 11 year restoration, in 2010 Greg Suldan re-launched “Lazy-S” on Mason Lake near Seattle, Washington. After 82 years the 1928 Gar Wood Baby Gar 28 once again brings smiles to people faces when they see the her back in the water. “Lazy-S” first brought smiles to peoples faces during the prohibition in 1928 when she began life as a Rum Runner, transporting illegal liquor to from Vancouver, Canada to Washington’s Puget Sound region. Powered by a big 1414 Cubic Inch 300 HP V-12 Kermath Sea-Raider engine and 310 gallon fuel capacity which made her fast and hard to catch in 1928. 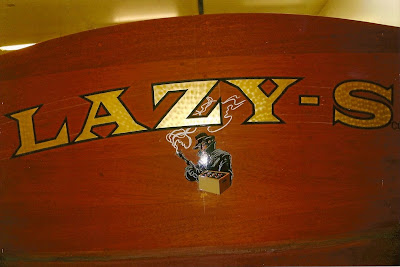 Suldan’s Boat Works Inc in Port Orchard, Washington (near Seattle) was started by Byron Suldan in 1946 and has remained a family owned and operated ever since.

The vintage Baby Gar 28 has also had many names over the last 82 years such as “Lazy-S”, “Hoot”, “Toy Yot” among others and is once again named “Lazy-S”, or “Lazy-Scoundrel” to her friends.

Over the years I have heard many stories about the 1928 28’ Gar Wood known to me mostly as the “Toy Yot”.

The one that has always intrigued me the most is about how the “Lazy-S”, (what she was named at the time) came back in the Puget Sound area.

Around 1945 Don Bancroft, a friend of my dad’s and his brother in law, John Willock were hunting over in the Coeur d’ Alene area of Idaho and spotted this old boat in a field. John said to Don, “If you want a really fast boat, this is the one you should get.” John proceeded to tell Don about the time he spent in the US Coast Guard, during prohibition, and how this was one of the boats that they knew was running booze from Vancouver, Canada to Port Townsend, Port Angeles and surrounding areas of Seattle, but they could never catch her. Due I’m sure, to her heavy construction, twelve cylinder Kermath power plant, and bulked up fuel carrying capacity of approximately 310 gallons.

In 1927 a smaller version of the original Baby Gar was introduced at the National Boat Show in New York. The new 28′ Baby Gar was an instant hit and sales exceeded those of the larger 33′ model. In addition to these stock runabouts the small Algonac plant built high speed custom cruisers and the Miss America racers. According to the book Gar Wood Boats – Classics of a Golden Era by Anthony S. Mollica Jr – In 1928 the company (Gar Wood) sold 70 units of the 28-foot Baby Gars. The production included 29 Runabout Models, 40 Sedan Models, and 1 Limousine Model. – Texx 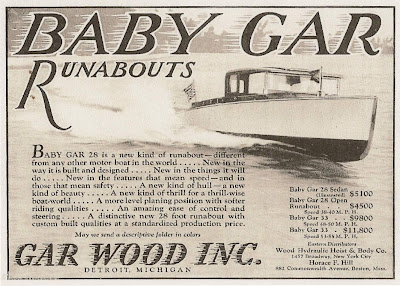 To make a long story short, Don did purchase the boat, (about 1945) and brought it to Port Orchard, where he used it for pleasure. He changed the name of the boat from “Lazy-S” to the “Hoot”, his wife Hertha’s name. During the summers he would often borrow Howe Ford’s tow truck and transport the boat to Ilwaco, Washington for salmon fishing. He claimed it was the best fishing boat that he ever had.
Below is an original photo of “Toy Yot” from 1955 – Texx 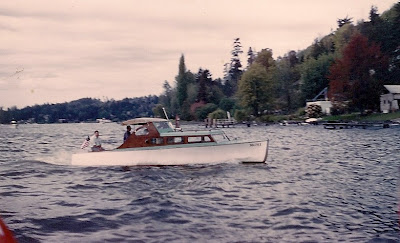 Another story that was told by Don Bancroft, was about the time he got into a heated discussion with a propeller shop over the size of the prop he wanted to buy for the boat. The prop provider, in no uncertain terms told Don that he was all wet and there was no way that the prop he wanted would accomplish the desired results, the boat just couldn’t be that fast. After bantering back and forth for some time, Don and the guy came to an agreement; if Don could make it from Port Orchard to their dock in Seattle in ten minutes, (as Don bragged about), he would give him “the damned prop”. Don always claimed that he came back with a new prop.
Not long after Don bought the boat, he pulled out the 12 cylinder Kermath Sea-Raider and installed a 6 cylinder Kermath Sea-Wolf. He said that he was tired of having to fuss with the quirky dual distributor set up that the bigger V-12 engine had. 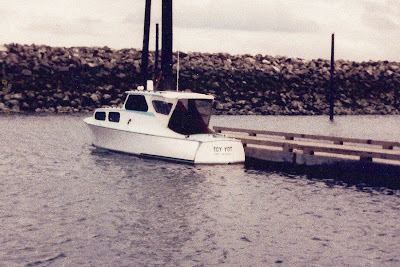 Sometime in the 1950’s, Don sold the boat to a couple of guys that worked with him at Van Vetters, a sheet metal shop in Seattle. Not much later Emory Austin, also from Port Orchard, purchased the boat. It is not know for sure when the 6 cylinder Kermath was removed and the 312 Mercury engine with tri power carb set up, was installed, probably the same time that the name of the boat was changed to “Toy Yot”. It was either the guys that Don sold the boat to or Emory Austin. Burt Connell bought the old gal from Emory sometime in the early to mid 1960’s. Burt brought the boat to our marina, Suldan’s Boat Works, about 1966.

When I saw the boat with that tri power set up and heard the rumble of the exhaust, I knew I had to have her. She was beautiful even with the mushrooms growing from the sides of the cabin. After talking to Burt Connel and (begging) with my dad, it was decided that this was just too big of a project for a 15 year old kid. Dad (Byron Suldan, Greg’s father) would buy the boat, bank roll the project and I would help in replacing the cabin and bringing the old girl back to life. August of 1967 was one best years of my life. Dad showed me and my brother Mark, how to layout and build a new cabin and fiberglass that year. We also learned how to pull an engine and replace it with a new short block. 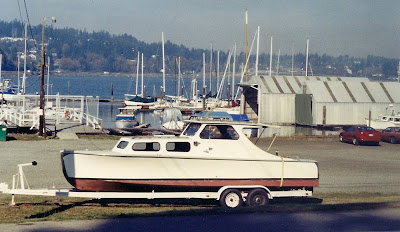 After cruising the boat for a year with the 312, it was decided that we needed just a little more power. Dad picked up a used 427ci Ford Trojan conversion from Doc Freeman’s in Seattle and had it rebuilt by Bremerton Charleston Transportation in Bremerton. The bigger engine was just the ticket, it gave us about 17 knot cruise at 2750 rpm’s, with a top speed of 32 knots at 4200 rpm’s.

The family used the boat for vacations, fishing and just having a good time. The first date I had with Sherryl, my wife, was on the “Toy Yot” with my good friend John Holladay and Sherryl’s friend Gail Plummer. There was also the time, (Sherryl was 9 months pregnant with our son Chad) we took that the boat to Blake Island and walked the island and she delivered early the next morning. Was her mom ever mad! As all things in life, times change and we move on and Dad bought a bigger, newer, 1958 Hunter boat that was big enough to take the whole family on. He sold the “Toy Yot” to Dan Stotsenberg in the mid 1980’s.

Dan had the boat for a few years and completely refurbished her and installed a 390ci Ford using the marine parts from the 427. He sold her to Scott Vagrin on a contract and then ended up repossessing her for nonpayment. Dan later sold her to Steve Sauers, Bruce Albert and a couple of other partners, I don’t recall their names. Later on Bruce and the other partners were bought out by Arlond Goodwin. 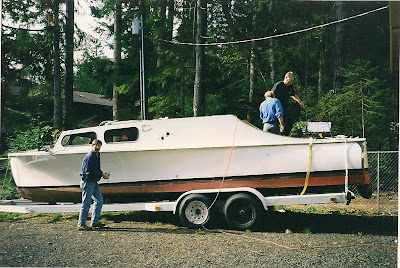 After being pushed and plied by drinks supplied by my good friend, John Lee, I purchased the “Toy Yot” from Steve and Arlond in March 1999 and have been working on her ever since. The photo above is right after Greg Suldan purchased the Gar Wood in 1999 and they were getting ready to begin removing the cabin top from the boat. – Texx

I, along with my friends; Andy Schwartzbacher, John Lee, Marshall Maring and Bruce Bronson, cut the cabin off the “Toy Yot”, repowered it with a 534ci Ford Sea-Master, 1.5:1 gears, 18×21 prop and started her journey back to what she has become today, the “Lazy-S”.

Here’s Greg and his buddies below after the old cabin top was finally removed from the boat. 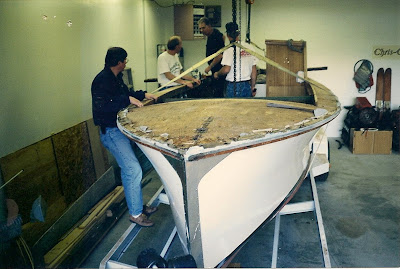 After all those years, numerous owner’s and three different cabin configurations, Greg Suldan respectfully restored the 1928 Gar Wood back to her original form. Once the old cabin top was removed from the boat, the decks were carefully replaced. Greg noted that after the cabin top was removed, a careful inspection of the original bulkheads provided evidence that lead him to believe the Gar Wood 28 was originally delivered with a sedan top in 1928. – Texx 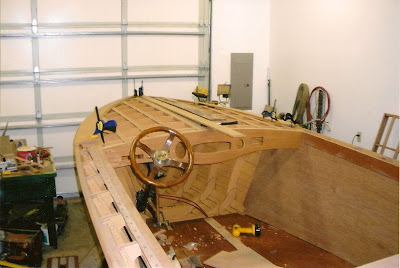 The hull side planks were replaced starting from one plank above the water line. Greg also noted that to his knowledge, this Gar Wood still had the original rivited bottom from 1928. Although this remains a mystery, during the restoration he observed that not only was the bottom rivited, but the boat appeared to have twice as many frames (on 11″ centers) as was the norm for the period. Greg speculates that this may have been done to further strengthen the bottom for the V-12 Kermath and the high speeds it was capable of back in the day.
During the retoration, a new transom and stem was also installed. 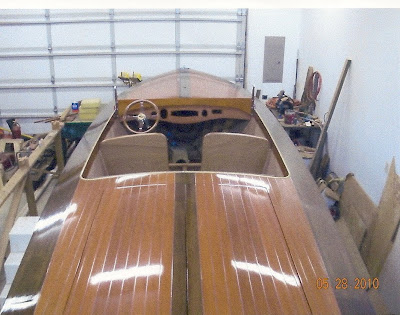 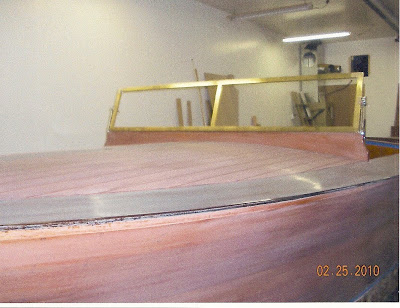 The restoration work began in 1999 and was completed in the Summer of 2010. 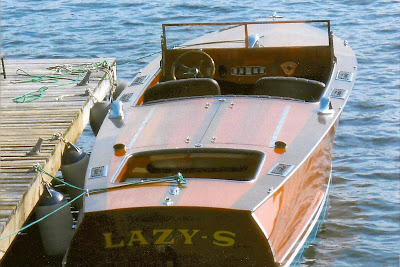 And once again the “Lazy-S” is back where she belongs in the water near the Seattle area where 82 years ago she was used to illegally smuggle liquor down the Pacific Coast from Canada, doing her part to keep Seattle wet during the prohibition years. If only a boat could talk, Im sure she would have some interesting stories to tell.
Thanks to Greg Suldan for sharing the story of “Lazy-S” with us and for transforming this beautiful, rare Gar Wood 28 back to her former glory for everyone to see and enjoy. 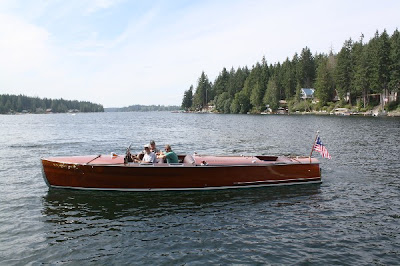