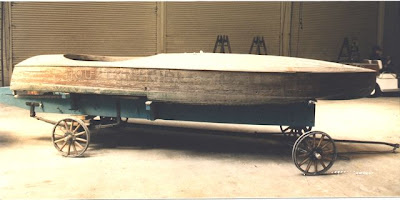 Commodore Henry Faulk of the Houston Yacht Club and President of the Mississippi Valley Power Boat Association had her built. She was campaigned from Havana, Cuba to San Diego, California. Below is a photo of Miss Houston when she was found in Buffalo, New York back in the mid 1980’s. 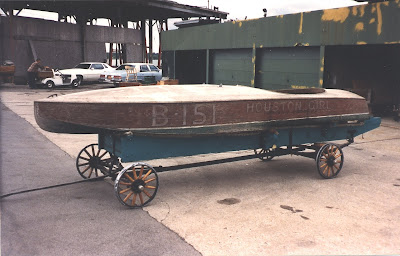 The original type Peerless 151 4-cylinder race motor for the boat was found in Vermont. 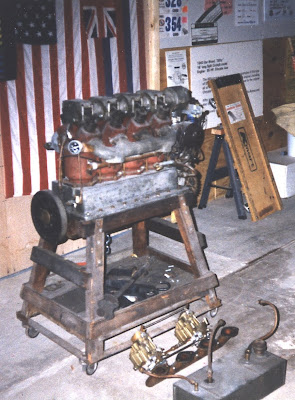 The Peerless 151 motor was restored by John Allen of Allen’s Marine Engines near Sacramento, California. John Allen is considered to be one of the top vintage marine engine restorers on the west coast. I had the pleasure of first meeting John Allen at the 2010 Lake Tahoe Concours, and it was great to learn about some of the old antique motor restorations he was currently working on at his shop. One his many specialities is restoring period Hispano Suiza marine engines which he refers to as “Hisso’s” as well as Chris-Craft A-70 marine engines, a pair which he was just finishing up for a customer. 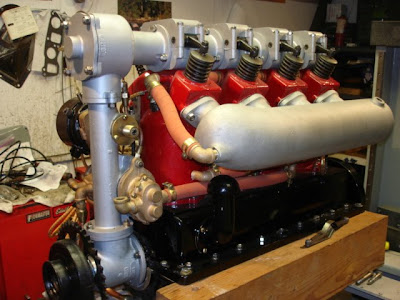 But not only did John Allen restore the motor for “Houston Girl”, he completed the restoration of the boat and the original vintage trailer too. She was completed in 2010 in time for the Lake Tahoe Concours d’Elegance in June.

“Houston Girl” is owned by Douglas & Pamela Elmore from Sacramento, California and was awarded the Most Unique Boat of Show and Best Hacker Craft of Show at the prestigious 2010 Lake Tahoe Concours d’Elegance. 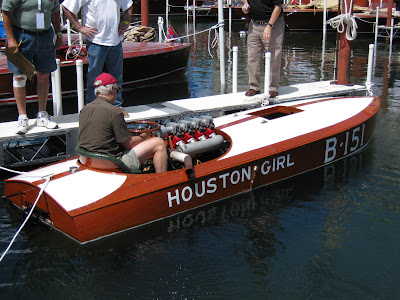 During VIP Day on Friday at the Lake Tahoe Concours many of race boats on display simultaneously fired up their motors which was a crowd favorite. 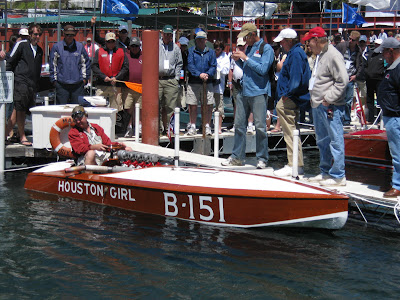 But on Monday after the crowds leave and the awards are handed out, “Houston Girl” had to be carefully removed from the water and lifted back on to her original trailer for the ride home to Sacramento. We often focus our efforts on the time leading up to the big boat shows and the time during the show when all the beautiful antique and classic boats are shined up and on display for the everyone to see and appreciate.
We thought it would be fun to give the viewers a glimpse into what happens on Monday after the big show, and to see what goes on behind the scenes at Sierra Boat Company to get a classic show boat like “Houston Girl” ready to return home. Your probably thinking to yourself right now, “What’s so interesting about seeing a boat being loaded after a boat show?” 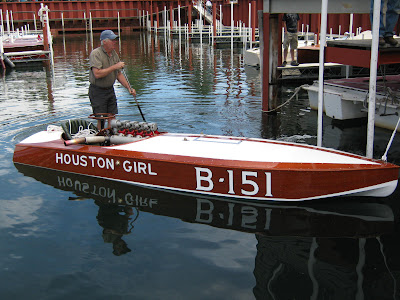 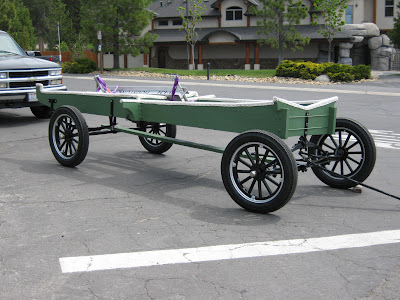 “Huston Girl” has a custom made spreader bar that John Allen made just for lifting the boat. 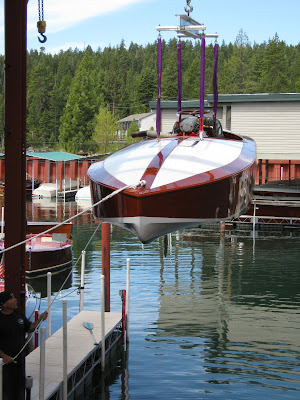 Herb Hall and the crew at Sierra Boat Company have the gantry procedure down to a science, and the entire operation happens within just a few minutes. 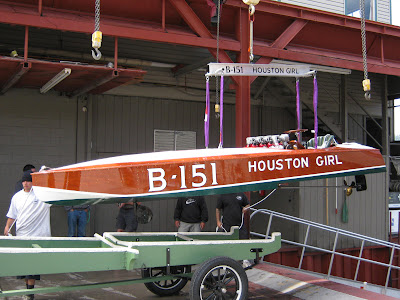 The crew makes sure that the boats are carefully loaded on the customer’s trailer, each boat receives the same care and attention from the crew regardless of size, age, or value – they don’t discriminate. 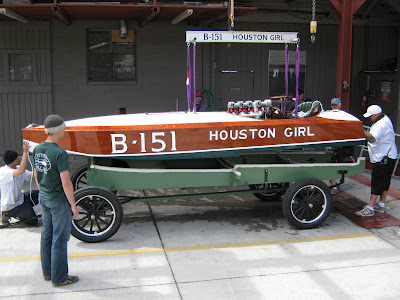 Once loaded, the boat and trailer is carefully moved (manually) across the road to an awaiting enclosed trailer. And yes I did help to push between photographs… 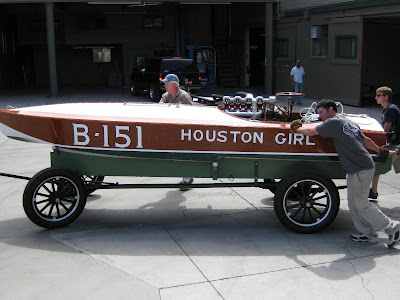 It’s hard to imagine that this boat was towed across the country from race to race with an old Model T Ford. We have all heard stories of what the roads were like back in the late 1920’s. 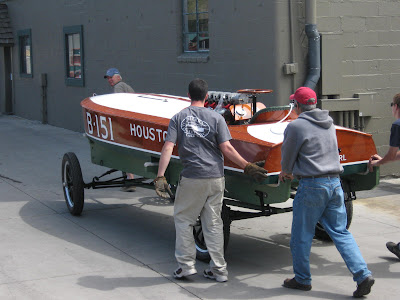 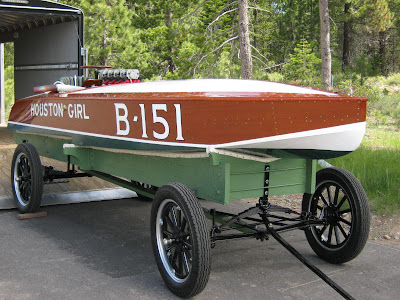 It’s just amazing to see this boat and motor up close and appreciate what things were like back in the 20’s & 30’s. The attention to detail on “Houston Girl” is exceptional. 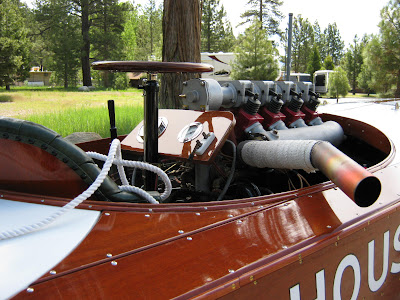 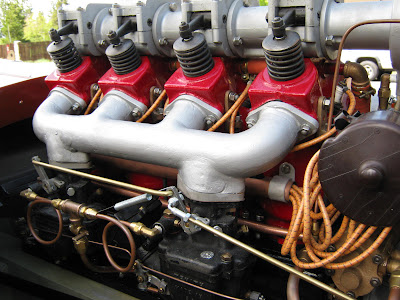 How she’s carefully moved in to the enlcosed trailer and ready for the trip home. 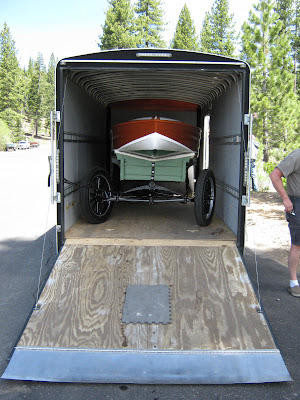 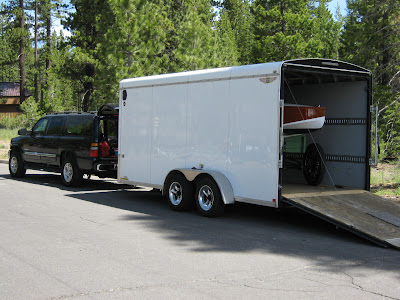 Once “Houston Girl” was loaded in to her enclosed trailer, it was time for John to help move “Lemme Go First” in to position for the Sierra Boat Company gantry. “Lemme Go First” is a stunning 1929 28′ Gar Wood Baby Gar 28-40 owned by the nearby Tahoe Maritime Museum, Homewood, Calif. 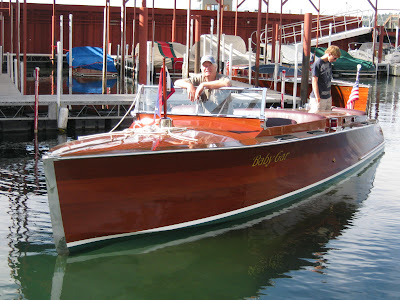 Thanks to John Allen from Allen’s Marine Engines for helping Woody Boater with this story.
Stay tuned on Wednesday for Part II of our story about “Lazy-S” from Port Orhard, Washington.
Texx
« « Previous Post         |         Next Post » »