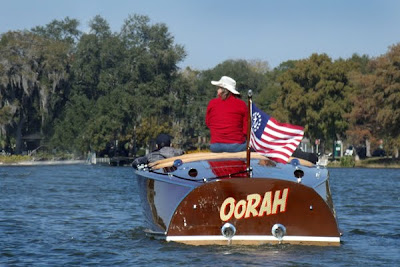 For many of the folks in the Woody Boater community, the boats are now winterized and stored away for the season, and we are now experiencing the full force of winter in some areas of the country. But if you live in Florida and the weather cooperates, you can still go boating in December for a good cause. 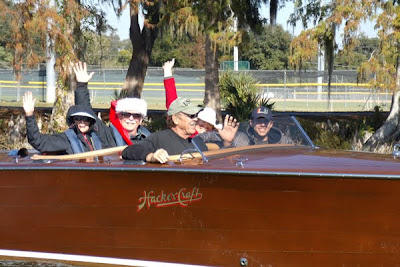 On December 4th & 5th the nice folks from the Sunnyland ACBS Chapter organized their Ho Ho Holidays weekend beginning with a Picnic Run to Lake Griffin State Park on Saturday and then the Toys For Tots Run on Sunday.
The Sunnyland ACBS Chapter was established over 25 years ago and has grown to over 640 members, making it the largest chapter in the ACBS organization. Each year in March, they host the popular Sunnyland Annual Boat Festival on the shores of Lake Dora in Tavares, Florida. This is always an exciting spring event with a large attendance from the United States and Canada, and beyond.

Sunnyland had been asked last year to join the Lake County boating community to collect toys for the United States Marine Corps Reserve Toys For Tots Foundation and this year we were asked to host the run since they knew this would be something near and dear to our hearts as Randy (Ginger’s Husband) is a Marine (1964-70).

Toys for Tots was founded in 1947 by Colonel William Hendricks of the United States Marine Corps Reserve. The official story from Toys for Tots is that the Colonel’s wife made a child’s doll and gave it to her husband to pass on to an organization collecting toys for needy children. When Hendricks could find no such organization in Los Angeles, he started Toys for Tots, collecting toys for over 5,000 families in the first year with the help of other reservists. The Marine Corps was struck by the program and made it nationwide in 1948. The Toys For Tots train logo was designed by Walt Disney and given to the Corps. 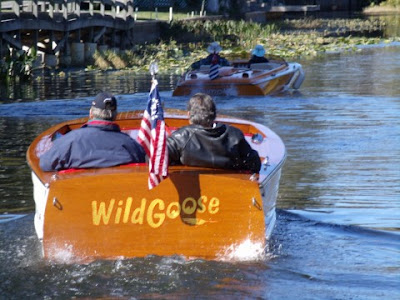 In Lake County they hold a friendly (cut-throat) competition along the lines of a bass fishing tournament with the groups weighing their toys to determine a winner. The groups consist of several organizations; marinas, housing developments, yacht clubs, bass fishing clubs, air boating clubs, Sunnyland and Sea Tow. The Toys For Tots run was moved up to the first weekend of December this year as last year they Corps had run out of toys until the boaters showed up in the second weekend with over 8,000 toys to save Christmas for the kids. 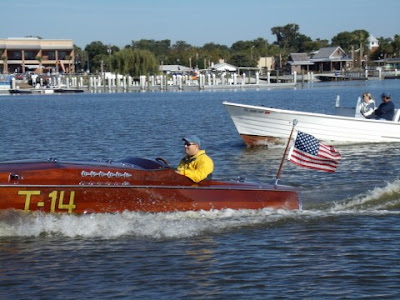 The new date coincided with lighted boat parades in Eustis and Mount Dora and the idea was hatched to create a fun filled weekend to try and bring in our of town boaters as well for fun and fellowship. Sunnyland organized a Saturday picnic run to Lake Griffin State Park led by Terry & Tim Ross. The weather was Chamber of Commerce perfect with sunny skies and only a light jacket needed on the lakes. 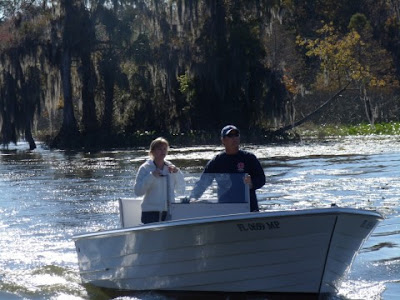 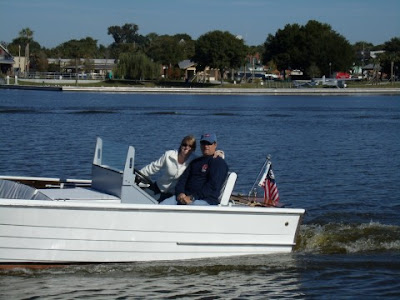 Seven boats came together for this run: 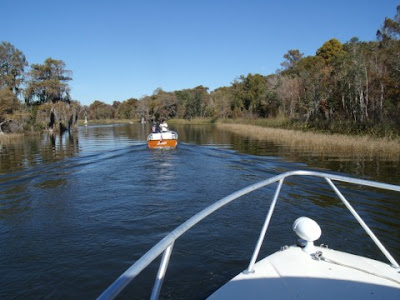 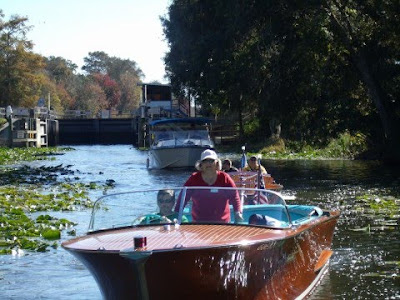 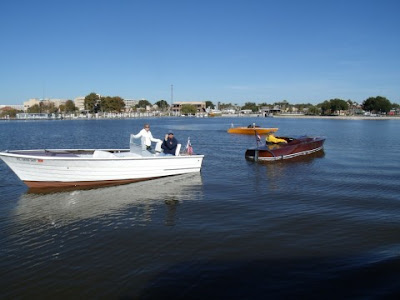 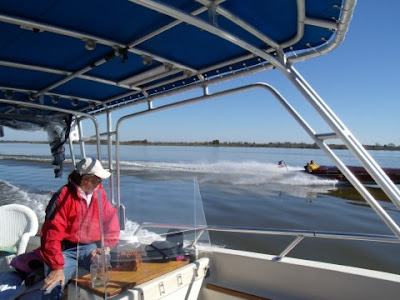 They made a full day out of it going through the Haines Creek locks over to the state park and back to the Gilbert Park docks not getting back until 6PM. 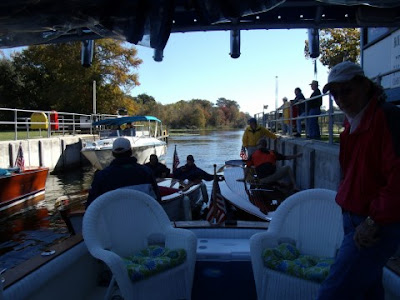 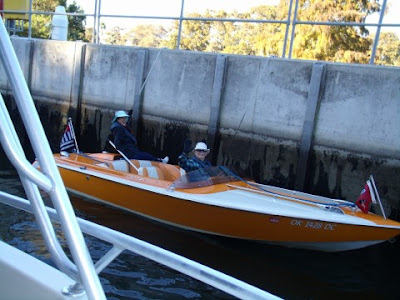 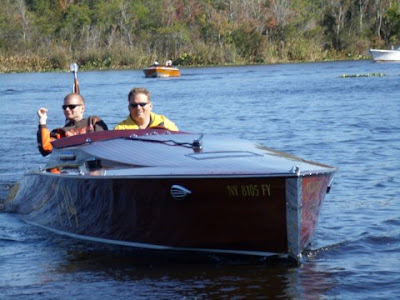 Sunday the day of our Toys for Tots run started off with a small front moving in and the weather not as perfect as the day before but still boats and boaters met at Buzzard Beach to deliver the toys that had been collected in the previous months. 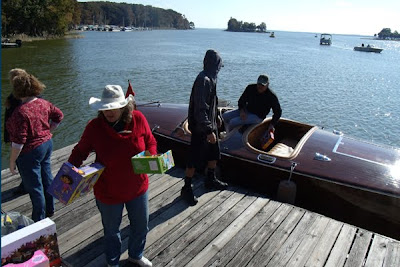 Sunnyland gathered up a lot of toys and we would like to give a special shout out to Bill Feikert of the Temple of Restoration for not only being our collection drop off point but for also having regulars like Stan Peterson, Tom Flood, Mort Pomeroy and the others bringing toys over if they were going to hang out. 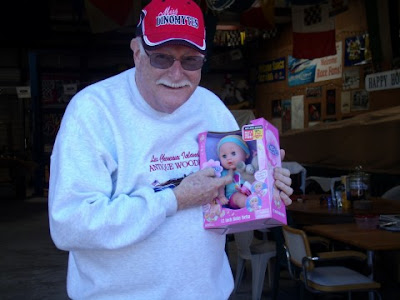 Boats for the Toys For Tots run:

“OoRAH” Randy, Ginger & Cody Clark
“Jitterbug” Tim & Terry Ross
We also had Dave Tilley in his fiberglass Chris-Craft
Linda Spenser & her husband Carl Herbst with guests in their deck boat
Jim & Denise Horton and crew with their Play Craft pontoon boat…that thing was amazing it scooted along at 52 mph…let me tell you being passed by a pontoon boat is humbling…
Larry Nichols & Susan Miller had trouble with “Pumpkin” at the dock and rode in various boats during the ride including ours, what great fun they are.

We filled the rear cockpit of “OoRAH” and had to distribute toys to other boats to make the run. We ran through Dead River where we were met by the Lake County Sheriff’s Office and escorted to Leesburg to deliver our toys along with the other clubs. 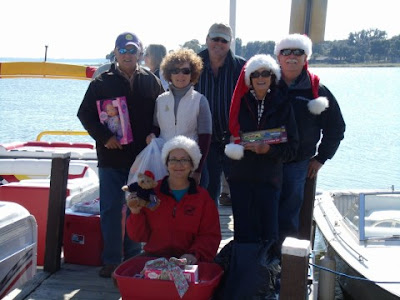 Sunnyland delivered 321 pounds of toys!!! But remember we said this event was friendly and cut-throat…well one club showed up with two giant turtle shaped plastic sand boxes and the bags of sand to fill the darn things…they came in with over 2,000 pounds and won the $250 prize which was donated back to the Toys For Tots Foundation. It was decided that next year we will be bringing in weight sets!!! All totaled over three tons of toys and $3,100 was raised by the boating community. 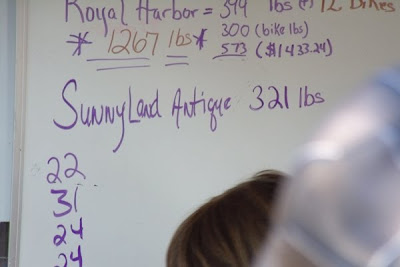 What a wonderful way to kick off Sunnyland’s boating season and to gather for such a great cause…OoRAH! Thank you to everyone who donated toys we couldn’t have done it without you.
Ginger Clark & Terry Ross (Here’s Terry – Always with a smile helping with the donations) 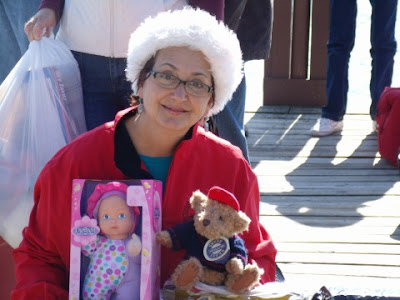 Thanks to Ginger & Terry for sharing this great story with Woody Boater and to the Sunnyland ACBS and it’s volunteer’s for assisting with the Toys For Tots event this year.

I am a proud member of the Sunnyland ACBS Chapter and am looking forward to helping Terry Ross with the Marine Youth Judging Program, sponsored by Hagerty Classic Boat Insurance at the 2011 Sunnyland Boat Festival from March 25 to 27. 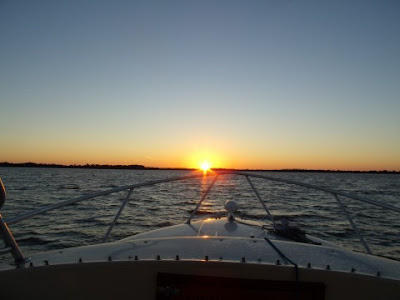