Watch this if you don’t know who Leeroy Jenkins is. Note this is a short clip from a group Video game

OK, this is now officially gotten out of hand. My pathetic 5 votes for Amanda seem rather insufficient now. Here I was thinking I was so clever using different computers to cast my votes.. Then I was told all I had to do was clear my cookies.. I even asked my staff and the readers to cast there votes.. We all were holding our own.. The social experiment was working, and fun.. Until the Sea Ray folks got involved.. with in seconds, they had matched a weeks worth of votes for Amanda for the swim suit edition competition.. And then it got even stranger. Chris craft would go up and sea ray would match to the vote. In a way sending a message that no matter how many votes are cast for Chris Craft, that Sea Ray was in control… OK.. That was over 100,000 votes ago.. YESTERDAY! Enter Leeeeroy Jenkins.. Some how over the last day, Miss Chris Craft has gained over 200,000 votes.. 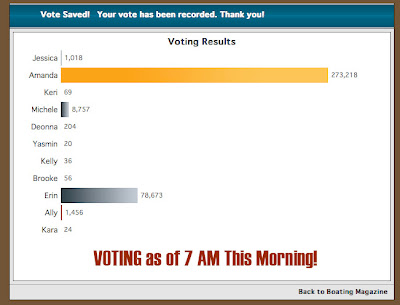 Rising at about 3 -5 votes per second. NOW… Our readership ain’t that big, neither is the Chris Craft Antique Boat club.. So? Is this even a real competition anymore? Or has technology taken over? Did Leeroy Jenkins jump the gun? What will be interesting to see, is if Miss Sea Ray can catch up, and how fast.. Will it be in an instant like before. And if so? Someone has hacked into the system. We will be watching of course.. Painfully, since this story seems to be going down the rabbit hole of the Golden Pond boats again.. UGH..Maybe Joe Martel and Leeroy Jenkins know each other.. HA!

5 Responses to “We Did Not Know That Leeroy Jenkins Likes Classic Boats!”