In November, Fellow Woody Boater Casudi brought this historic project to our attention. Much has been written about the history of Kalakala over the years. Certainly most folks around the Seattle – Puget Sound area and throughout the San Juan Islands are familiar with the life and times of Kalakala, but we thought it would be fun to share this story with the rest of the Woody Boater Community.

The MV Kalakala, world renowned as the “World’s First Streamlined Ferry” and named after the Native Chinook word meaning “Flying Bird” holds a nostalgic and magical place in the hearts of countless ferry-goers in the Pacific Northwest.

The Kalakala (pronounced kah-LOCK-ah-la) was notable for her unique streamlined superstructure, art deco styling, and luxurious amenities. The vessel was a popular attraction for locals and tourists, and was voted second only to the Space Needle in popularity among visitors to Seattle during the 1962 Seattle World’s Fair.

She served over 100 million passengers in 32 years of ferry service, and was the second most photographed man-made structure in the world, second only to the Eiffel Tower! (Courtesy of Kalakala Port Angeles) 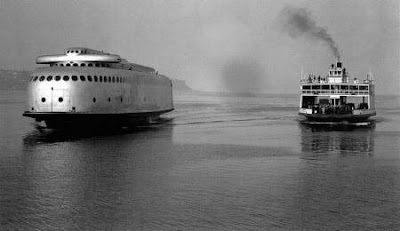 This photo (above) shows how revolutionary the KALAKALA was in 1935, compared to the BAINBRIDGE, a typical ferry of the day. (Photo courtesey Don Gray Collection)

On July 3, 1935 12:45 PM, the Kalakala (shown above) commences her maiden voyage with great fanfare. With confetti and ticker tape, an estimated 100,000 citizens crowd Coleman Dock and the adjacent water-front to witness this remarkable event. Under command of Capt. Wallace Mangan the Kalakala makes a speed of 17.3 knots and is expected to do better after refinements are made. On board are 500 guests of the Puget Sound Navigation Company. 8000 people greet her as she makes port in Bremerton at 4:00PM. At 4:30PM she departs with 2000 school children for a cruise of the sound and upon her return she is open to the public from 6:00 till Midnight when she leaves to return to Seattle. (Photos courtesy of Kalakala.org) 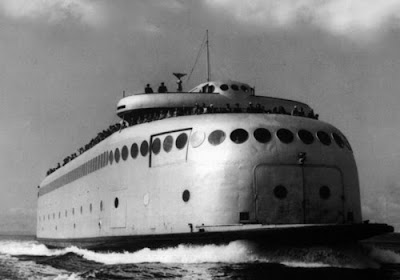 The sleek aerodynamic styled Kalakala utilized 5 decks and had room for over 2,000 passengers, plus automobiles on the lower deck.
The Kalakala starts daily service from Seattle to Bremerton. Starting at 6:30 am, she makes six round trips daily. Fares are 45 cents for passengers and $1.10 for autos and driver. Every evening at 8:30 she leaves Seattle for a “Moonlight Cruise” that lasts until 12:30am. Cost is $1.00 per couple to dance to Joe Bowen and the “Flying Bird Orchestra”. The red velvet chairs in the forward cabin are moved aside to provide a dance floor and music is electrically piped throughout the ship to all decks. 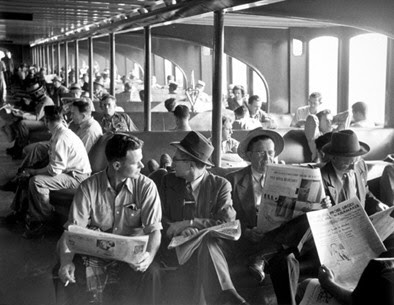 Below, the Kalakala’s famous “Double Horseshoe Cafe” which, in 1946 diners could feast on a full breakfast of Ham & Eggs with Toast and Potatoes (hey Matt – Mmmm Ham & Eggs) for .75 cents. Coffee was served with breakfast for an additional .10 cents. 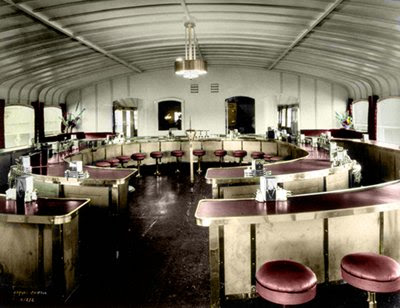 The grand ballroom (below) was used for the evening “Moonlight Cruises” complete with 8 piece orchestra. 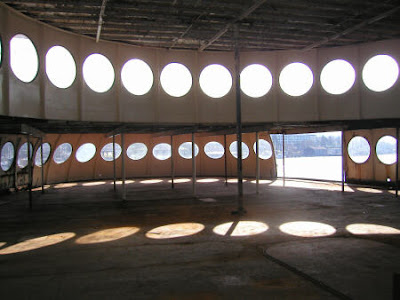 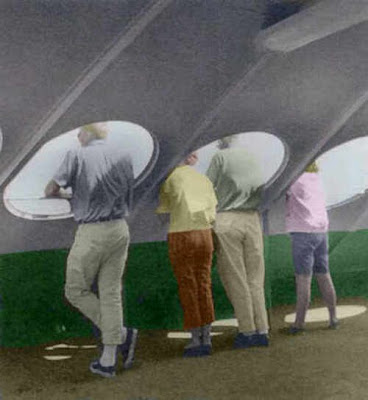 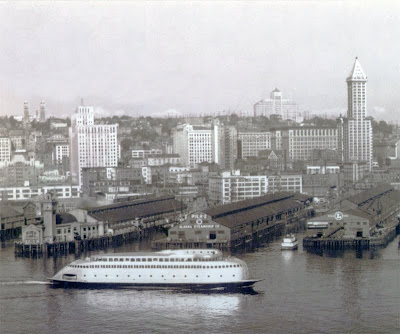 Postcards circulate around the country, showing off Seattle’s newest ferryboat. The Kalakala is an international sensation. News reels, magazines and Sunday supplements carry stories. The Seattle Chamber of Commerce predicts that the success of the Kalakala will lead to contracts for new ships in local shipyards.

October 2, 1967 The KALAKALA completes her final run as a WSF ferry and is moored at Eagle Harbor in Winslow. She is sold to high bidder Robert Ressoff of American Freezerships Co., and be converted to a crab-processing vessel for Dutch Harbor, Alaska.

November 8, 1998 The KALAKALA triumphantly reenters Elliot Bay after 32 years. She is moored at Bell Street, Pier 66 where thousands wait in line over the Holidays for a chance to tour her once elegant decks. 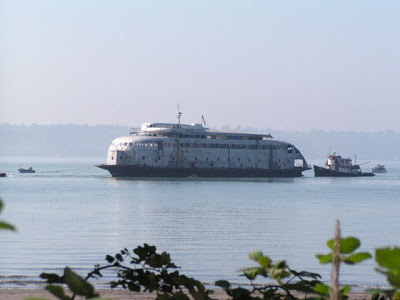 After many years of failed negotiations to save this historic vessel and an uncertain future, it appears that finally the long awaited restoration of Kalakala may soon move forward.
On October 2010 the Art Deco Society of California (ADSC) recognized the unique historic and cultural significance of the 1935 MV Kalakala, and fully endorses the Kalakala Alliance Foundation’s (KAF) efforts to preserve it. (Click on the Art Deco Society of California link above to read the complete document)
The Kalakala Alliance Foundation (KAF) has a great web site which has a complete detailed history of the vessel, a tour, and some real cool period video showing the entire history of Kalakala, click here to see their impressive web site and learn more about this story.
The Kalakala Port Angeles web site illustrates the long range plans for Kalakala’s restoration and new home. 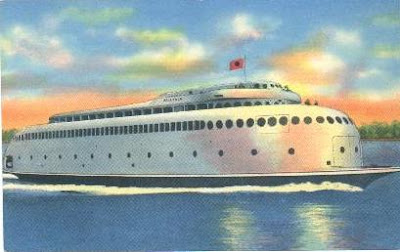 Many of the images for this story were provided courtesy of Kalakala.org, Don Grey Collection and the Kalakala Port Angeles site, thanks to everyone!
Happy Holidays – Texx
« « Previous Post         |         Next Post » »