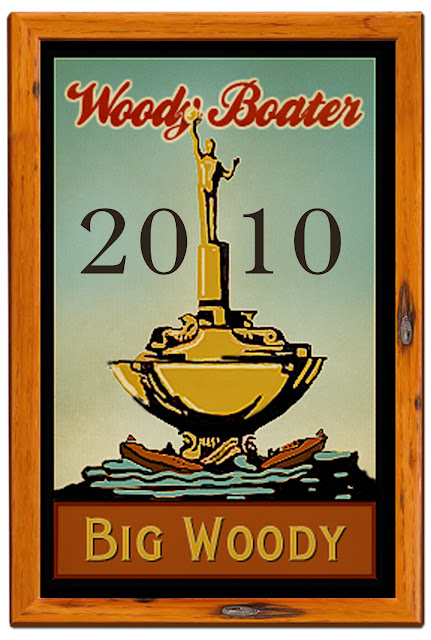 Well, if you are on this list you do now.. Congrats to all the big winners..  We looked over all that was done this year and here are the results..

Woody Boater of the Year.. Herb Pocklington.  That guy is a machine and lead the charge of the statue of Christopher Smith and Gar Wood. This was a major move forward towards honoring the history that was created by The Smith’s and Woods.. Wow! Herb had to deal with nay sayers and a tough fund raising effort.. During one of the worst economic crashes in our lifetimes.. Way to go Herb.. You now have a Big Woody!

Woody Boater Show Of The Year. Algonac. There are bigger fancier shows.. But for Woody Boater and it’s tragic un-fanciness, Algonac was the big winner. Located at the epicenter of the hobby. You could feel how it all started and the personality of the folks behind it. Summers in Algonac are a treasure.. That entire area and folks are the best.. I am proud to give Algonac a Big Woody.


Best Show For Show Boats – Bay Harbor ACBS International Show. Jesus Christ you had to be there to see what I am talking about.. The boats there were all best of show winners at any other show.. I got splinters in my lower jaw from scraping the docks.. The perfect docks.. Even that whacked out Duck head boat was killer..So here goes ACBS.. A Big Woody…

Woody Boater Best Website – Antique Boat Center. Finally someone gets it. Facebook, updated content, cool features, boats for sale. And according to the stats.. The largest readership.. By Millions.. Way to go.. You can put another Big Woody in the tent there..

Woody Boater Change The Game Award – Mecum Auctions. Not just the Warner Auction.. That was amazing.. But all the other stuff that they are doing to evolve the passion of classic boats.. Don’t auction off your Big Woody.. They are priceless..

Woody Boater Road Trip of The Year- Texx. The Trip From Calgary Canada.. to Southern California, to Tennessee, then to Fla..for the big show And BACK!  You get the Big Hemorrhoid award.. to go with your Big Woody.


Woody Boater Club of The Year. – It’s a no brainer.. The Chris – Craft Antique Boat Club. With the Boat Buzz, and new features on the Web Site.. And… … The Brass Bell.. Crap! No wonder it’s growing at a such a fast pace.. Congrats to the team.. you all can share your Big Woody’s.

Most Supportive Of The World Of Classic boating. Hagerty– They are everyplace and supportive of even the smallest shows.. They contribute time and money.. And make sure that when you smack your boat into a dock. The support is always there. So Carla…. A Big…… I can’t say it.. it, just sounds creepy.. Chris you can enjoy the Big Woody.. Wait, that sounds worse.. Who named this dang award a big woody anyway..

Woody Boater Event Of The Year- The Warner Auction.. Hands down an amazing event. I am including the parties before and after.. That entire month was amazing.. Minnesota, you are now the home of a Big Woody!

Woody Boater Babe Of The Year.  Amanda! She is clueless of her stardom, and clearly will run screaming if anyone says we have a Big Woody for her.. But with over 430,000 votes.. Clearly she is a winner with someone.


Woody Boater Film Of The Year- Mike Mayer from Lake Oswego Boat Works– For introducing original film, with words….to the hobby, not just shots of boats going fast on a lake.. or being put in the water…He is so avaunt guard! “I laughed I cried, I kissed my wife good bye and went to the Warner Auction” You can watch the film here..  Just please, no films with Big Woodys in them..


Woody Boater Barn Find Of The Year – The Third Rumored Thayer IV, and the US mail Boat Mariah.. These two boats created the biggest story of the year..the Harrison’s Barn find Sportsman, which was a close runner up.. But with over 100 comments on the Golden Pond boats.. I will send Pat and the Family a Big Woody.. They can tuck it away and one day someone will find it.. … I would love to give a Big Woody to who ever that is..

Woody Boater Boat Of The Year! Oh boy.. I am thinking here and trying to weed through which boat made the most impact on us.. Which is the boat that left me saying, god, I want that boat, I want to oil it, rub on it and just….. OK.. It’s a toss up.. First, ya got Mr White, the nicest U22 on the planet Owned by the Kadimicks, . Or  Foxy lady.. Also a very cool Higgins’s owned by the Ploetners, Or Seth Katz’s Cobra, or that Barrel Back in his show room at Katz’s marina….. Dang that thing has a finish on it that I would kill for.. Or… wait.. Wait one second, they are all from Lake Hopatcong.. So.. The award goes to all the boats from Lake Hopatcong! You all can get in a circle and share your Big Woody!

Woody Boater Destination Of The Year. Michigan.. Between, Hessle, The St, Clair, and Bay Harbor.. It’s an entire state of Woody Boat Bliss.. That poor state got the shaft over the past couple of years.. So now.. A Big Woody..

Woody Boater Thing I Would Not Miss Ever Award. Sunnyland Show- I can’t keep giving this show the best show award.. But it should get one each year. The volunteers, the location , the time of year, the people, the boats, the weather, the food.. Wait.. the food is normal and boring..Wait, Chicken on a stick.. Ahhhhh!  everythinge is fantastic, the flea market… The pals, the.. it goes on and on.. Just like a Big Woody!

5 Responses to “Do You Have A Big Woody?”