Thanks again to fellow Woody Boater Troy for sharing another wonderful Woody Boater adventure, this time with a full crew of Bridal Shower ladies, what a fantastic idea for a party.Take it away Troy.

“We were trying to make it a surprise, but since Sam had to get time off from work and all it was pretty tough to do.  The Bridal Party consists of 5 Young Women and Sam, our 25 year old daughter.  Then of course there are the Mothers, a couple of friends, and a Grandmother. It’s all smiles..OK two out of three aint bad. OK, Troy, I will smile one more time for your Geezer friends on your dumb boat website! The Happy Couple before picking up the gang in Wiscasset
The plan was simple enough.  Convince Sam, with Jason’s help of course, that we wanted to do one last nacho lunch at The Osprey before the wedding.  Sam and Jason would come to the house around 10am, we would get into American Beauty and take the long way to Robinhood Marina, via Wiscasset.  All the ladies would be waiting at the Wiscasset public dock at 11am where we would pick them up.  Flawless right?  Well Sam is a bit suspicious anyway and then one of our neighbors bumped into Sam on her way to the house and said something like.  So your having a big bridal shower today.  Don’t forget to tell other people who are not in the know that it is a surprise.
Unfortunately I did not get a picture of all the lovely ladies standing on the dock at Wiscasset waiting for us to arrive. The picture that never was.
All week even up until Saturday the weather channel was predicting thunderstorms for Sunday, but wow did we luck out.  It was a BEAUTIFUL hot sunny day, so before we left Wiscasset we poured up some Mimosas for the crew and were off down the Back River to The Osprey we went. The Bride to Be, Sam, and Grammy have a nice chat along the way. Remember Grammy, she is the one with the SeeDoo. 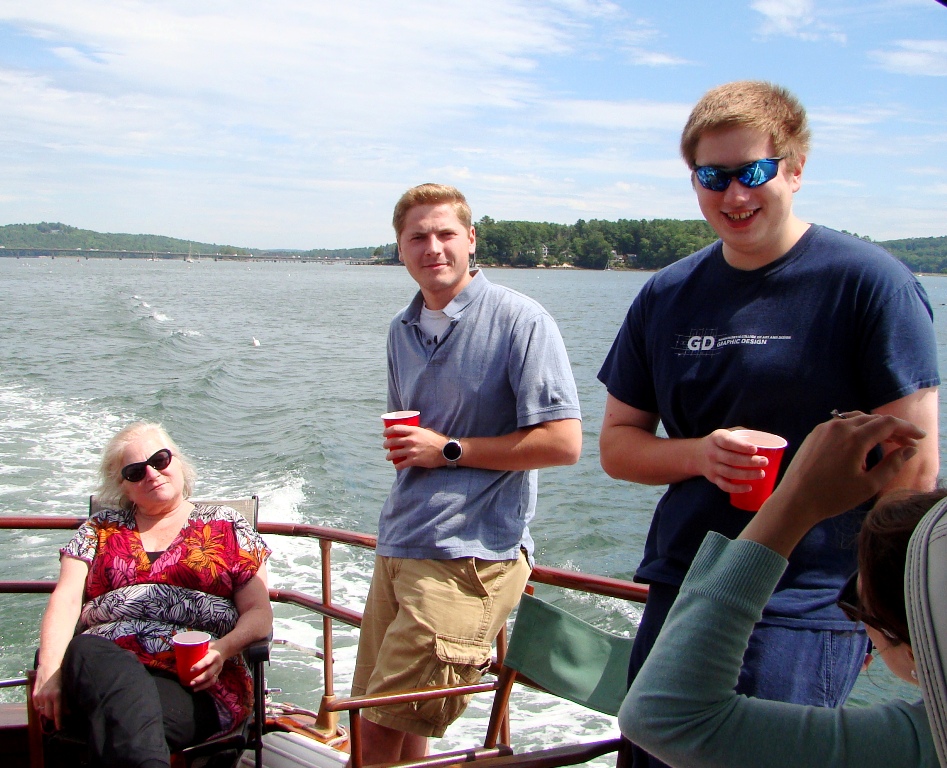 The Hinman contingency.  Jason, the Groom to be, brother Jessie, a groomsman, and Mother Sandy. The ladies enjoyed the big aft deck of AB Sam and brother Kent, one of the groomsman, enjoy some time together on the voyage.
After an exciting ride through Lower Hell’s Gate on the Sasanoa River we arrived safe and sound at The Osprey Restaurant. Did I mention that Sunday is $5 Margarita Day at The Osprey? Now I have not been to many Bridal Showers, but I am pretty sure that I don’t want to know what my little girl is getting for gifts.
Since it was not a Jack and Jill shower the Guys hung out on the outside deck on the other side of the building. Two members of the band Work Trucks played on the deck that day.  These guys are AMAZING! Following a fabulous time at lunch we had to visit the fuel dock, but were soon headed back up river.  It seemed the girls had a little interest in the cabin as we got under way. Most of the ladies found their way to the for deck as we piloted up the Sheepscot River. Kent and Maeve get a little snuggle time on the aft deck.  They are engaged to get married on 9/23/2017
After our hour long ride back up to Wiscasset Harbor the whole gang disembarked to go their separate ways.  This left Sandi and I on American Beauty to have a nice leisurely ride home to Cross Point. Heading home at a John in VA pace of 5.5kts.
And that is how you do a Bridal Shower Woody Style! PS: I left a few photo’s without captions just so Matt could add his own flare.  I am sure you will be able to identify which ones they are.

13 Responses to “Troy Goes Woody Boating With Five Women, No, Wait, TEN At Once.”