Ya cant hide Phil! We know thats your stunning and perfect Sheperd

Well, as we prep for Smith Mountain Lake this weekend. Did we mention that before. PLUG HERE. Anyway as we prep and sweat the fact that we may break down, or worse sink, we are comforted in the knowledge that Smith Mountain lake is home to the one man thats seen that, and done that before. Now, the following images were supposed to be kept hidden. Of course, that aint gonna happen, and we have Ginger and Randy Clark to thank for it all. We published these because Phil is a fantastic guy and his boats are 100% show winners and perfect. But stuff happens, and Phil has a fantastic sense of humor about it all. And heck, it helps promote the big show. THIS WEEKEND! (PlUG) Below is the story from Ginger. Phil and his bucket

We attended the Charlotte show this year.  I can’t believe it’d been four years since we were there… where does the time go?Anyway we were sitting up at the top of the hill talking to a fellow when I saw his name and shouted “you’re the bucket guy” which of course led to the retelling of Phil’s adventure to our group and Phil bemoaning the fact that Woodyboater captured it all for posterity! We all head out for the run around the lake on Friday.  OoRah hadn’t been run in awhile and we were have some minor issues with her.  Thankfully our niece Mel & her husband, Greg were out with us in their fishing boat to take pictures of the group.  Only we weren’t the ones that would end up needing them that day. Our boat blew out whatever crap was making her lethargic and we were able to find the group on the lake with our family’s help. 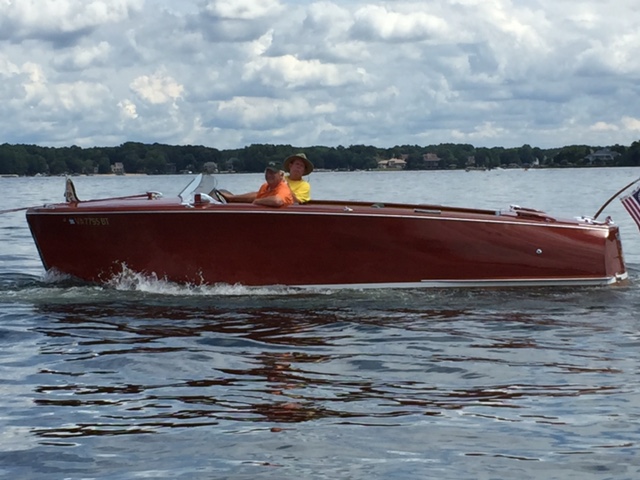 As the group took off for the run home we notice that Phil’s boat was headed off in another direction and didn’t think too much about it as he was with Randy Cunningham who knows the lake.  Just as we started out of sight we saw Phil waving.  We took off the catch the leader of our group and texted Mel to check on Phil.  When we made it back to them they had drifted into an area of shoals that kept our wooden boats standing by useless. Hey, at least your not sinking

Phil begged me not to share this with you… so, of course here are the pictures!  Turns out Phil’s engine had overheated.  Greg was a hoot taunting them the entire time… playing with a paddle, throwing a fishing line, cooling off with a water hose, etc. Plastic power saves the day! It aint a boat show until someone gets towed in!

And the best news is that at the awards banquet on Saturday, Phil’s boat Purple Haze was chosen as the big show winner!