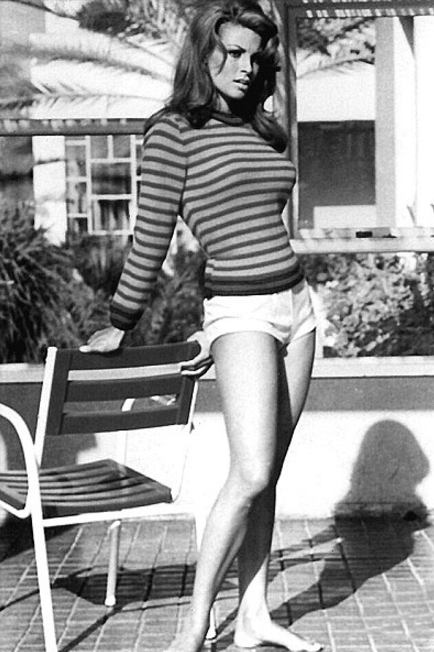 This story is from 2011 and generated over 200 comments! We love a shoot out! Join the comment train!

By the late 1960’s and early 1970’s the fiberglass boat business was growing quickly and the modern designs were beginning to take shape for both Chris-Craft and Century. The muscle car era was peaking in terms of popularity and horsepower, and the boat builders were also focused on performance with the availablity of big V-8 horsepower engines from the automotive manufacturers.

The early 1970’s was a time of change and radical new ways of thinking and design trends everywhere, as Tom Wolfe coined it – “The Me Decade.”

Fashion trends were wild, women like Raquel Welch and Cheryl Tiegs were showing off their new “Hot Pants”… The Disco era was starting to become popular, AMC introduced a radical new car called the Gremlin… Apollo 13 was launched in April 1970, the Beatles disbanded after their last album “Let It Be”… In September 1970 ABC created Monday Night Football and in October PBS began broadcasting. Joe Frazier defeated Muhammad Ali in March at Madison Square Garden, in “The Fight of the Century”… Century, Oh that reminds me, back to the story…

For the last few months, behind the scenes here at Woody Boater we have been acting as “Referee” between fellow Woody Boaters Mike Mayer and Alex Watson in a lively, but good spirited debate about what they thought was the best “Big Gun” fiberglass runabout from the early 70’s. Kind of like one of those Ford vs Chevy battles you hear about. Both these boats were offered by Chris-Craft and Century with big American made V-8’s, which both Mike & Alex currently own. So one day we suggested to these guys that the only way we could end the battle of endless yammering between them was to have a “Classic Boat Shootout” on Woody Boater and let you the viewer vote, to determine which boat should be the ultimate “Big Gun” from the early 70’s.

But in order to vote, you have to do it in the comment section below, so we don’t have to worry about the Century guys with their fancy automated voting technology. This is old school voting, and if you are worried about hurting their feelings, just vote as Mongo, or Murray, or Joe M. You can also submit your shootout vote by e-mail if you prefer to either Matt@woodyboater.com or Texx@woodyboater.com Mike Mayer says that the Mighty Century Arabian is a man’s boat, and attracts women because of it’s “Manliness.” And here’s the Chris-Craft sales brocure for the XK-19 from the same period… Alex say’s after looking at this, it’s no contest… Hands down for the Chris-Craft… Today, over fourty years after these “Big Guns” were first designed, built and sold to the public, Mike Mayer from Lake Oswego, Oregon and Alex Watson from Hessel, Michigan have two beautiful examples of these classic fiberglass runabouts. We e-mailed Mike & Alex and asked them to provide us with some comments on why they think you should vote for their classic boat. The categories we asked them to comment on ranged from Performance, Styling, Handling, Eye Appeal (chick magnet), Usability and why they like it personally.

Here’s what they had to say…

I honestly can’t engage in a discussion about why my Arabian is better than the XK. Truth be told, two weeks before I bought the Century I was hoping to consummate a deal on an XK-22, down in Sacramento. I’ve never ridden in an XK and hadn’t previously been in an Arabian before I bought mine. I can, however, tell you how I ended up with the Century, and what I love about it. I didn’t find the Mighty Century Arabian….it found me…. Right after the Lake Tahoe Concours show, we have our local Lake Oswego boat show here in Oregon. The classic 1971 Arabian was tied up to the dock with a “For Sale” sign on it. I checked it out and took it for a test ride that Saturday night. The purpose for a classic glass boat was to fulfill a need for my family. Our beloved 1929 Chris-Craft Cadet is an awesome boat, but with a 10 year-old son and a 16 year-old daughter we couldn’t maximize our family time on the water. My son is into board sports and has become a pretty good wakeboarder. While the Chris-Craft can pull a wake boarder (and throw a pretty good wake) it’s nearly impossible to get back in to the boat. I wanted a boat with either a ladder or platform along with a tow ring so we could enjoy the water around us and not just the boat. How cool is it to be 10 years old and wake boarding behind the Mighty Arabian and the awesome sound of a big 440 Chrysler V-8 barking through straight pipes?

The classic Century Arabian has turned out to be a fantastic boat for us. It is very comfortable with a practical “L” shaped interior and 3/4 captains chair. We’ve had 8 adults in the boat and there was plenty of room for everyone. The boat has lots of power and sounds awesome. The rumble turns heads wherever I go. It’s a heavy hull and throws a helluva wake but gets up on plane nicely and handles great. The Mighty Arabian At Speed On Lake Oswego, Oregon

I’ve had it up to 51 MPH but stopped there. I don’t know how much faster it will go but probably not too much. The Mighty Arabian has a very sturdy look to it. It’s not as sporty as some of the other boats of the era but it is a very utilitarian boat that also goes pretty fast. It has been my “Go To” boat for the last few months. Sadly, I’ve walked past my 1929 Chris-Craft at the dock several times, only to board the Arabian. I’m also loving the ability to have a boat in the water this late in the season. It came with a decent mooring cover and I’ve been using it regularly due to an uncommonly dry early winter. The XK Chris-Craft is more of a sport boat and while it has pleasing lines, it is less practical as a family boat, in my opinion. The biggest reason I chose the Arabian is because I really wanted a safe and reliable family boat. After researching the XK’s, I had learned the startling fact that many kids have gotten injured on them. Several fingers have been stuck in the steering wheel and I’ve heard that many kids have had to have their fingers amputated because of this. Century was much more forward thinking and provided a nice, safe ‘rope like’ steering wheel. But seriously, it’s been a great boat and I’ve been surprised by the number of compliments I’ve already received on it. I wasn’t expecting so much respect for such a late model classic boat. After only a few months of ownership, and regardless of the poll results, this is a boat I will keep for a long long long time!

And in this corner, with both Six-Guns firing, here’s Alex Watson’s comments…

Here’s my thoughts in regards to my classic 1970 Chris-Craft XK-19.

Handling / Ride
Though I haven’t driven many sport boats, I believe the XK-19 Chris-Craft must be among the best riding boats of its size. It’s Jim Wynne-designed “Deep V” hull — still the dominant feature of modern offshore powerboats — provides remarkable comfort and excellent directional control, even in significant chop. In fact, because the “V” extends right to the transom, the faster one goes in rough waters, the smoother the ride; the boat is literally skipping above the waves on the rear-most portion of its “V”.

Styling / Design
So many things of the late ‘60s and 70’s have become cliches of their era — pedestal seating, digital watches, etc. While the XK-19’s styling is of that vintage, it is not “period.” Balanced design rises above the excesses and fads of any era. Dick Avery’s work on the XK-19 bred the bold muscle of America with the softer elegance of Italy to achieve something beautiful in any time.

My boat has been painted a much deeper blue than the factory color. The quality of paint (Imron) is vastly richer and glossier. Purists might not like it, but I can’t imagine this boat looking any better than it does in this color. Eye Appeal
Whenever I launch the XK-19, people of all ages gather. They ask questions. They smile. They love it. I am particularly struck by what young kids think. Though fed a steady diet of “slammed” and “donked” cars in popular movies, music videos, and electronic games, they find the XK awesome. What do I think about it? Each time I approach it at the dock, I think “cool.” Not McQueen cool (the Grand Prix fits that bill much better.) Connery cool. Yeah, Bond would drive this. The difference in performance between the two boats is night and day. It makes sense that the “Deep V” hull of this model requires more time to plane than a flatter hull. More time or more power. I chose power. The 383 makes this boat LEAP out of the water compared to the older 327.

Like most Woody Boaters, I prefer original power. But this boat makes an incredibly strong case for re-powering. The fast lines and excellent hull deserve faster throttle response and higher top end. What is top end with the 383? I don’t know yet. We’re still breaking in the motor. With a properly tuned prop, I’ll be disappointed not to touch 60 MPH. Usability
What is this boat’s purpose? To make you look good, so you can impress your friends and attract girls. To go quickly, so you can… well… ditto. And to raise your heart rate. How “useful” it is at these tasks? 10/10. Can you fit groceries in it? Several bags. Luggage? Same. People? Four adults (comfortably) or two adults, three kids, and a dog (if he’ll lie down).

But let’s face it. This boat is best if your name is Bond, and your girl’s name is P_ _ _ y Galore. In that case, yes, you’ll have enough “room.” Including for the Bollinger ’75 on ice.

Personally, What do I like most about this boat? The joy of firing it up and, each time, thinking “Oh Boy.” Not any “Oh Boy.”

It’s also the joy of screaming across the water to the sound of 400+ horses. And when I make tight turns, feeling like I’m driving a fighter jet.

It’s the fun of seeing others delight in the boat’s go-fast style, even when it’s just parked. And, after I’ve docked, it’s giving in to the desire to look back, seeing the boat, and thinking “wow, I actually own this!”

So let us know what you think by voting in the comment section, or if you prefer you can e-mail us at Matt@woodyboater.com or Texx@woodyboater.com and I will post your comment as well. We can usually have it posted within a few minutes of receiving the e-mail all day, if our day jobs don’t get in the way. Voting ends at midnight tonight (Wednesday, December 7th) at 10:00 PM EST.

We will then tally the votes and give you the results of the “Classic Fiberglass Big Guns Shootout” on Thursday here at Woody Boater. Thanks for voting – Texx