Once again, we are blessed with a wonderful live-ish report from an indoor boat show, and this is one of the best ones in the country, although I will say that the Mid Ohio show was a whopper…with cheese, so its fun to see how our little universe can add some class and wow factor to the boating community. A huge salute to the folks that weather the bad weather and take the time and energy to show up with their boats.. And a huge shout out to  Bruce Bildsten AKA Rabbit, and Dane Anderson for sending in this report and photos! Here goes  from Bruce and Dane! The Minneapolis Boat Show was held January 19th through 22nd, and once again the Bob Speltz Land-O-Lakes chapter of the BSLOL had a strong showing. The show is one of the largest in the country, in a state with the largest per capita boat ownership. (Interesting fact: Almost half of Minnesota’s new boat sales made or at least initiated at the show. That’s January in Minnesota. Think we aren’t dreaming of summer?) A key feature of the show, the BSLOL has a prominent location and heavy traffic. While the main show was dominated by ever more expensive and elaborate pontoons (twin 300’s anyone?) BSLOL volunteers focused on educating attendees about the relative affordability of vintage boating and the strong support network from fellow ACBS members. Since affordability has been the theme at Woody Boater over the last two weeks, its only fitting that the BSLOL featured not one, but two, beautiful vintage Aristocrafts, a boat that can still be purchased new and custom for less than $15,000 with new outboard power. Photographer Dane Anderson noted that new “entry level” runabouts on the main show floor started at over $30,000, while some pontoons exceeded $200,000. And while the new Chris-Crafts are beautifully built and a proud representative of the name, that quality does not come on the cheap: The least expensive at the show was a 22-foot Launch that was listed at $92,000, while a 28-foot launch was $214,000. Ironically, at one point our “affordability” (thanks for designing, Matt) poster was in front of the Cobra, which required some ‘splaining to an onlooker who had no idea what a Cobra was. The BSLOL display presented a diverse collection of boats that reflected the diversity of the hobby, from the stunning Chris-Craft Cobra and time capsule Hackercraft Limousine to the Aristocrafts and another pair of unrestored Thompsons (naturally from Mr. Thompson, Andreas Rhude.) Very cool boat, don’t have owner or what it is, so read the comment section. Someone will chime in. Its very cool though

Sprinkled throughout the display was an impressive display of vintage outboards from Minnesota’s Antique Outboard Motor Club, including a completely original and very rare 1913 Evinrude, as well as a Chris-Craft Commander. As proof of glass’s class, the largest crowds at the display were often surrounding a recently (almost) completed pink and gloss black 1957 Herter’s Flying Fish by owner Don Knauff and classic glass wizard Del VanEmmerick. Like so many brands both the Herter’s (the “original Cabelas”) boat and Scott-Atwater outboard were made in Minnesota. 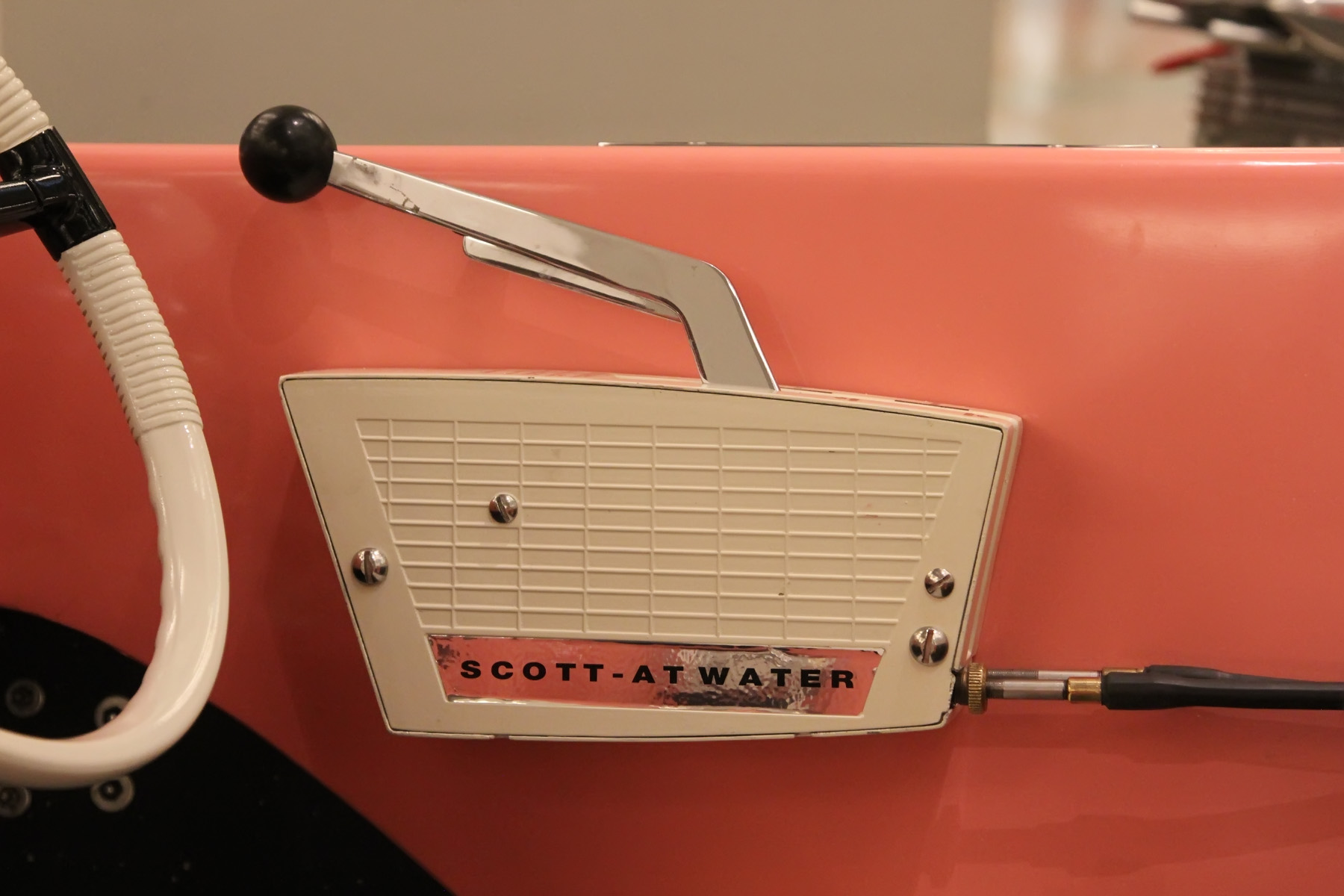 Dave Bortner’s Freedom Boat Service was also represented with an impressive display featuring an incredibly rare 1948 Ventnor step hydroplane “Rocketeer” and a 1940 18’ Chris-Craft Sportsman. As you would expect from Mr. Bortner, both boats were finished to near perfection. And since Rocketeer had six coats of fresh varnish, Freedom was touting “free varnish smells”. (It appeared to be far more enticing than the chicken on a stick offered at a nearby stand, Matt.) Volunteers from the Steamship Minnehaha, which was raised from the bottom of Lake Minnetonka and now operates on the lake, and Urban Boatbuilders, a non-profit youth development program that builds boats with youth in the St.Paul/Minneapolis area, shared the display with BSLOL. Once again, a big thanks to Woody Boater regular and BSLOL member Dane Anderson for his outstanding photography, as well as all of the BSLOL volunteers who were so welcoming and informative. And a very special thanks to all who brought their boats: It’s a big commitment, especially when Minnesota’s roads were a big, sloppy mess during our January thaw. Thats the set up 13 Responses to “They Were Sniff’n Varnish At The Minneapolis Boat Show!”