We got this wonderful heartfelt tribute to Carlo Riva last night from Fellow Woody Boater Ron Schultz and the other Tahoe gang and wanted to share some personal feelings about Engineer Carlo Riva! Here is Rons words!

Let me tell you about the personal side of Carlo Riva. And how I, or rather we, got to know Engineer Carlo Riva, using an Italian designation that he preferred. Carlo was more than an engineer. He was the rare combination of a technical guy, an artistic guy, a promoter, a people person, a man of the sea. Let’s not mention devotion and passion. And, he had style! Lunch at Lago d’isco with Carlo

Some of my friends and I met Carlo Riva briefly in 2000 at Lago d’Iseo, Italy, home of RAM the family-owned restoration and maintenance Marina, and where the boats were first built. Having him unexpectantly in our presence was an OMG moment—we were awed. Imagine, if still with us, John Hacker would walk into one of our boat shows! It was the largest gathering of Rivas in history, a monumental event called Duemila. Keep that name in mind for later. Friends like Herb Hall and Alan Weinstein had relationships spanning years before, and they joined us too. I was there with my Riva Ariston, along with Steve Lapkin and his Riva Olympic, the only two American boats, plus maybe 15 American friends. Lasting international friendships were made. A trip of a lifetime for us all.

But we really got to know Carlo Riva in 2002 when Marty Feletto and I were on a trip in Italy, using Skip and Lin Stahmer’s Riva Ariston at Lago Como. Yes, we share boats. At the last minute we heard the RHS (Riva Historical Society) Italian chapter was having a big event at Porto Carlo Riva on the Mediterranean in Rapallo, Italy. Carlo with the Americans at Duemila, Lago d-Iseo

Porto Carlo Riva is a legendary major marina envisioned and built by Carlo Riva, that Marty and I had never been to. It sounded like a great opportunity to check it out and have some boating fun, so we high-tailed it down there for the event—without a boat. Certainly someone would invite us aboard for a ride, since we had come all the way from America. We showed up at the event in the morning, as everyone was milling about, loading up and getting ready to depart for the day. We mingled and chatted with the group, but didn’t really know many people attending the event at that time. One by one, the boats left, leaving us standing at the dock! What!? Talk about rejection! 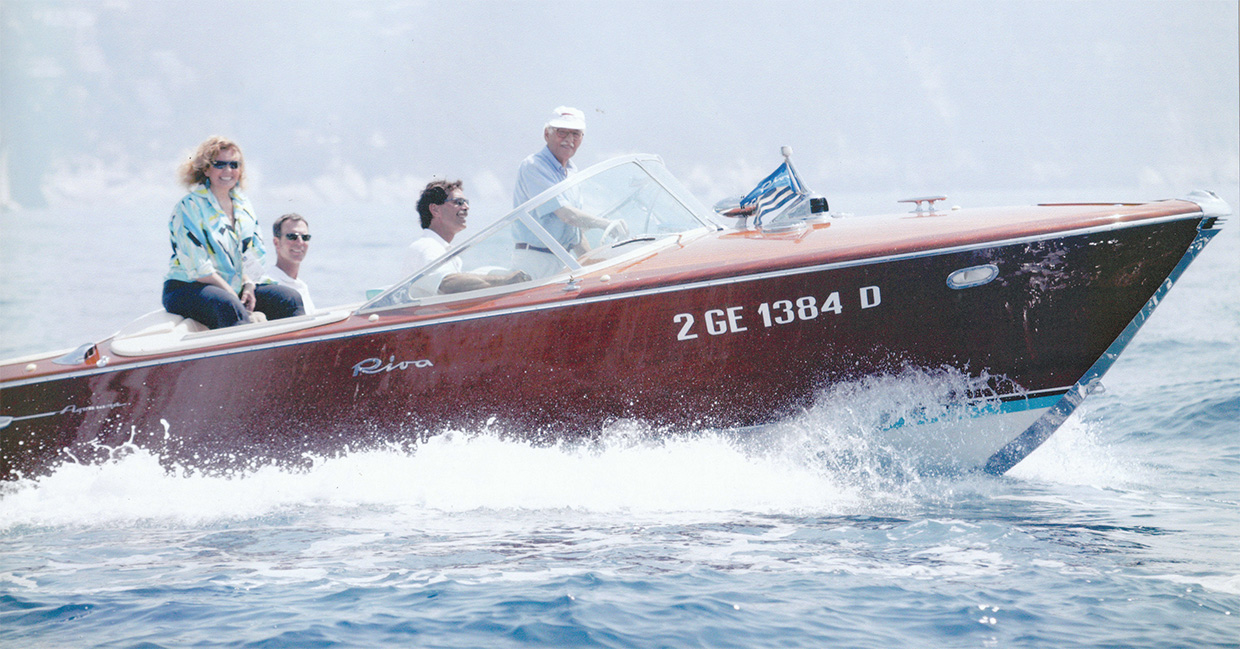 Carlo, Pia, Marty, and me

We had previously met Pia Riva, the daughter of Carlo and director of the marina, and she knew our story. She walked up to us, asked if we needed a ride, and said she “would ask Papa.” She returned quickly and said “come, Papa says you will ride with us!” Within minutes we were guests on Lipicar IV, the personal Riva Aquarama of Carlo Riva. It was just the four of us, a very personal crew, with Carlo driving. We were in heaven! It was a full day of boating, with a lengthy lunch stop at a seaside former monastery that is now a public resort.

Now, Marty has taken apart and rebuilt nearly every modern Riva wooden boat and is a meticulous owner and self-restorer of his boats. It started with Marty dropping anchor on Lipicar for the lunch stop. A comment by him, then a full discussion of the design of the anchor mechanism on the bow of Aquaramas, and Carlo lit up! He had never heard anyone admire the design, which Carlo had done himself. It didn’t hurt when Marty and Carlo snuck off to have a secret cigarette. Now friends, Marty and Carlo and I spent much of the day discussing the boats, and enjoying the boating on Lipicar IV. Back at port, we spent a little time in Carlo’s office and exchanged some gifts. A day for the history books!

It didn’t end there. We have since kept in touch, and spent time with Carlo and enjoying friendship with his immediate family at many yearly RHS events. It’s tight group. This included most recently hosting his son-in-law and granddaughter on our turf at Lake Tahoe, when Riva was the marque class at the Tahoe Yacht Club Foundation Concours. Our days with Patrizio Ferrarese, Carlo’s son-in-law and part-RAM owner, Lia (Riva) Ferrarese and Chiara Ferrarese, Carlos granddaughter, stem from our wonderful Monaco Boat Service days, along with Alex Meneghini, the general manager and great friend. It’s the iconic (that word gets use a lot) service facility in Monaco, where my boat was bought and kept for years, that was envisioned and engineered by Carlo, dug inside the rock of Monte Carlo. Yes, he did that too.

With the passing of Carlo Riva we have lost an iconic engineer, manufacturer, inspiration, and also resource, among many things. We have lost a resource because he was always passionate about his boats, and willing to share his knowledge of their history, design, and construction. How cool would it have been to have had the same if we had, in our midst, Chris Smith, Gar Wood, or John Hacker, for example, to explain things and tell us stories. But they were before my time. Carlo was in it.

The Riva Historical Society (RHS), under the direction of Piero and Mareilla Gibellini, has done a tremendous job of providing information about the design and construction of the boats so critical in their accurate restoration and preservation. It was respect of him and his creations to preserve and restore accurately—to his designs. What is significant is that the Society, via its international chapter clubs, has also provided owners with an outlet to use their Rivas, in a very social setting, that furthers the interest in the boats. It is through RHS that interest in Rivas has flourished, and Carlo knew it. There is an American chapter called RCUSA, founded by Marty Feletto, Herb Hall, Roy Dryer, Alan Weinstein, Judy Koch, Steve Lapkin, and myself. It is significant to note that there are many more Rivas in the USA now, than there were when they were new. Carlo was instrumental in supporting the Society, because he sincerely appreciated the love we enthusiasts have for his creations, and he wanted us to use them, not just look at them.

It didn’t occur to me until the other day that Carlo was fortunate to have had two Riva boat lifetimes. The first was the design and construction of the boats as a business enterprise that he ran so successfully with admirable passion. The second came in his retirement, after he was no longer in the business of building boats. This time the boats developed and expanded international demand and appreciation, leading to their use and enjoyment. He didn’t want his boats to decay or gather dust, he wanted them to be admired and enjoyed, just as he did.

Our eventful day in Rapallo is just an illustration of the kind of man Carlo Riva was. He wasn’t one to leave a guest at the dock. Others will have their own stories about Carlo, for he lived a long, full life. Carlo was a fascinating man to spend time with, talking about his boats and his adventures. He was warm and gracious, and happened to have a love of America and Americans. In one of my visits, he gave us a special hard cover book that he had had produced called “The Master Bridge.” It’s mostly a picture book about embracing Riva enthusiasts, and it tells you something when he is seen wearing Riva Club USA shirts and hats in many of the boating pics. He greatly appreciated the Riva activity we have in the USA.

In closing I have included a picture I took of the last page of the book. It is so fitting and ironic. Carlo could have chosen any picture for it, but in it he is wearing a Duemila 2000 shirt. The last page of Carlo’s book “The Master Bridge”

12 Responses to “Carlo Was Fortunate To Have Had Two Riva Boat Lifetimes.”