Fellow Woody Boater Walt Stashkiw reports in from Ohio. It reads like a formal report and all the words are spelled right. I think, not sure. Like a buried Philips screw on a pre-war bottom. I can’t tell. Regardless, it’s nice to see a cool show happening on a warm weekend! On Saturday June 24 th, the Portage Lakes 42nd annual antique and classic boat show drew a record crowd to one of the best attended shows in many years. View of the “On Tap at the Harbor” restaurant and the boat show, east side

This free event will be held from 9:00 am to 3:00 pm at the “On Tap at the Harbor” restaurant and docks, on Portage Lakes Drive in Coventry, hosted over 50 classic wood and fiberglass boats; in the water and on land displays. The show lived up to its reputation of bringing the elegance and craftsmanship of America’s skilled boat manufacturers to all the residents visiting the show. View of the “On Tap at the Harbor” restaurant and the boat show, east side

This show has been held in these same lakes since 1975. Run by the Northcoast Ohio ACBS 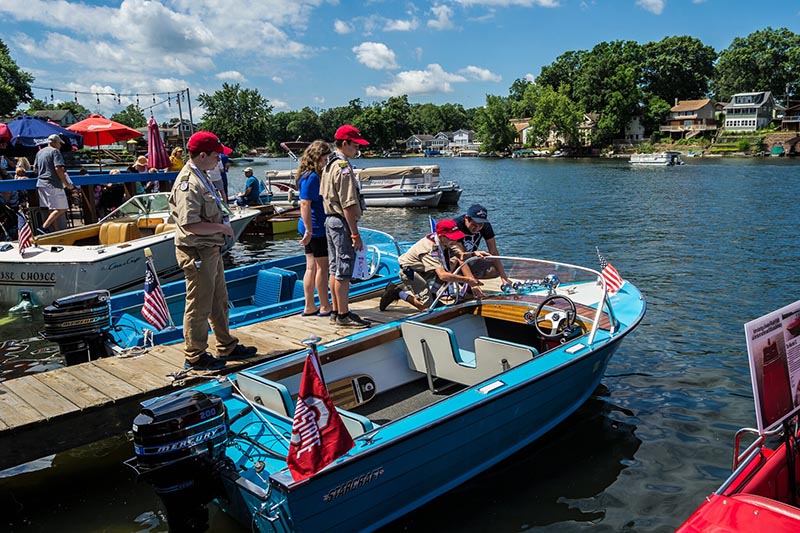 Unique to this year’s show was a contingent of “youth judges”, made up of area grandchildren of some of the participants and a local Boy Scouts of America Troop 215. These young judges were managed by club member Ray McFarland and enjoyed learning the intricacies of learning how to judge boats using the ACBS Judging Guidelines. The youth judging program is sponsored by the Antique and Classic Boat Society and the Hagerty Insurance company. The show was sponsored by over 65 local businesses and others who graciously donated funds to operate the historic show. The Portage Lakes Antique and Classic Boat show is a part of the 4th of July festivities held in the area; including fireworks, boat parade and sandcastle building at the local state park. Thanks so much for the great report Walt, looks like a fantastic event, we look forward to visiting one day!

4 Responses to “Live-ish From From Portage Lake!”