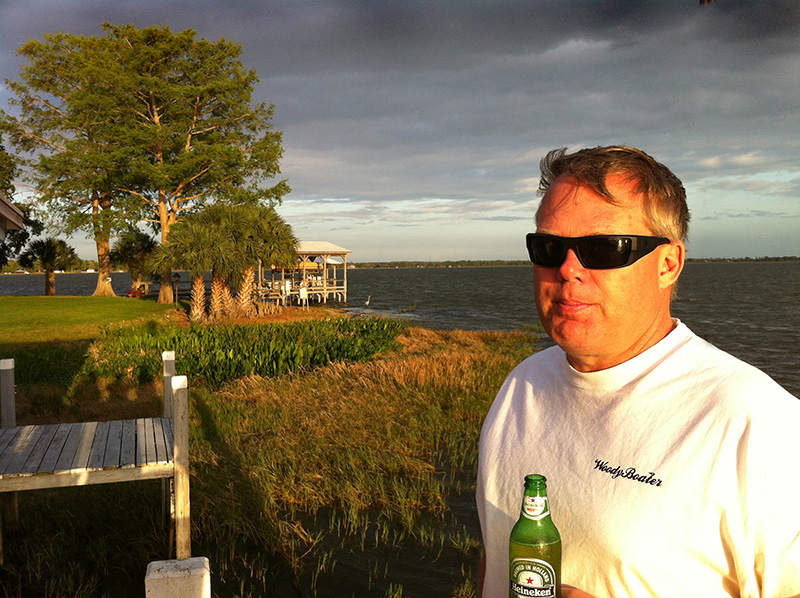 Long time fellow Woody Boater Paul Harrison AKA “Hurricane Paul” has arrived on the scene in Tavares Fla to check things out. Paul made the drive from Racine over the past couple days. Shockingly Paul did not break down on the way down, but it did take him 9 hrs to make a 5 hr drive. We are continuing reporting from Tavares and Mt Dora because this area is part of the heart of classic boating and reporting is focused on the Keys and other areas of total devastation. The good news is that it looks like Tavres did far better than other areas, but as Paul says, this is no place that you want to be right now. Lost boat in Pauls back yard.

Paul arrived later in the evening and will be gathering photos today. Paul reports that many are without Power and thus internet is not available where he is. He did report seeing a GarWood that had sunk, but it was dark, so once we know more about that, we will of course update. You may recall Paul’s famous report from Montana over a past winter being stuck in 10 foot snow drifts.

According to the Tavares Police Facebook page they report that most of the boats lost at the docks had 4 cycle engines and so only gas was spilled witch will evaporate. They say that it should be cleaned up in around 3 weeks. No mention if that means the docks will be functioning. All though, they are metal docks and from the look of things in other areas on the lake, it looks like many docks broke loose. No word yet! Ugh!

As of right now, NO report on The Palm Gardens restaurant, but we are also checking to see. Stay Tuned for reports as they come in. And a huge thanks to hurricane Paul for making the trip and reporting in.

Here is one report from Channel 9 on the docks. That’s not Paul reporting BTW. Our reporters hold beers, not microphones.


PLEASE STAY TUNED AS MORE REPORTS COME IN FROM PAUL.

19 Responses to “Lake Dora Update – Reporter Is On The Scene!”